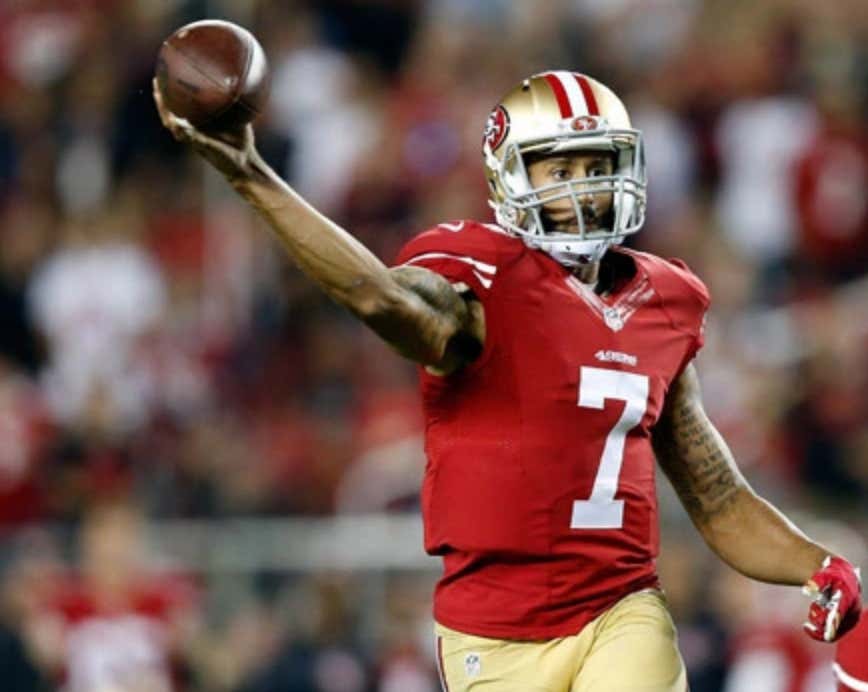 I’ll keep this short and simple- the Redskins should absolutely offer Colin Kaepernick a job. And it’s beneficial for both parties.

As we stand (no pun intended), the Redskins season is basically over. Our starting QB right now is Mark Sanchez who hasn’t had a season that can be described as “ok” since the Clinton administration. Our GM is Bruce Allen, a man who has previously given Donovan McNabb an extension when he was skipping 75% of this throws into the dirt, a man who butchered the Kirk Cousins situation in every way a GM possibly can, and a man who then “solved” the QB issue by trading a starting CB and a 2nd rounder for a 34 year old Alex Smith, and then gave him a massive extension.

So with no real future at QB, as we don’t even have a young guy (like Nate Sudfeld) developing, signing Kaep would be mutually beneficial to both sides.

For the Redskins, we make the rest of the season interesting. Kaep is probably the best QB on the market. Better than Kellen Clemens or EJ Manuel or Nathan Peterman. And it doesn’t matter than Kaep hasn’t thrown a pass in 2 years because before last night, either has our current starter. But if you asked me right now who gives a team the better chance to win, Kaep or Sanchez, you gotta go Kaep.

By signing Reuben Foster, the Redskins made it clear “we don’t care about PR”. That was the message. So if that is still true, why would they care about any backlash from signing Kaepernick? Plus, this is the Redskins. A circus for the last 15+ years. Since when does Dan Snyder care about anything…at all?

And it’s beneficial for Kaepernick at all. He wants a chance in the league? Well, then take it. If he can still play, he wins. He shows everyone he still has it. In the NFL, talent rises to the stop. If Kaep can still sling the rock and run around the field like the old days, everyone says “my bad” and moves on. I mean, it’s not like he was the only person who took a knee. Eric Reid was taking knees during the Anthem left and right, and I’m pretty sure he still is, AND NOBODY CARES. It was such an overreaction by the media, the whole taking a knee thing, and anyone who can’t see that or admit it is living in denial.

Kaep isn’t currently on a team because frankly, no team felt the headache was worth it for a backup. He would bring a zoo of media with him wherever he went and it’s an unnecessary distraction. But…if he’s starting in Washington for the last 4 weeks of the season, who loses? The Skins get the publicity they crave, Kaep gets 4 games to show what he’s got, and then EVERYONE can shut the fuck up about “why is so-and-so playing instead of Kaepernick?”

And that’s the biggest point. If he sucks, we won’t have to hear people bitch and moan about him not getting a chance ever again. And how great would that be?

The funny thing about all of it is the question if Kaep would sign to play on a team named the “Redskins”. What if they actually do reach out and he’s like “GOD DAMMIT, WHY IS MY ONLY SHOT WITH A TEAM WITH A RACIST NAME?!” It’d be the NFL’s version of that episode of Black Mirror “15 Million Merits” when the black dude who hates the system that’s set up has to then decide if he wants to buy into the system in exchange for a better life.

I think this is finally the place and the time for him to get back on the field. The Skins need a QB, the Skins as a franchise certainly have nothing to lose, and Colin Kaepernick has no place to pick and choose who he wants to play for. And even better for the Skins, if he turns them down, the Skins can be like “well at least we tried and extended our hand”.