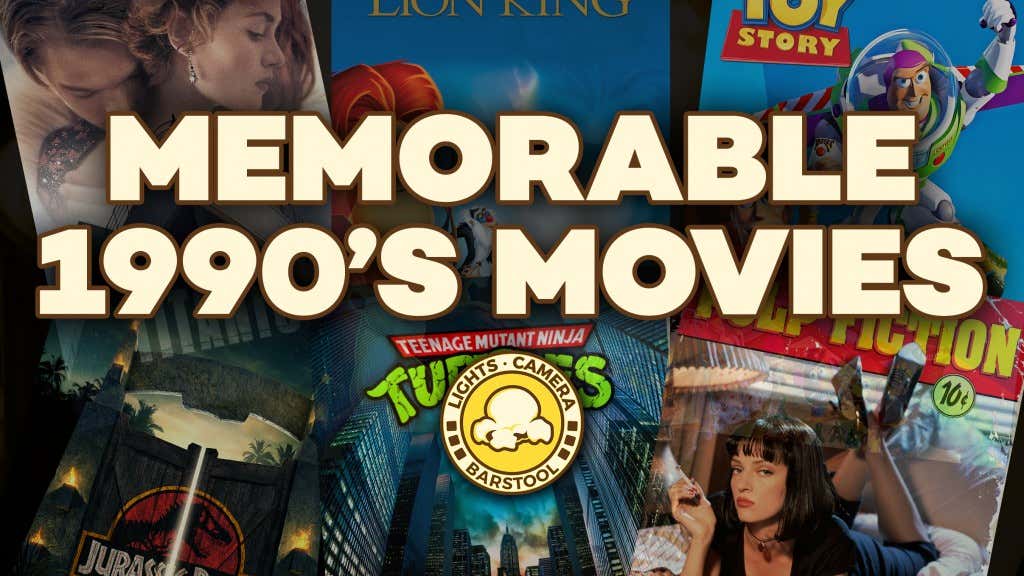 EDIT: I forgot to mention ‘Space Jam’. I am an idiot. Should’ve been Top 5.

Think about the 1990’s. Now think about the first movie that pops into your head. What is it? ‘Titanic’? ‘Lion King’? ‘Pulp Fiction’?

The movie you pick is obviously largely dependent on the year you were born. I was born in 1991, so childhood movies come to mind more than movies like ‘Titanic’ or ‘Pulp Fiction’. As a kid, ‘Titanic’ was the movie that my mom and aunt saw in the theater next door as my dad, uncle, cousins and I saw ‘Batman and Robin’. (NOTE: That memory is wildly inaccurate, as ‘Batman and Robin’ was released in June 1997, so the movie I saw was probably ‘Return of the Jedi’).

Let us know your pick on Twitter @LightsCameraPod, in the comments or on our Reddit. I’ll cheat and list the five movies that come to mind for me below. 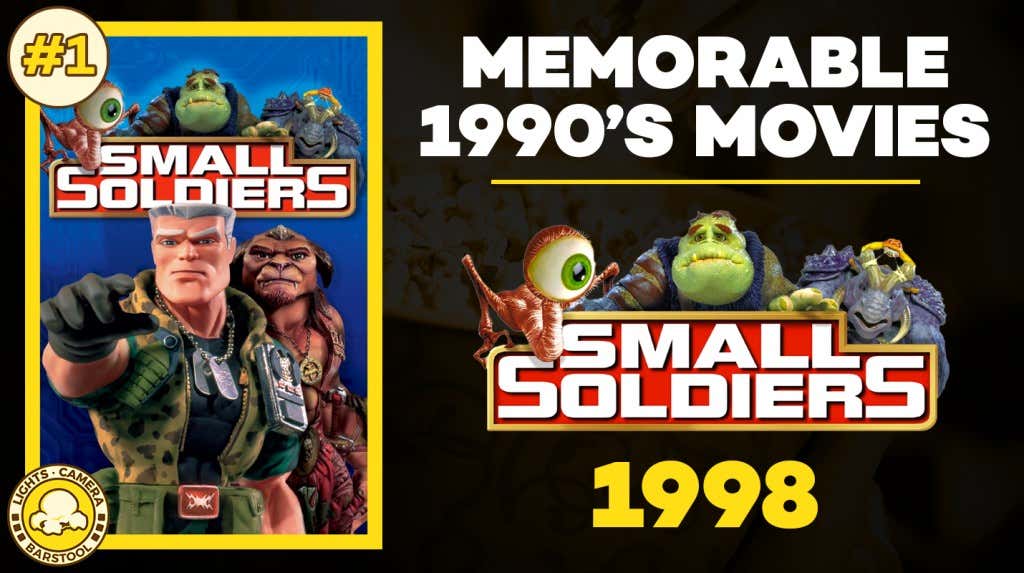 This movie was, is and always will be fucking amazing. It was basically a more badass version of ‘Toy Story’. I’m not saying it was a better movie, because it was not, but ‘Small Soldiers’ always blew me away. The toys are probably the coolest movie toys ever created. They came in the same package, they were life-size, they talked and some fired their weapons. The only thing they didn’t do was punch their way out of the package.

Talk about a stellar cast, too. Tommy Lee Jones, Phil Hartman (RIP), Bruce Dern, Sarah Michelle Gellar, Frank Langella, Kirsten Dunst, Denis Leary, David Cross, Jay Mohr and ‘VEEP’s own Kevin Dunn. I mean shit, Jim Brown was in the movie to join his ‘Dirty Dozen’ co-stars. That didn’t mean much to me as a kid, but damn does this movie hold up well.

It had plenty of 1990’s staples as well and was one of the first movies that delved into PCs and the internet. The story and message was pretty great considering it was about toys coming to life, shooting weapons and blowing shit up. I decimated this VHS tape with countless re-watches. This movie also had a video game (which I sucked major ass at) that was one of my first CD-ROMs alongside Backyard Baseball, so that right there is enough to launch this movie to the top of my list. If for some reason you haven’t seen this movie, go watch it ASAP. 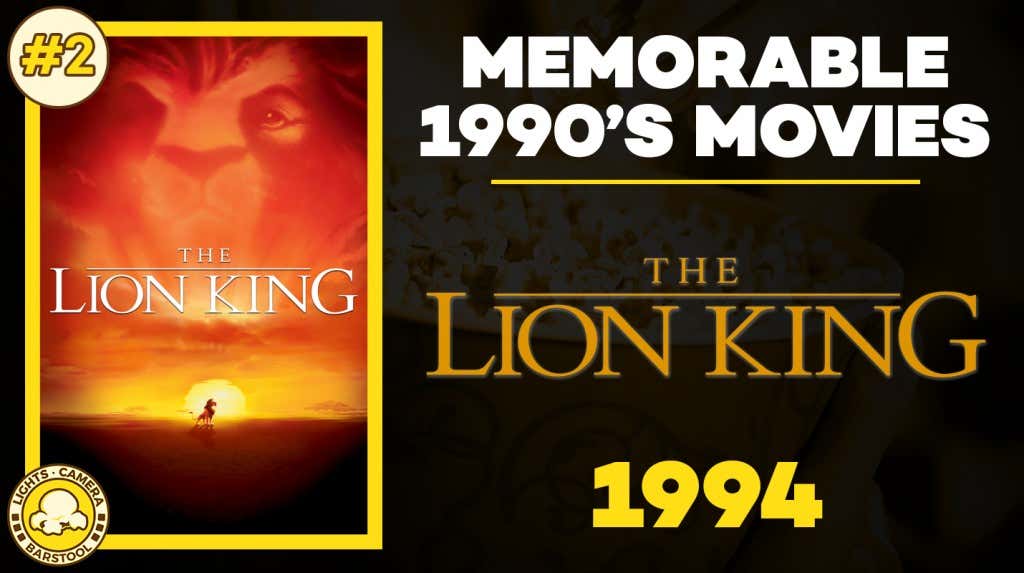 ‘The Lion King’ was the first movie I remember seeing in the movie theater. I was only 3-years-old, but the memory is faint enough where I feel confident saying that without sounding like an idiot. Once again I’ll bring up the toys, which were staples in my childhood, but also the music played a huge part in my early years as a human. From the theatrical versions to the incredible Elton John versions, the music still gets me going to this day.

I imagine this will be on almost everyone’s list and might be the most picked movie by anyone born around its release. Humble brag alert: I saw test footage for next year’s live-action-animated ‘Lion King’ movie and it is incredible. The movie is wholly unnecessary, but it will blow people’s minds. Apparently the song ‘Be Prepared’ isn’t in the new movie though? That’s a travesty. 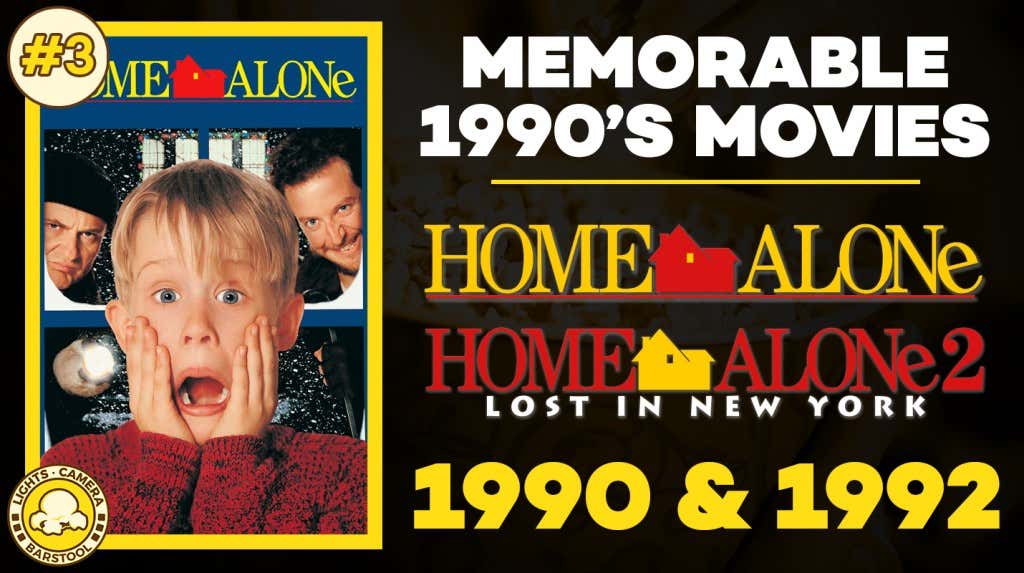 I wasn’t born when the first of these movies was released, but both VHS tapes, like ‘Small Soldiers’, were worn out within the first few months of having them. I have probably watched the ‘Home Alone’ movies more than any movie ever made with maybe the exception of ‘Ocean’s Eleven’. The idea of a kid beating the shit out of bad guys was just about as cool as the idea of toys coming to life. I don’t buy into the “Uncle Frank was the villain” bullshit, but the one-two punch of him and Buzz is one of the more underrated antagonist duos in movie history. 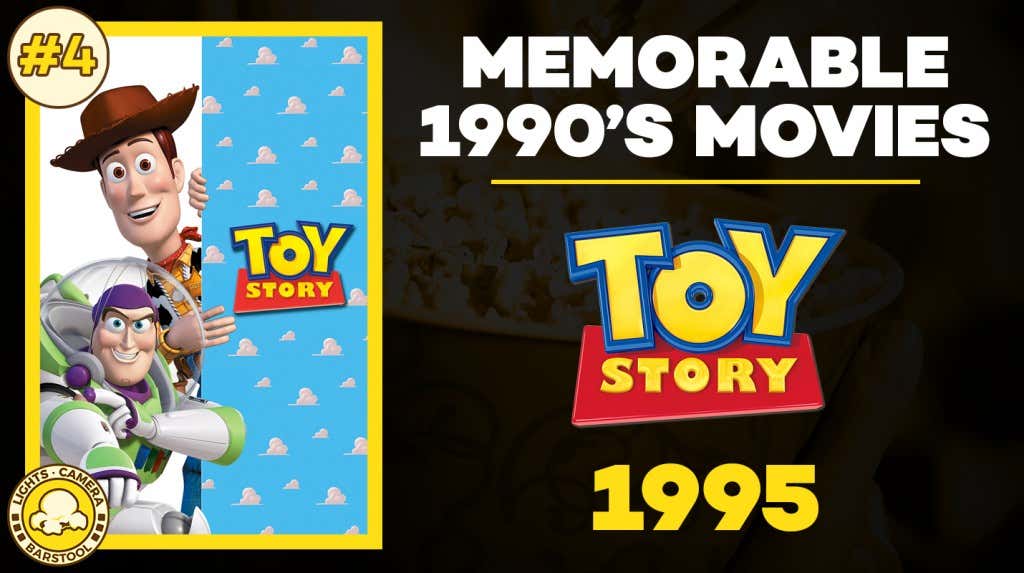 Okay, this is going to sound pretty lame, but is there a movie that advanced your imagination more as a kid than ‘Toy Story’? I know I am not the only person who dreamed of their toys coming alive as a kid. The concept was perfectly executed and definitely inspired ‘Small Soldiers’ years later. Burger King also released puppets from the movie and the commercial is right up there with the Campbell’s Soup melting snowman kid commercial for most memorable of my childhood (the night we got these toys, my family got really bad carbon monoxide poisoning. Luckily we had a detector, what an awful memory.) I still can’t believe they made a great sequel four years later and then another one 15 years later. I’m not too sure about ‘Toy Story 4’, but I’ll give Pixar the benefit of the doubt. 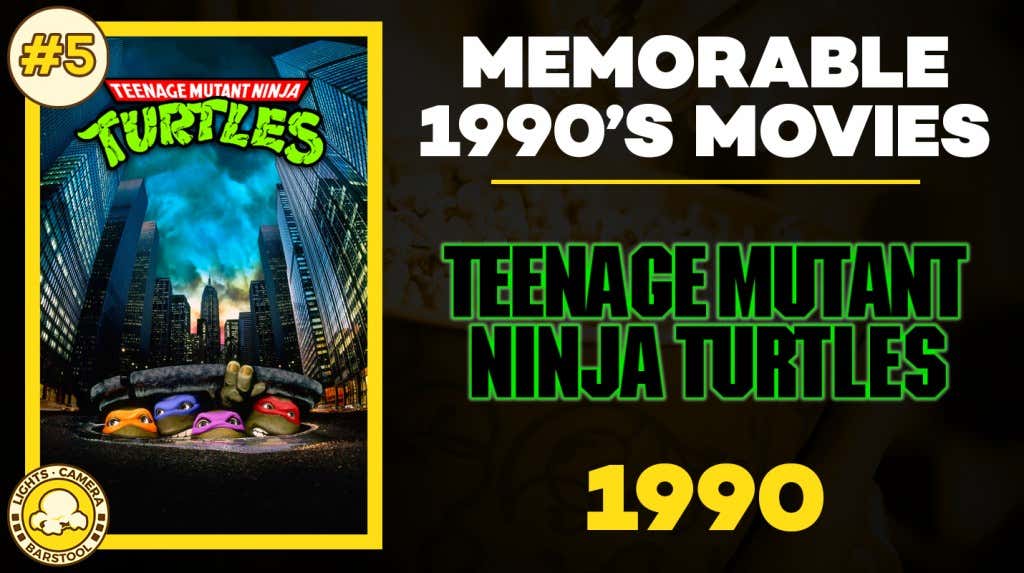 This is another movie I wasn’t born for when it was released, but I think this is as 90’s as a movie can get. This may go head-to-head with ‘The Lion King’ for the movie most mentioned among everyone replying to this. What a cool movie to watch as a child. The turtles said the word “damn,” which was a cool swear word back then. I still say these were the best looking live-action Ninja Turtles, as well. It sort of sucked that they didn’t have Bebop and Rocksteady and that Michael Bay was the first one to use them, but the movie still delivered. Side note: fuck ‘Turtles in Time’, what a piece of shit movie.

—
Okay, so this is my list of five movies, with ‘Small Soldiers’ as my first pick. Once again, let us know your pick on Twitter @LightsCameraPod, in the comments or on our Reddit.

We are reviewing ‘Deadpool 2’ in depth on Thursday’s podcast and ranking the shittiest superhero movies of all time, which you can vote for now. I’ll be releasing a combined review of ‘Tully’, ‘Life of the Party’, ‘Fahrenheit 451’ and ‘Dark Crimes’ (0% on Rotten Tomatoes) tomorrow. The review of ‘Solo: A Star Wars Story’, which is sure to be a disaster, will drop on Friday.