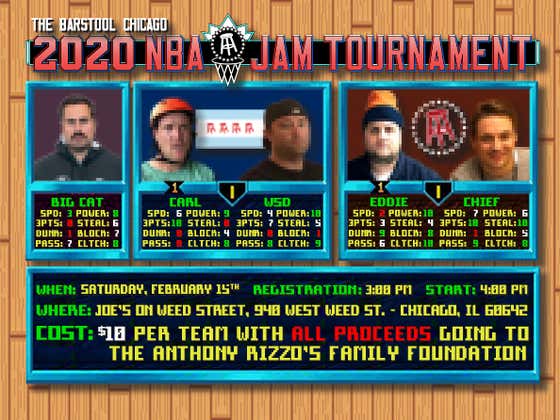 Celebrate the 2020 NBA All-Star Weekend with Big Cat and the Barstool Chicago crew on Saturday, February 15th at Joe’s On Weed for their first annual NBA Jam Tournament. This 64-team tourney will consist of 2-player teams (128 contestants total) battling on Sega Genesis for the right to be crowned Champions.

But because it’s Sega Genesis, there’s only two controllers. That means you and your partner will be sharing one controller, switching-off each quarter.

Format will be double-elimination, split amongst 4-regional groups. Each regional group will consist of 2 Sega Genesis consoles and host 16-teams. The winner of each region will advance to the Final Four to compete on the big screen under the bright lights of Joe’s On Weed.

Also included: Split-The-Pot presented by Big Cat, Pop-A-Shot side games, informal and frequent trips to the neighboring OTB, plenty of cold ones and possible even Speed Pitch with WhiteSoxDave depending on preliminary interest.

Registration for the event is $10 per team with all proceeds going to Anthony Rizzo’s Family Foundation. See details below to Register.

If we receive more than 64 teams during the sign up window, we will conduct a random raffle to determine the field.  Please note: your $10 reservation fee does not guarantee you a spot in the tournament.

Why: To crown one champion team while having an awesome time and raising money for a phenomenal charity.

About The Anthony Rizzo Family Foundation

Rizzo Foundation - Anthony Rizzo realized during his own battle with cancer that no matter how difficult fighting cancer was for him, it was even more difficult for his family. Anthony believes that an individual does not battle cancer alone, but that the whole family battles it together.

This is an opportunity for Barstool Chicago to give back to a Chicago athlete who has given so much, and we couldn't be happier to take advantage of it. Anthony Rizzo is one of the most genuine and sincere guys in sports, and certainly one of the most beloved in our city’s history.

But more than that, Anthony’s dedicated his life to helping families adjust to the struggles and challenges of cancer, something he experienced firsthand battling Hodgkin's Lymphoma as a low-level minor leaguer.

Since winning his battle in 2008, Anthony has become one of the most recognizable and impactful players of his generation. But if you know Anthony, it's the impact he has on families fighting cancer that drives his success. Baseball is just a means to wage that battle and help other people.

There's no smoke and mirrors when it comes to Anthony Rizzo. He's as real as they come, and he's built an amazing organization with his family that actively changes others' lives for the better. Naturally, we couldn't think of a better partner for this cause.