So last night Jared Hughes made the NOT Top 10. All 6 feet 7 inches of him gracefully sprung off the mound with cat like reflexes and tried to make a play at first...and ending up leaving a divot the size of the hole Cespedes left in the Mets lineup while flailing around like a turtle on its back:

Now luckily for Mad Dog, I was dabbling in some hut leaf and was TUI, Tweeting Under The Influence, and mistakenly said it was Michael Wacha, last night's starter. He gladly took that mix up and then rolled with the punches:

PR 101 right there on how to have a little self deprecating humor and turn a negative into a positive. Which is something that sounds so easy but not a lot of athletes do.

Just like the way he was down to come on the podcast and chop it up. 99% of athletes will tell you they cant come on the podcast or the blame the PR team or their publicist for denying them the appearance on the show…but then some guys like Jared Hughes rip an extra large coffee and say "Fuck it, I'm an adult and if I want to talk to a couple other humans, I'm going to do so" 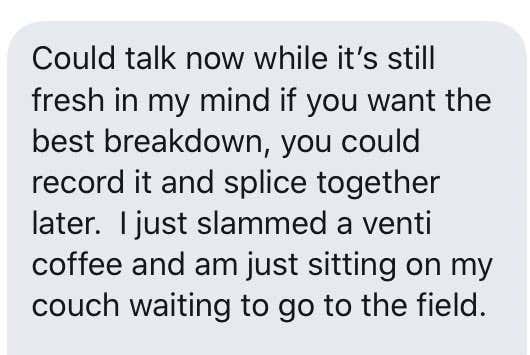 So I hereby announce that Jared Hughes is My Guy. We're always drafting Guys on Gotta Believe and I think I've got a TOP NOTCH selection with Crazy Eyes Hughes. JD Davis was the Guy in 2019, Jared is this year. After seeing the Realmuto GIF from last year when Jared was doing his patented sprint in from the bullpen:

And then after catching a glimpse of that dude's peepers in his yearbook photos:

And then see him go all out trying to make a Web Gem, failing miserably, and just laughing about it, he is THE ONE. Tune in throughout the season for more of Mad Dog…win, lose, or cuncel, he's a great dude to root for.

I've Been Fighting A Mean Push

Barstool Outdoors is Back - Chasing Bass

Walk The Line Off The Rails

Getting Creative With My Chipping

Are Grilled Cheeses As Burger Buns A Tad Excessive?