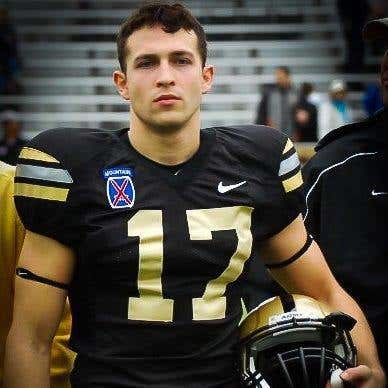 BAMBERG, Germany — He was a standout athlete who could run two miles in 11 minutes flat. He was a football star at West Point and a natural leader.

But for all his achievements, one of the things that stood out most about 1st Lt. Stephen “Chase” Prasnicki, recalled friends and commanders, was his humility and good heart. Members of the Bamberg military community gathered at the Warner Barracks Chapel on Wednesday to mourn Prasnicki, a 24-year-old soldier who was killed June 27 when his vehicle drove over a roadside bomb in Wardak province, Afghanistan. Sgt. James L. Skalberg Jr., 25, of Cullman, Ala., assigned to the 3rd Brigade Combat Team, 1st Armored Division out of Fort Bliss, Texas, also was killed.

When you search for stories of the former Army quarterback who lost his life in Afghanistan, the above is what you get. Honoring his legacy as a soldier is great and deserved but the other aspects of people’s lives can be missed.

Prasnicki story went viral again this last week even though his death happened 5 years ago. We wanted to take that as a chance to tell Chase’s story. We brought on his best friend to tell tales of dorm life, Mexico, and the football field.

We also talk about President Trump’s moment with the Marine whose hat flew off, being addicted to golf, and we finished up our chat about Band of Brothers.