We record Red Line Radio on Wednesday around 12pm typically. It's part of our weekly routine at Barstool Chicago. It's a fine set up for us, but every now and then something happens late on Wednesdays that don't make it to the show and this week's episode had that in spades.

If you already listened, thank you. If you haven't listened yet, go do that now. I am not happy with Tony La Russa and 99% of that is because of how he and he alone is handling Andrew Vaughn. If you don't know who Andrew Vaughn is, he is a Golden Spikes winner, the NCAA baseball version of the Heisman, the White Sox 3rd overall pick in the 2019 draft, and a current top 20 prospect. He was slated to open the season as the every day DH.

Then Eloy gets hurt with a handful of days left in spring training. At that point of the calendar baseball season, teams are hard pressed to make trades, even if they know they're going to stink. Markets need to be established, the hypothetically "good" teams are going to want to wait to see what their actual needs are, and those two things make team to team player movement pretty rare. Because of that, Vaughn was forced into action in LF on a whim.

A few opinions about this:

1. LF might be the easiest position in all major professional sports to play
2. Andrew Vaughn learning to play LF to me is whatever because of #1
3. Just because I think #1 is true doesn't mean that this situation doesn't suck.

That said, he's handled the position more than adequately. LF is the ONE position on a the diamond just about anyone can transition to somewhat easily. Obviously there are exceptions to that rule, but in general, that's the truth. That's why you've seen Schwarber, Adam Dunn, Manny Ramirez, etc. thrown out there in the past. If a player's stick is good enough, it will often times outweigh how mediocre/weak/poor their defense in left is. It's my opinion but I will stick by that opinion until the end of time.

Vaughn also did this yesterday:

Likes just fine to me!

So since we all expected Vaughn to play every day as a DH, why can't he play every day as a LF? Tony La Russa himself even said his defense is "above average" at the position and whether or not that's true, you don't bench your best prospect for fucking Nick Williams multiple times over the course of a week, who's not surprisingly no longer on the team. It makes ZERO sense.

It's simple. Either Vaughn should be playing every day like they assumed he would as DH, or he should be at the alt site in Schaumburg and getting ready for his season in Charlotte. Him sitting on the bench in Chicago does nobody good - not him, not the team, not anybody. Reps, reps and more reps are all he needs. If the Sox didn't think he was ready to face big league pitching, they should have gone all in on Nelson Cruz or someone. Take away the Twins best hitter by far and add him to your lineup. It's a double win.

But La Russa worked backwards over the first week and it infuriated me. In my opinion and the opinion of many in the fanbase, La Russa actively put the team in a worse position to win ballgames. I lost my SHIT on him on this podcast and I think rightfully so.

Now the Sox have had plenty of boneheaded moves and mental errors to start the year, but those are already getting cleaned up and they're showing flashes of life.

Like the flash of life we saw out of Carlos Rodon Wednesday night after we recorded:

Unreal game. Dude's a different animal. He's been a top 2-3 pitcher in baseball to start the season and is exactly what the Sox drafted 3rd overall years ago. Love his renaissance and once Abreu and Moncada click, this team is going to be scary. Just sucks that it's taking a minute for the offense to get going.

La Russa just needs to stop fucking with the lineup. Best 9. Period. That's it. It's negligence to do otherwise.

Fuck the Cleveland Indians. Bush league assholes, and I don't really care that Naylor slid into 1B to break up the perfect game. Nobody on earth wants to be on the bad end of a perfect game, so I don't hate what he did. Perez on the other hand? Get the fuck out of my face: 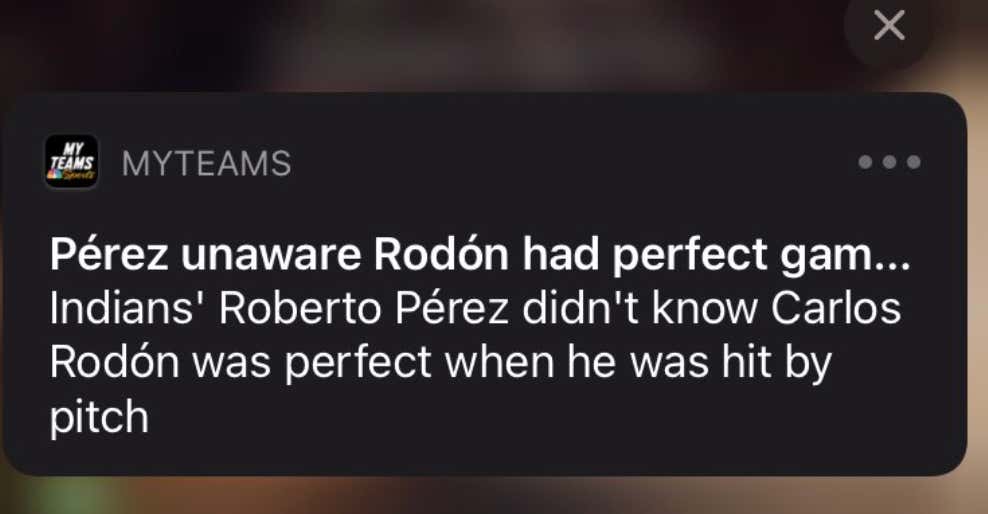 That's an app update I got… yeah, no. Fuck off. The fucking ball hit his goddamn shoelace!!! Get the fuck out of the way and swing the bat like a man. The game was 8-0, your run didn't matter. Be a competitor one time you bitch. The entire stadium, including Roberto Perez, knew what Rodon had going on Wednesday night. What a bitch.

And Andres Jimenez/Umpires can fuck themselves too:

Such fucking bullshit. The fight was stupid and nobody was tossed as no punches were thrown, but it's just stupid. The umpire should have made the right call since he was… ya know… looking right at Gimenez shoving Eaton off the bag and you just CANNOT miss that call, and I'm glad Eaton got fired up. I've called him a bitch in the past, but Eaton plays hard fucking nosed and is a good player on any team to have. I kinda hate him but he's just good at baseball. One of those guys you want on your team but HATE him if he's not. Sort of wish he would have decked Gimenez right in the nose.

Nevertheless, let's kick the Bosox fucking teeth down their throats this weekend. Jared and I will be having a bet on the App coming out later today. Let's go on a roll! Nothing but positive vibes only from here on out.