We've been on an awesome run on Red Line Radio - in spite of the quarantine - with what has been our best slew of guests ever, in my humble opinion. This week we had Steve Trachsel on the show to break down playing with Sammy and giving up McGwire's 62nd dinger in 1998, then had Jim Riggleman on immediately after to break down what it was like coaching Sammy and being a baseball guy through and through.

Awesome shit top to bottom on both interviews. Trachsel said baseball players have turned into bitches and I tend to agree:

But that's not what I want to talk about right now. The show got fucking HEATED yesterday because Sterk and Chief are fucking idiots who don't take what I say as gospel when everything surrounding this fucked up MLB/MLBPA negotiation has been force fed down by throat by those in the know. Here's a clip of how it went:

I tried explaining it as best I could in a blog a few days ago, but the TL/DR is this: the "tell us when and where" movement started by players was their was of calling the owners bluff and saying, "fuck this just schedule the season". But word got back to the owners that the players planned on immediately filing a grievance with the labor board as soon as an amended CBA was agreed to because the owners didn't abide by a key clause in March's agreement.

Well low and behold, a colleague of mine got his hands on the March agreement and sent the PDF to me. This is the clause that the players are claiming the league violated with their bullshit "proposals" aka stall tactics for the last two months: 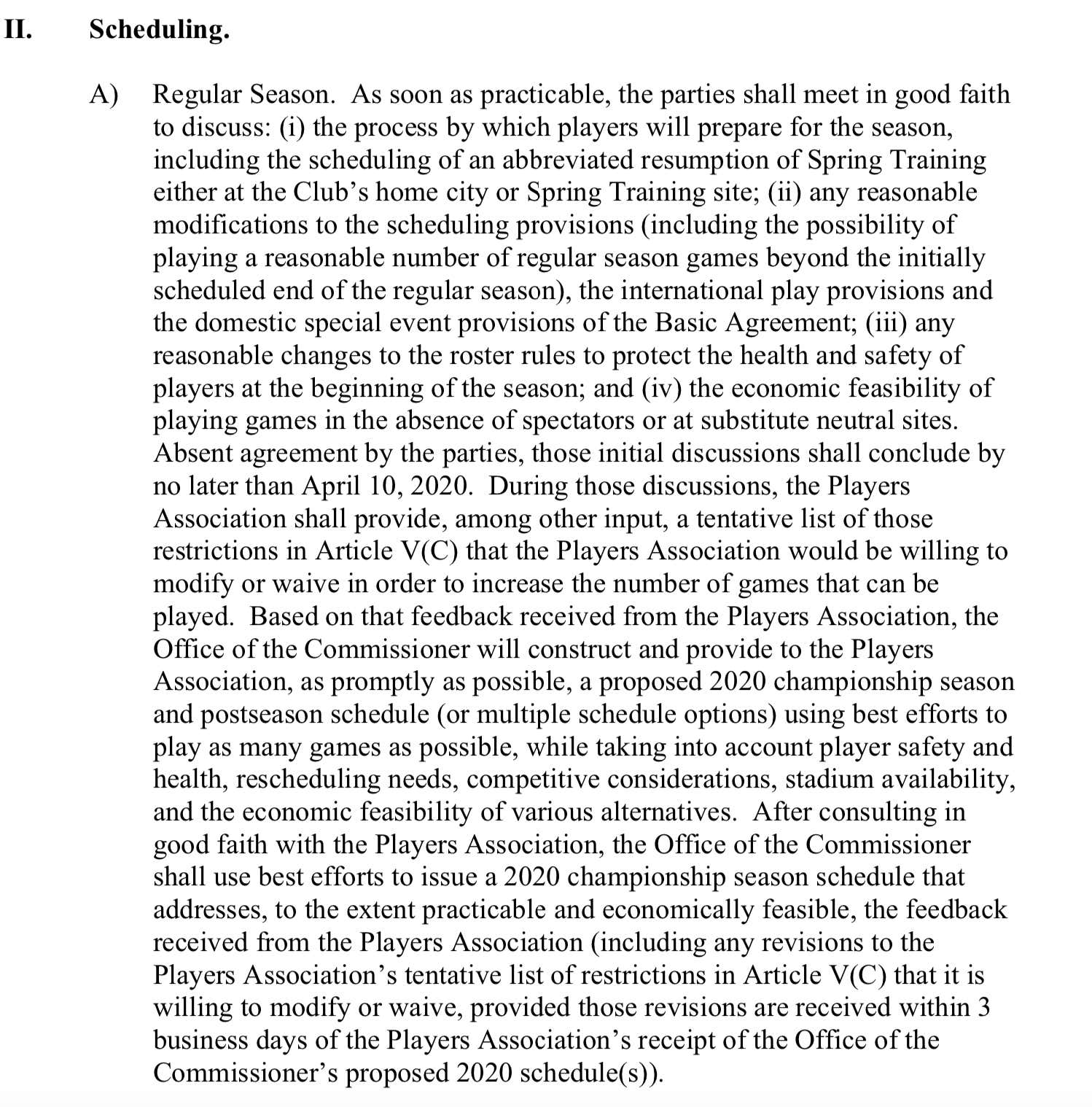 This is the most important part:

"Multiple" proposals were given to the players from owners, but they were all the EXACT same thing. If they number of games went up, the pay rate stayed the same. It was all a stall tactic for the owners to get as close to 50 games as possible, by paying as little as possible, all why using time as leverage so the season would more or less get to do or die mode, which is where we are right now.

In no way, shape or form did they provide the players with their best offers to play as many games as possible. It's clear as day, and the players should absolutely file a grievance with labor boards looking for monies owed to them that they could have earned had the owners not violated that part of March's CBA.

Now would that hold up in court? No idea, I'm not a lawyer, judge or arbiter. I'm an internet blogger. But I do think that the owner's forcing the players to sign documents saying they won't file a grievance if they take the owners' latest deal is owners admitting "fuck. They got us dead to rights and we'd owe them a lot of money".

Carl and Chief disagree. I think they're fucking clowns but who the fuck knows? What I do know is you absolutely, positively, without question need to go and listen to the full and unabridged episode of Red Line Radio

NOW WITH THAT SAID - the latest proposal won't be accepted by the players. They are 10000% close and an agreement should be reached in a matter of days, but to not immediately sign after the "when and where" movement isn't the best look IMO. Nevertheless… fuck the owners. Bunch of greedy assholes. This is a perfect encapsulation of how this entire thing has gone:

HERE ARE THE LINKS. BOMBS AWAY