It’s the Bears, of course. Of course it is. There’s a lot of shitty organizations in the NFL over the years. Lots of ineptitude, but the cream rises to the top. What other team could it be besides the one who owns this graphic 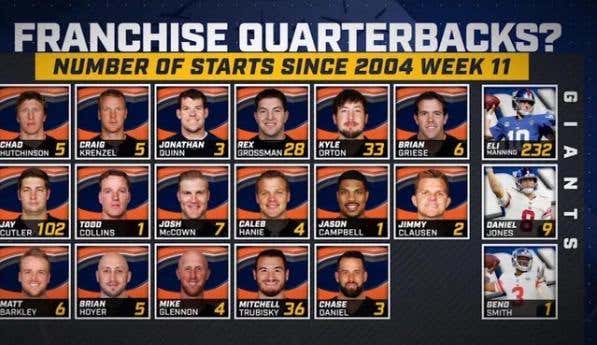 That graphic doesn’t even go back to 2000. It’s only 2004. If you back it up all the way to to 2000 you get to add Shane Matthews, Cade McNown, Jim Miller, Chris Chandler, Henry Burris, and Kordell Stewart. 973 times the Bears have failed to get a first down according to the good people at Bears Reddit. And…the same team that has more 3 and outs over the last 20 years leads the league in them again. It’s unbelievable. Things never ever change. The only thing separating the Bears from the Browns in terms of misery and futility is that the Bears are able consistently put out a defense that actually makes football somewhat tolerable. The Bears are tied for 2nd for most 3 and outs forced over the same time period. It’s an endless cycle of wasted opportunities. How many games would the Bears have won this year with even an average offense?

People still love to talk about this graphic too.

Suck my dick “in the hunt”. They’re not in the hunt. You look back at this season when it was supposed to come together and it’s all right there for them, but Mitch and Nagy couldn’t do it. The Green Bay game, the Chargers game, the Rams…all winable games. All games that definitely go the Bears way if they’re like the 20th best offense in the NFL instead of a team that leads the league in giving it right back to the other team. Such a fucking waste of a season. Again.