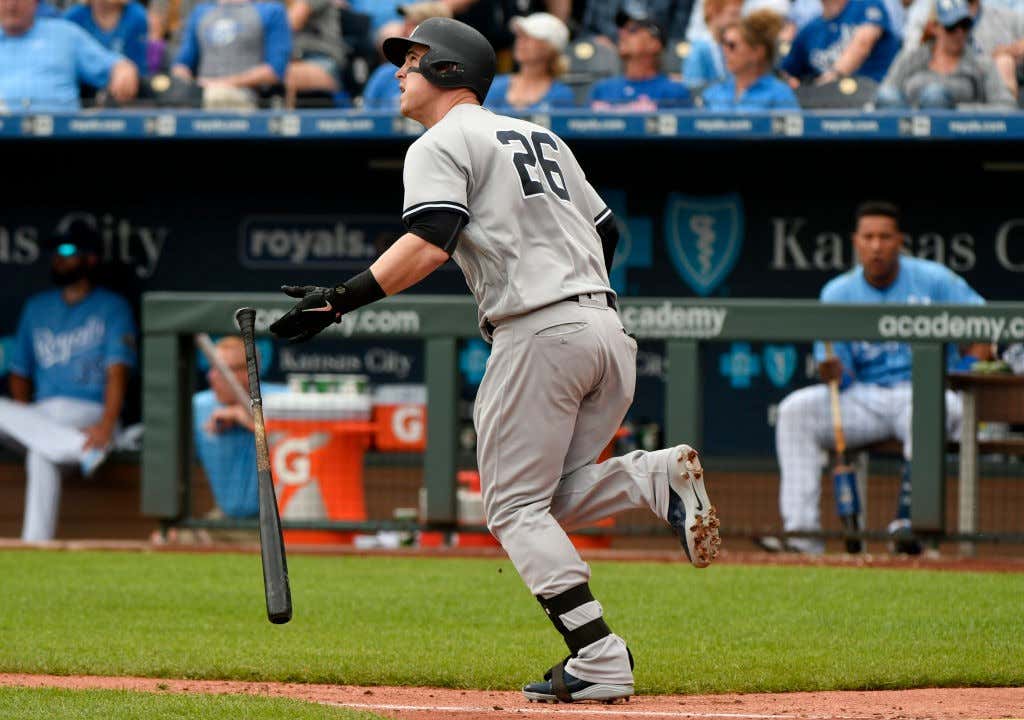 There’s nothing like a blowout Yankees win on a Sunday afternoon. The offense was firing on all cylinders today, but first I want to talk about Sonny Gray.

Sonny took the mound today trying to bounce back from his disaster start against the A’s at home last Friday. With the extended amount of days off, that gave him plenty of time to figure his shit out and correct his ongoing inconsistencies. The major issue with Sonny has been a lack of aggressiveness and of course the big inning where he usually surrenders the lead. Today he worked extremely fast, taking about 10 seconds or less in between pitches, and just simply threw the baseball. Sonny rarely shook off his battery mate Austin Romine and was in a groove from start to finish. The result? His best start as a member of the New York Yankees. Sonny went eight strong innings, surrendering just one run on four hits, walking one and striking out five. It was his deepest start since September 12th of last year. He didn’t allow a baserunner until the 5th inning and by then the Yankees had a commanding 6-0 lead. I know it came against the 4th place Royals, but keep in mind Kansas City currently ranks 6th in team batting average across all of major league baseball. This was a major step in the right direction for Sonny and all it took was for him to work fast and just throw, not think. He’ll get the Angels at home next weekend where he’ll hopefully build on this success.

The Yankees offense, to no surprise, once again beat up on a left handed pitcher. I don’t know why teams continue to think they can get these guys out with a southpaw on the bump, but I welcome them to keep trying. Today’s victim was Eric Skoglund. He faced a getaway day lineup that did not feature Gary Sanchez, Didi Gregorius, or Clint Frazier. There were a ton of people on Twitter complaining about Boone’s lineup choice today and I didn’t get it since this was a day game following a night game. Relax guys, it’s Eric Skoglund.

Before the game started it was reported that Greg Bird could return to the Yankees major league club as soon as next week. After going hitless in seven previous games, Tyler Austin collected two hits last night and another two today. Both of today’s were home runs, including this cock shot.

There’s an angle from the Kansas City feed where the fat guy on the stairs falls trying to catch this and it’s incredible. I have it on my twitter if you want to see, but I can’t post non-MLB videos on here unfortunately. Anyways, Austin felt the pressure of Bird and answered the bell. With Bird’s return imminent there will be a big decision for Cashman to make of whether to keep Walker or Austin on the team as the backup. Walker brings the switch hitting aspect as well as a versatile glove, capable of playing other positions. Austin brings lots of pop and is probably the better overall hitter. It’ll be a tough call to make for sure, but I could see experience being a heavy factor favoring Walker.

Another guy who has responded to recent criticism is center fielder Aaron Hicks. Since Clint Frazier’s recent call-up this week, Hicks has recorded 7 hits, including two more today. The biggest problem this team is currently facing is that there are too many good players with so few roster spots to be had. That would be what I call #FirstPlaceProbz. I mean even Austin Romine stepped in as the backup catcher and picked up three hits including his first homer on the year. Our backup catcher is hitting .326 on the season. There are no weak spots in this lineup.

The Yankees haven’t lost a series since mid-April. Is that good? After starting 9-9 they currently stand at 30-13. That’s just ridiculous.

We’ll be recording another episode of The Short Porch tonight as long as recent college graduate Tommy Smokes ever answers his phone again (he’s been ghosting me today). I’ve got a real mic now so you won’t have to hear me underwater on my cellphone. Subscribe and listen below.