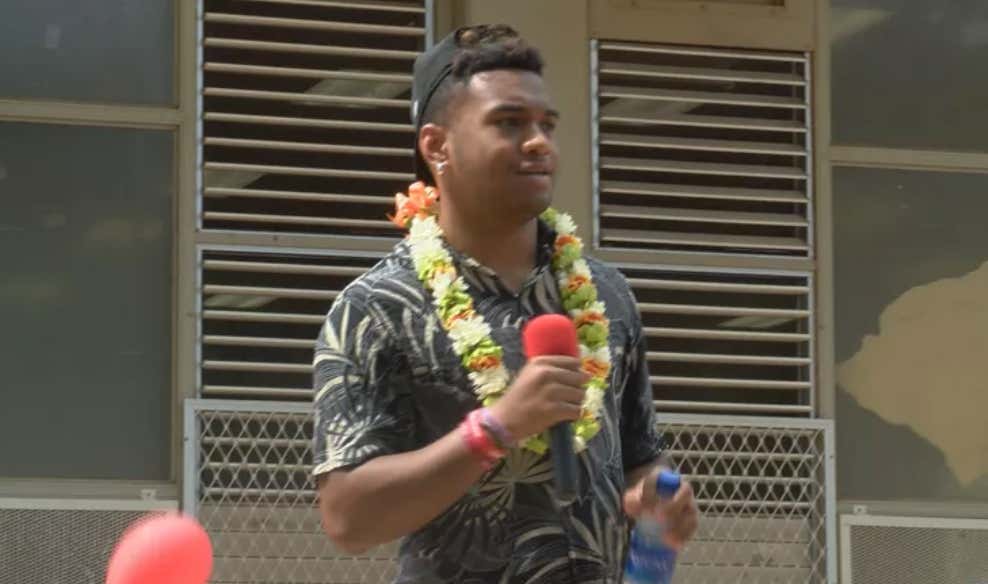 One of the biggest questions going into the 2018 season will be Alabama’s QB situation. Who will start? Will the backup transfer? How many times do I have to say Tua Tagovailoa before I don’t sound like an idiot? Interestingly enough, we were pretty close to that not being a question at all according to Tua Tagovailoa:

Saturday Down South-While speaking to a group of middle schoolers, Tagovailoa revealed his desire to leave Alabama and transfer out to USC — the school he was originally expected to sign with out of high school. This was during the regular season.

“I called my dad and asked him if my offer to the University of Southern California was still available,” Tagovailoa said according to Taryn Hatcher of Hawaii News Now. “I wanted to leave. I told my dad I wanted to go to a school where I thought it’d be easier for me and wouldn’t challenge me so much.”

“Even throughout my football season, I wasn’t the starter,” Tagovailoa added. “I wanted to leave the school. So I told myself if I didn’t play in the last game, which was the National Championship Game, I would transfer out. If I gave in, I don’t think I would have seen the end blessing of where I am now.”

Bizarre that Tua would admit such a thing. I’d suggest keeping that one under wraps, but considering the context it makes a bit more sense. Tua was at the middle school he attended back home in Hawai’i and speaking to students about lessons he’s learned so far at Alabama.

Hawaii News Now-He said his parents told him he had to push through, and he knew they were right. Still, Tagovailoa says, feelings of frustration crept in again as he accumulated more and more time on the bench for the Crimson Tide last season as their second-string QB behind Jalen Hurts.

An interesting tidbit from Tua, but not that surprising. If Jalen had led the Tide to a victory against Georgia, the likelihood of Tua getting a shot at the starting job would be small. You can’t blame the kid for wanting to play.

Tua’s desire to potentially transfer was always speculated upon. Even Lane Kiffin mentioned it:

Lane was called an idiot for suggesting such a thing!

Further proof that Lane Kiffin knows everything and you, an average joe, know NOTHING. Bow down to his throne.

Nick Saban hasn’t announced a starter for the 2018 season yet. He was planning on letting Jalen and Tua know his decision after spring practice, but Tua’s broken thumb restricted him from competing in spring ball. All indications point to Tua winning the job, but Alabama doesn’t just want to throw Hurts to the side of the road.

There have been rumblings from Jalen’s father that he will transfer if he doesn’t win the starting job:

A lot is still up in the air for Alabama and their starting QB for the upcoming season. We’ll keep you updated throughout the summer.