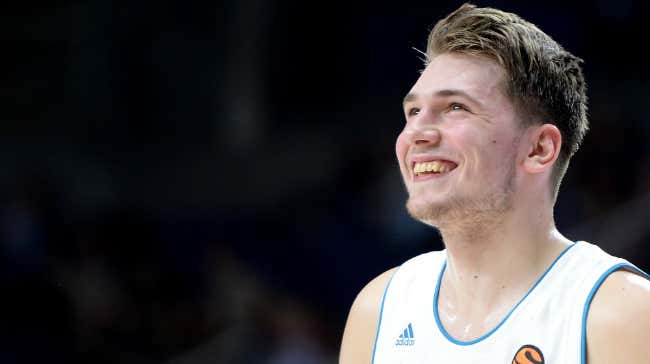 [EuroHoops] – “?’m not sure if these are the last two games [in EuroLeague]. We have yet to make this decision. Perhaps after the season.”

Okay, Luka. I believe you. I believe you’re really unsure if these are your last two games ever in EuroLeague. Completely understandable.

Yeah, this has nothing to do with the fact that Doncic and Real Madrid are currently in the Final Four of EuroLeague. Now, do I see this as a threat to the Suns or Kings? Absolutely not. Doncic has talked about coming over here for quite some time and at this point there’s no reason for Doncic to stay in EuroLeague – unless he’s scared. That certainly won’t help the ‘soft Euro’ stereotype so many European players get. Imagine him deciding to stay at Real Madrid. It would break the internet for takes.

If you’re Doncic, this is a no-brainer. Now, I know I’m in the minority where I wouldn’t take him in the top-2. That’s not a knock on Doncic, I just like a couple of other players/fits better. I think he’s a phenomenal player with a ton of talent and I have him top-5. Again, don’t read that as some sort of insult. However, why is this a no-brainer for Doncic? He’s set up at both spots. The Suns hired Igor Kokoškov, who coached him with the Slovenian national team. They already have worked together and they know how the other one operates. He can defer some of the scoring to Devin Booker and can hide a bit defensively with Josh Jackson on the wing as well. It’s a pretty nice setup for a rookie like Doncic.

Now as for the Kings. This isn’t the same old Kings. They actually made some nice moves this past offseason, the two most notable ones drafting De’Aaron Fox and getting Bogdan Bogdanovic to come over. I actually think Bogdanovic was the least talked about good rookie this year. He fit in really well and kind of slid under the radar a bit from a national landscape. Sure, people will say it’s because of Sacramento but also because of the years Mitchell/Simmons/Tatum had. But, for Doncic. He has a European there in Bogdanovic and Vlade and Peja are both in the front office. They can connect with him and help him adapt to the US and NBA.

So what do you say Luka? We’re ready to call your bluff.