That’s it. That’s the video that everyone is all up in arms about, no pun intended. Here’s what we do over here at this here Barstool Sports- if we see a funny video, it goes up, everyone has a laugh, and we move on to the next. That’s the entire system. The above video is funny. The caption is great. And that’s that.

Well, people were none too pleased about it. Would you believe it? Internet people were upset over something. I know, I couldn’t believe it either but it’s true.

But here’s the thing, Caelan is right! People who take those awful mirror selfies at the gym suck too, and we post videos and pictures of gym hardos (I believe they are often referred to as “Brads” and “Chads”) 100x more than we post videos of non-hardos. The guy in the above video is just 1 in a million. And he’s doing it right in the middle of the gym, which is just about the worst place to do literally anything besides work out.

And here’s some sweet irony for you. Caelan, not more than 5 minutes later, then mocks someone who wanted a picture in the gym. 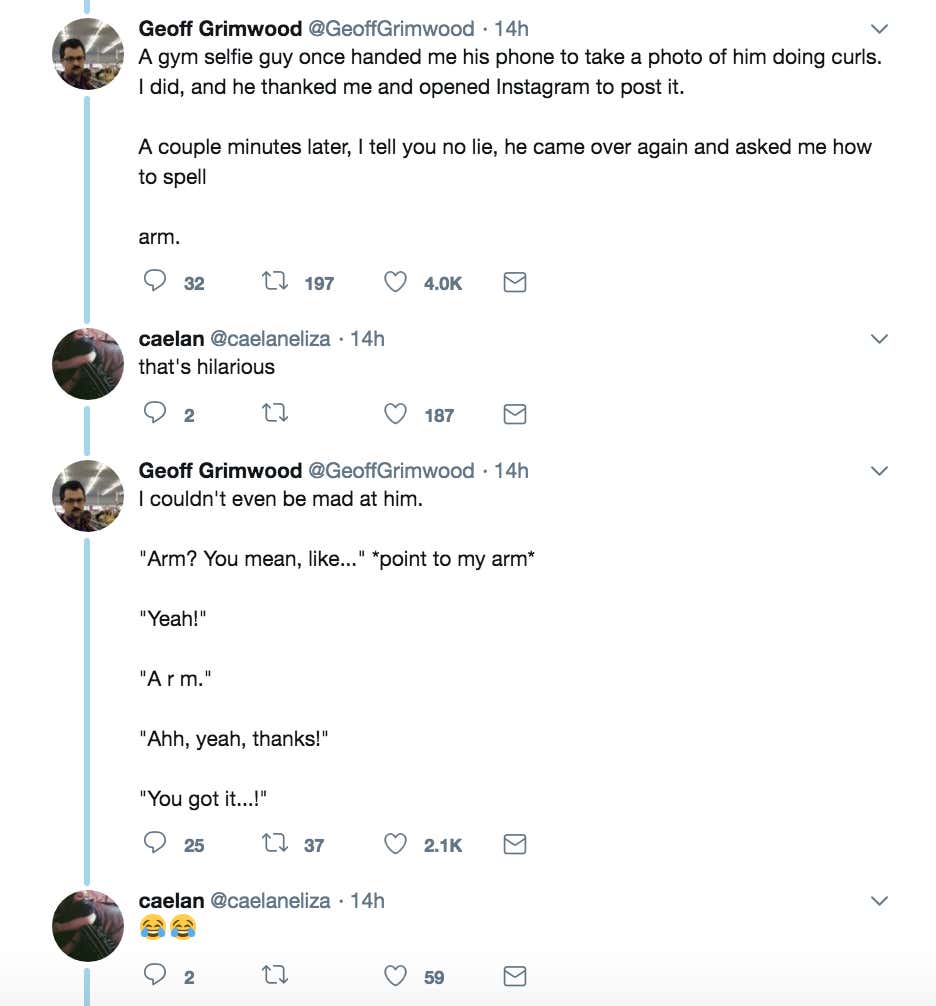 Oh so now Caelan gets to decide who it’s ok to make fun of and not? 5 minutes after going on some long spiel about the “lowest form of humour”. GET. THE. FUCK. OUT.

But anyway, this tweet is going bananas and even Rone’s boss James Corden RT’d it

Holy moly look at that engagement! So jealous.

Here’s the thing- I understand the whole “gym shaming” thing. I didn’t go to the gym for like 2 years because I have bad gym anxiety. But I went and it was fine. So the fact this guy is at the gym, flexing in the middle, knowing he looks like what he looks like, and taking selfies in the middle of the gym for all to see, I mean, come on. If he didn’t want people to see him, he would flex for selfies from the comfort of his own home. He wants people to see him. And if he’s so proud of his development, then he wouldn’t care people are looking at him.

I’m not dense enough to say I don’t see the other side of it. Nobody wants to be mocked or ridiculed or any of that. And the point of the video clearly isn’t that he’s at the gym trying to better himself, because that’s awesome. It’s the action of him flexing which is funny. Funny is funny is funny. And it’s not like the video was stolen or he was hacked or anything, he was doing that in a public place. Now, we can talk about the merits of filming someone in public and if that person is a loser too (they are 1000% a loser), but that’s a whole different can of worms that I don’t want to go down.

I guess the moral in 2018 is, anything you do in front of a room full of people is free game. Maybe it sucks, but if you think someone will embarrass you, don’t do it where a few dozen strangers are watching. And don’t do it long enough that someone will be able to take out their phone and film you.