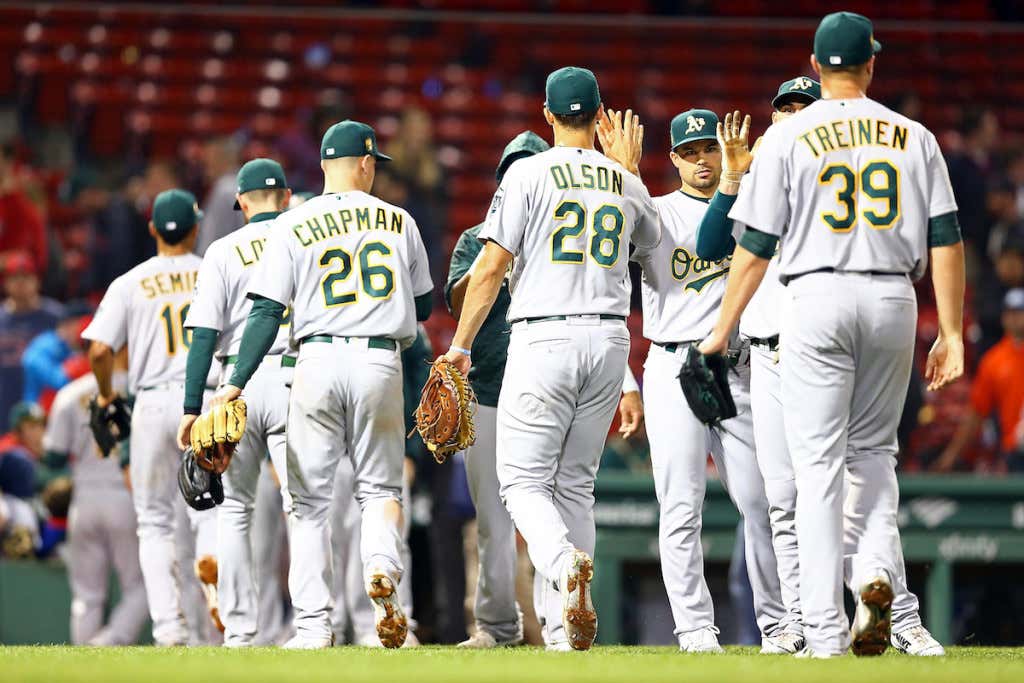 Somewhere, Dallas Braden has a stupid smile on his face. Not that the Red Sox have been playing excellent baseball since their 17-2 start — they haven’t been — but the A’s have clinched their second of two series against the Red Sox, and are the only team with a winning record against Boston this year. The Red Sox are now 1-4 against the .500 A’s in 2018, and they’re only a .500 team because they helped them get there. The A’s came to Fenway Park two games under .500, and the Red Sox have dropped the first two games of this series with the chance to get swept for the first time this season tonight.

On the surface, it looks puzzling as to why one of the best teams in the American League would struggle so mightily against a .500 team, but it’s actually a simple explanation. The Red Sox constantly run into stupid outs on the bases — I’m looking at you, Andrew Benintendi — and time after time, they fail to come up with the big hit. Just last night alone, the Red Sox were 2-for-12 with runners in scoring position, stranding nine runners on base. It’s a miracle they even scored three runs.

MLB.com doesn’t have the video of the Benintendi play, and they don’t allow us to post their content because they hate free promotion, but it was quite baffling to watch. After trailing 2-0 without even getting a turn at the dish, Xander Bogaerts came to the plate with runners at first and second with two outs. He hit a chopper down the third baseline that A’s third baseman Matt Chapman came in on and fielded cleanly, while Benintendi, for some fucking bizarre reason, rounded third base with the play directly in front of him, got caught in a rundown and was tagged out to end the inning. 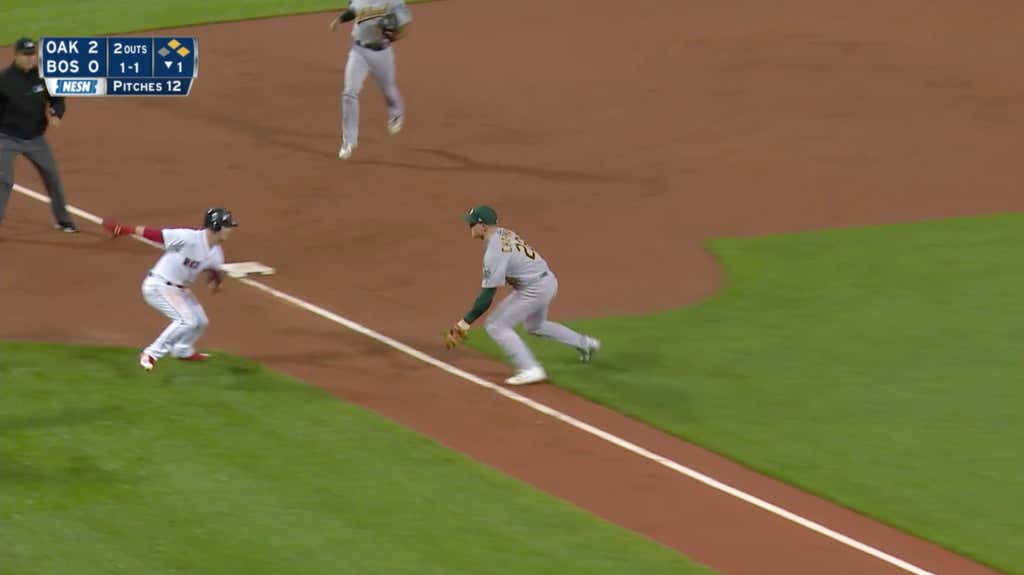 It would’ve been bases loaded for Mitch Moreland, who doubled to lead off the bottom of the second, his first of two doubles on the night. The Red Sox, once again, are leading the majors in outs recorded on the bases. I guess we owe John Farrell an apology for that one, and not that that now places blame on Alex Cora, either. It’s just that it seems like this particular group of guys, Benintendi being the main culprit, can’t seem to avoid recording outs on the bases. It would be nice to see some player accountability in that regard.

And before you say anything, no, I don’t chalk it up to “being aggressive”. There’s a way to be aggressive without being stupid. Last night, Benintendi was stupid. In fairness, he did go 3-for-5 with a home run and a double, but it’s like a puppy that pisses on the rug. I still have to be mad at you so that you learn your lesson.

Eduardo Rodriguez was looking to build off of his strong start against the Yankees his last time out, and while he was okay, he didn’t exactly take the next step. He gave up that emotional home run to Stephen Piscotty, which was in his first at-bat since returning from the bereavement list after his mother passed away from ALS. He didn’t walk anybody, which I was glad to see. The four strikeouts were certainly a step back from the 10 he had against the Rangers and the eight he had against the Yankees. But the 68 strikes that he threw were a season high.

Steven Wright made his season debut after being both injured and suspended for domestic violence. He gave up two earned runs in two and a third innings and walked three guys. I’m totally fine if I never see this dude pitch for the Red Sox again. That’s not an overreaction to his outing on Tuesday; I just hate knuckleball pitchers, especially Wright. The fuckin’ weather conditions have to be perfect and the humidity has to be just right, and gimme a fuckin’ break, man. With the Carson Smith fiasco, he’s a warm body in the meantime, but there’s gotta be a better option elsewhere.

The A’s might be the biggest thorn in Boston’s side, but like I said earlier, it’s not like they’ve been beating everyone else outside of Oakland. Since being no-hit by Sean Manaea in Oakland on April 21, the Red Sox are 11-12. They have been the very definition of meh. They haven’t been bad, but they haven’t been good. They’ve very much been playing uninspiring baseball without any consistency in their performance one way or another. You’ve had base running mistakes, defensive mistakes, mental errors, a .697 OPS with runners in scoring position over the 11-12 span, starting pitching failures, bullpen meltdowns, you name it.

As enjoyable as they were to watch when they were 17-2, we all knew they weren’t that good. They’re not an 11-12 team, either. It’d be nice to see a decent-sized stretch where we get to watch the real Red Sox, because it’s May 16, and I don’t think we’ve seen them yet.

On Wednesday night, it’s Chris Sale versus Trevor Cahill. Sale is coming off one of the best starts of his career where he struck out 15 batters, tying a career high, over nine innings, despite not getting a win. If you recall, Sale opposed Manaea on the night that he no-hit Boston. The lefty threw seven innings, gave up three earned runs and struck out ten.

Cahill has spent some time on the disabled list this year with a right elbow impingement, so he’s only made four starts, but he’s looked pretty good in them. His last time out, he blanked the Orioles over six innings and struck out twelve. If the O’s aren’t a good enough barometer for you, his start before that, he held the Astros to three earned runs over six innings, punching out five.