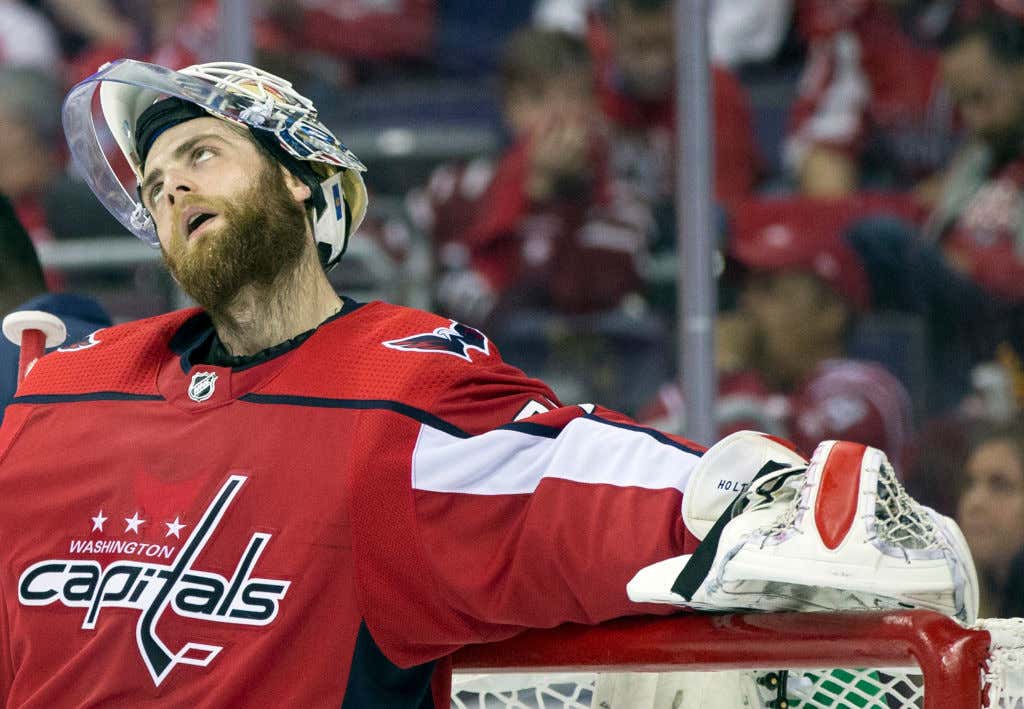 There are plenty of shitty jobs that people are forced to work. There’s probably a pretty good chance that some of you are working one right now. But no matter what, at least you’re not one of these 4 goaltenders left in the conference finals. Hell, I bet there are homeless crackheads who are thanking whatever greater power they believe in that they’re smoking cocaine under a bridge right now instead of trading places with one of these goalies. You think your boss riding your ass is bad and that Karen from accounting makes you want to put a bullet in your brain? Well take a look at the shit that Braden Holtby had to deal with last night.

On the first powerplay of the night, it was a classic grade-A Stammer Snipe.

El. Oh. El. How the hell is anybody in the world supposed to stop this?

Do you people realize how nasty that shot is? A far side snipe from between the faceoff dot and the boards. He has to get that shot below Niskanen’s block but still thread it past Holtby’s left shoulder. There was only one direct line for that puck to get into the net and Stamkos hammered the shit out of it.

And then on the next Tampa Bay powerplay of the night? Holtby gets his tits sniped off on the opposite side by this bullet from Nikita Kucherov.

Again, it is a perfect shot off a one-timer on the powerplay. Kucherov had one spot where he could go with this puck. And not only did he snipe shortside top bunk, but that shit was moving at 100mph even in the slow-mo replay. Obviously as an avid Caps hater I would love to sit here and shit on Braden Holtby for getting picked apart piece by piece last night. But there was quite literally nothing he could have done on either of those. But fortunately for Holtby, he’s not the only one. Hell, just take a look at the other end of the ice in this series.

You think Andrei Vasilevskiy isn’t hating every single moment of his life having the job to try to stop Alexander Ovechkin from launching rockets into the back of the net? Just look at this goal from game 1.

7 seconds left on the clock. Vasilevskiy is probably thinking to himself all he needs to do is just see a shot here to be able to head into the intermission only down one. Then the puck ends up on Ovi’s stick for .00001 seconds and it’s the last he ever saw of that puck. That thing was in the back of the net before he could even drop down into his butterfly. It is absolutely sickening.

So in this series alone you have Steven Stamkos, Nikita Kucherov and Alex Ovechkin. Let’s head over to the Western Conference real quick to see how the goalies are holding up over there, shall we?

Oh what’s that? Marc-Andre Fleury’s job description is to at least try to see the puck any time Patrik Laine is able to get a shot off? Yeah good luck with that one, pal. Between Laine, Ovechkin and Stamkos I’d say that the 2018 Stanley Cup Conference Finals feature 3 of the best 3 snipers in the world. Which means that Braden Holtby, Andrei Vasilevskiy and Marc-Andre Fleury are all fucked. And it’s not like Hellebuyck has it made either. I don’t necessarily think there’s one person on the Golden Knight’s roster who jumps out as being a goalie murderer. At least not in the sense that those other 3 guys are. But Wild Bill Karlsson and Jonathan Marchessault are sneaky bastards. They might not snipe your face off like the other 3 but they’ll come up from behind you and slit your throat. Which is almost worse.

So yeah. You might be stuck at some office job right now where you hate everybody there and you hate yourself the most. But at least you’re not Holtby, Vasilevskiy, Fleury or Hellebuyck. People in North Korea have better working conditions than those sorry bastards right now.