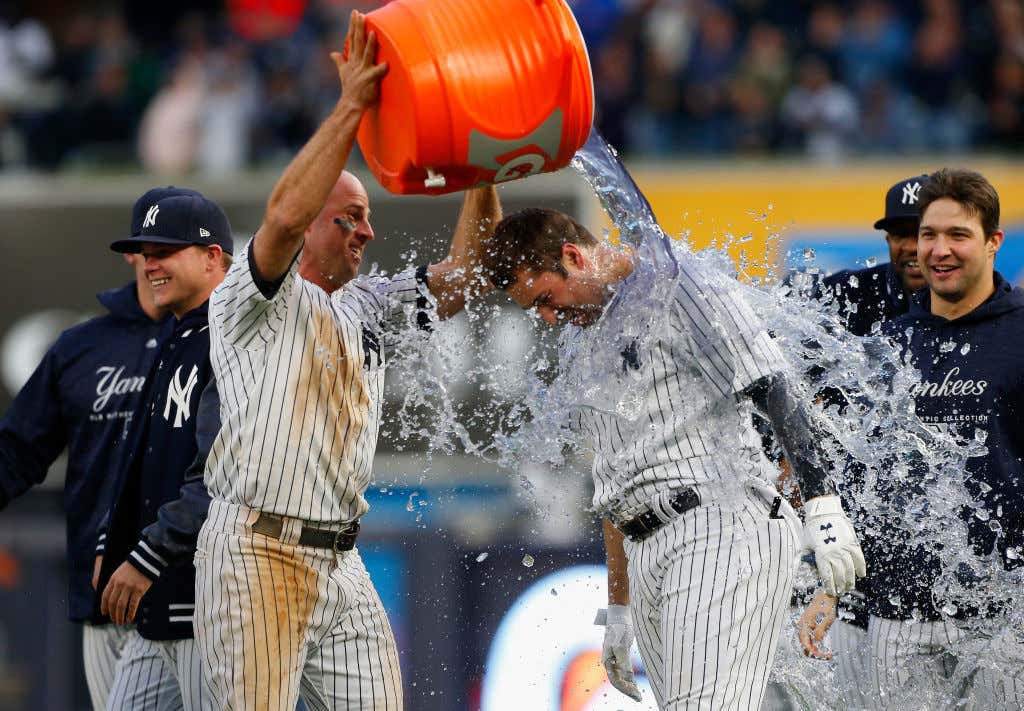 You’ve got to give the Oakland A’s credit, they’re a feisty bunch. Sure they don’t have the starting pitching or relievers that can win you too many baseball games, but that lineup can score when they’re clicking, whether it’s Khris Davis, Jed Lowrie, Matt Chapman, or Trevor Semien those guys can hit. Domingo German got the ball for the Bronx Bombers today and wasn’t as sharp as he was last Sunday. Domingo gave up all six runs the A’s scored in five innings, walking three in 75 pitches. His big mistake of the day was leaving a 2-2 changeup over the middle for Khris Davis, who hit a homer in the Bronx for the second day in a row.

I propose a plan where we stop throwing Khrush Davis pitches over the heart of the plate. I know it sounds crazy, but I think it’s the right move.

The Yankees offense struck early with back to back homers from Gary Sanchez and Aaron Hicks. The first time two Yankees have gone back-to-back and belly-to-belly all season.

Obviously, thanks to Davis, those were not enough to win this one. The Yankees would need a big rally once again and today’s magic inning came in the 5th. Aaron Judge launched a homer for the second game in a row and cut the Oakland lead in half. Neil Walker and Miguel Andujar delivered huge two-out RBI singles to tie the game as we headed to the 6th at 6 apiece.

The Yankees bullpen took over from here and did a fantastic job, shutting out the A’s for the rest of the game. Jonathan Holder was the first arm to enter the game and tossed another scoreless frame. I’m really not used to Holder coming in and looking impressive and it feels weird to even type this sentence. It’s been an odd week. Chad Green struck out the side in the 7th in what was a nice bounce back outing from Wednesday’s brutal outing against the Sox. Dellin pitched the 8th and retired Oakland 1-2-3. Boone decided to not use Betances for a second inning which brought a giant sigh of relief for everyone watching.

The top of the 9th inning generated a high level of anxiety for every Yankee fan invested. Aroldis Chapman came in to try and keep the game tied, but clearly was not 100%. You could see immediately his fastball was sitting at just 96 mph and he had zero control of his slider. After walking the first two batters of the inning, Rothschild and the trainer came out to check on him. It appeared like he had a blister of some sort or a nail problem that was affecting his stuff. To my surprise they left him in the game. A wild pitch advanced both runners to 2nd and 3rd and a walk soon followed to Chad Pinder, loading the bases with nobody out. Boone stuck with Chapman and the big lefty got Canha to strike out swinging as he appeared to regain his control a little. Jonathon Lucroy followed and thus came the most important play of the entire ball game.

Lucroy lifted a fly ball to shallow left that was deep enough for Matt Olson to try and score on and take the lead. Gardner came up throwing and delivered a one hopper to Gary Sanchez who came up to receive it and reached as far as he could to try and make the tag.

Olson was initially called safe and off the naked eye I thought Gary didn’t come close to tagging him, but a slow-mo replay showed Gary just barely grazed Olson’s jersey to complete the double play and preserve the tie. Finally instant replay was good for something!

A.J. Cole made his second appearance in pinstripes in the 10th and 11th innings and worked around trouble to hold the A’s at bay. Of his six outs, four came via the strike out as the former top prospect earned some respect in the clubhouse.

As the bottom of the 11th rolled around the Yankees put two men and two out thanks to Gary Sanchez and Aaron Hicks walks. Up came Neil Walker who has seemingly delivered in the late innings of games every time he’s come up recently. Walker jumped on the first pitch he saw and dropped in a looping single into left field as Gary Sanchez raced around third to score the winning run. Neil Walker…one could say…earned his pinstripes on that hit.

Phew! I did not need to lose the first two games to Oakland to start my weekend. As I’ve reiterated during this hot stretch, it seems like a different Yankee is coming through during every win. Today it was Neil Walker who became the 8th different player to produce a game-winning it over the Yankees last 9 wins (h/t Katie Sharp). Didi Gregorius also ended his brutal 30 at bat hitless streak when he lined a base hit into left. He jokingly asked for the ball because it had been so long since he’d gotten a knock. It would be nice to get our 3 hitter going again like he was in April.

Tomorrow Luis Severino takes the hill against the struggling Brett Anderson. This is the final game before the Yanks hit the road for 8 straight, let’s win the series why don’t we?