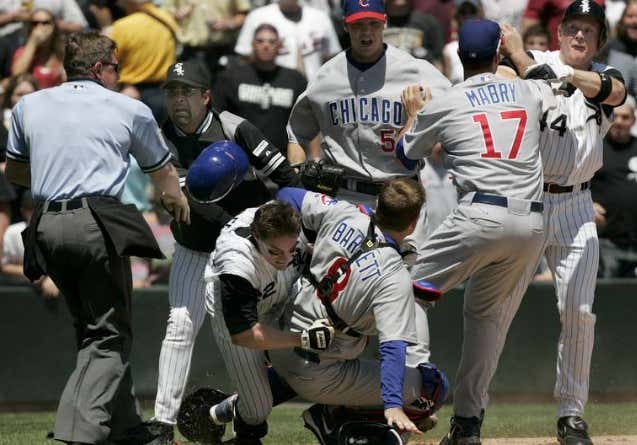 Going to start this blog with a little bit of self deprecating jabs at the White Sox.

Yes, I know the White Sox suck.  Badly.  In fact, they are one of the very worst teams in baseball.  Here are a few notes on just how bad they are:

– If the season were to end today, the White Sox would have the 3rd overall pick in the 2019 MLB Draft

– and if you’re an advanced stats guy, 23rd lowest fWAR for hitters, 27th worst fWAR for pitchers, and -2.0 and 26th worst def per Fangraphs, whatever the fuck that means as a fielding stat

With that said, this season has gone just as planned so far. It was never about wins and losses this year, though if you were to ask a lot of Sox fans, they’d prefer the losses to pile sky high, which they’ve done.  BUT – and this is a big but – the prospects are flourishing, they have 2 top 4-5 picks in a row coming up, they’ll be out of the international penalty next year and will have a gazillion dollars to spend.  THAT’S ALL THAT FUCKING MATTERS FOLKS!

Anyways, you can’t count me in as one of the fans who wants losses for the sake of getting the highest pick.  No, I don’t give a shit when they lose as I know this is all by design, but I’m not actively rooting for wins either.  What I’m rooting for is Moncada, Kopech, Dunning, Eloy, Rutherford, Basabe, Micker, Sheets, Lopez, Giolito and about 12 other guys with big league potential to keep improving either in The Show or en route to it while also rooting for Hansen, Robert and Burger to get healthy quickly as possible.  Wins and losses can suck my fat one right now

For this series and this series only, I want blood.  I want bean balls and dirty slides and mound charges and mangers going nose to nose.  Not only from the White Sox, but from the Cubs too.  I want drama on drama on drama.  I fucking hate the cubs more than anyone hates anything.  Fuck that organization head to toe.  Sure, I love the vast majority of their lineup, Q’s my guy, and I love that Theo has an insatiable appetite for victory.  But…. fuck them.  Fuck’m.  I can’t even sugarcoat it, just seriously fuck the Cubs.  I want a goddamn sweep.

My White Sox fan midget syndrome was out in full force right there.  I’ve admitted it 100x over, Sox fans do in fact have little brother syndrome when speaking of the team on the North Side.  That’s okay.  Our time will come when sooner than later, and when it does and both teams are theoretically competing for World Series’ titles every year, Chicago will burn to the ground.  Can’t wait for it.

For this blog, I was going to get into a preview, but that’s a fool’s errand.  The Cubs are much, much better on paper and off it than the White Sox.  Anything less than a series victory for the Cubs should be considered a massive failure.  With that said, I’ve fully talked myself into a Sox series victory, and because I possess a login on Barstool Sports [dot] com, I’ll be a good dude and share my brain and rationale with the people.  I like to wet the beak as much as the next guy, so let’s instead look at some gambling bylines for this weekend and get rich: 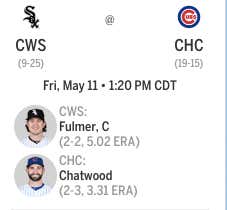 On paper you’ll see two pitchers who have had a lot of trouble harnessing their fastball command to date in 2018.  Don’t worry about their ERAs, worry about their walk rates.  Tyler Chatwood averages about 7.5 BB/9IP.  Horrendous, and Carson Fulmer is a not all that much better 4.7.  Sox hitters walk about 7% of their at bats, good for 29th in the league, while the Cubs walk 8% of the time on the dot, good for 23rd.  It’s basically the very moveable force meeting the totally stoppable object in this series.  Now, Chatwood has great pure “shit” and historically has averaged a decent-ish 4.3BB/9IP, so I’m kinda expecting him to find his groove starting today against about 6 replacement level White Sox hitters.  As I write this on Thursday night, the O/U hasn’t been set, but I’m assuming it’ll be around 8.5-9.  The public is going to be all over the over IMO and Vegas doesn’t lose to the 75% or more of the public.  I’m expecting a 6 hour long 3-2 game with about 400 runners stranded by both teams.

The bet?  The UNDER.  DON’T WORRY ABOUT WHAT IT IS, JUST BET IT

I will also sprinkle in White Sox ML just for shits, but this is the one true toss up game in this series

Whatever the over/under is in this game, I don’t care.  Won’t touch it.  It’ll prolly be 8ish, but I’d advise against acting on it in either direction.  That said, the Cubs will be -1.5 and -180ish I’d assume.  This is free money, just hear me out.  This might be the last big game that Big Game James ever pitches in, and he’s going to be up for it.  Call me crazy but I think Big Game James pitches a complete game shut out and the Sox win by 8.  Maybe more.  He’ll basically be Kevin Costner in that one really shitty movie where he threw the perfect game as a 50 year old.  Not only that, but Lester will helplessly piss and shit himself in fear when he sees Adam Engel on base 4+ times in the first few innings alone.  Many of you might not know this, but Engel is one of the fastest players in all of baseball and Jon Lester has the yips.  Poor Jonny will have PTSD and be admitted to a psyche ward shortly after Engel and crew get through with him today.

This is my favorite matchup of the series, because one pitcher is a robot and the other is more emotional than a pregnant chick.   I sincerely hope Giolito studies Hendricks by watching how he attacks each and every hitter, how he is completely stoic on the mound, how he interacts with umpires, how he sets hitters up, how he holds runners on base, etc….. and uses it all as a learning experience on what NOT to do as a professional pitcher.  I mean, Kyle Hendricks throws what, 87 MPH tops?!?  Fuck outta with that.  Pussy.  As the great Kenny Powers said, “Naw man, just gimme a fuckin’ fastball”.  Chicks don’t dig 87 MPH running fastballs painting outside corners, they dig 92MPH straight fastballs that occasionally get by hitters once every 3-4 innings.  Hendricks will leave this ball game realizing that it’s not about command, instead about how hard one can throw, all while not paying attention to mechanics or body function whatsoever – and he’ll be a better pitcher down the line because of it.

On top of that, Giolito will attack hitters with reckless abandon, just like he did on the pressure packed stage of Sloan Park against the Cubs this previous spring training.  I was at that game and he fucking shoved.  If Giolito doesn’t have any “rookie moments”, which I don’t see him having, I fully expect Bryant and Rizzo to be bunking with Lester on Shutter Island after the game’s conclusion.  Cuncel da Cubbeis

The Crosstown Cup will return to it’s rightful place on the South Side, and it will stay there for the next decade straight.  If you have any qualms with anything I’ve said in this blog, feel free to @ me on twitter so I can weaponize #SoxMafia twitter on you.  Thanks