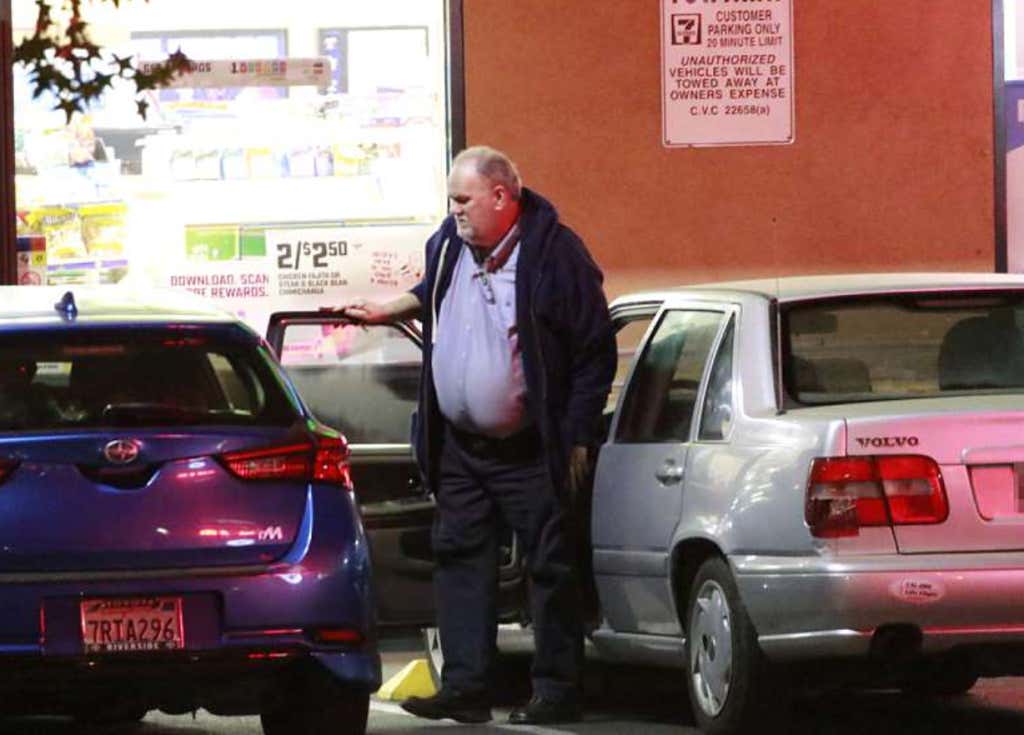 Meghan Markle’s reclusive father Thomas has begun his journey to London for the royal wedding, DailyMail.com can reveal. The 73-year-old left his secluded home in Rosarito, Mexico, late Wednesday evening and stopped briefly at a convenience store close to his house before setting off for the border at San Ysidro. After crossing, he checked into a budget $70-a-night motel in San Diego, California, – briefly popping out to stock up at a nearby 7-Eleven before settling in for the night.

Among supplies Markle was seen picking up was Gas-X which gives fast relief for gas and bloating and a can of Heineken. The former lighting director, who was bundled up in a navy hoodie and a blue cotton shirt for the trip, appeared to have had a haircut in preparation for the Windsor Castle nuptials on May 19.

Last week, Kensington Palace announced that Markle Sr would be walking Meghan, 36, down the aisle when she marries Prince Harry – ending months of speculation over whether he will attend. His ex-wife Doria Ragland, 61, will also be at St. George’s Chapel for the nuptials and will travel to the picturesque 14th Century church in a car with her daughter on the day.

The Royal Family is ridiculous. People ooo and ahh over them like they actually have power. Their lives make zero sense and being born into that family is the equivalent to winning the lottery. I don’t even know what they do all day besides take pictures and shake hands with people. They never pay for anything and have zero concept of what a normal lifestyle is. They don’t even know what it’s like to open their own can of soda and pour themselves a drink. I have no time for the Royal Family and the Prince of Kent and the Arch Duke and this and that. They’re just made up people living a made up life in my mind.

In comes Thomas Markle, who is Prince Harry’s soon to be father-in-law. Thomas does not give a fuck about the Royal Family. In fact the moment he heard about his daughter Meghan falling for Harry he went into full recluse mode. No one saw this guy for months. People say he was always a guy who hated the spotlight and now with his daughter marrying the Prince of England he’s against all life as we know it. He moved to Mexico a few years ago after retiring from being a professional lighting director in the movie industry. He now resides in a small town called Rosarito where he enjoys cheap rent, $1 beers, and a plate of tacos for $3 aka THE LIFE. Thomas Markle just doesn’t give a fuck what anything thinks about him and wants to be left alone. How can we not relate to this man?

As we approach the big wedding day on May 19th, Thomas has begun his trek to England where he will walk his daughter down the aisle. Thomas has, as a result, began to show his face again because that’s what happens when you travel and the London/American tabloids want to document your every move. It’s insane what they’re doing to this guy. Most recently they spotted him in San Diego at a 7-Eleven buying random stuff that included: Gas-X to relief farting and bloating, as well as some beer. He’s staying at a $70 motel while he makes his journey across the pond. He doesn’t want any help from his successful TV-star daughter or the Royal Family, he just wants to be left the fuck alone and walk his lovely daughter down the aisle. Once that’s over with, he’s back to Mexico with his $1 beers. The Royal Family thinks they’re the hottest of hot shit to everyone. They think they’re better than you. Not to my guy Thomas. The Royal Family stinks. I love this guy.

Part of me is actually rooting for him to sabotage this wedding kind of like what Dane Cook does at the end of My Best Friend’s Girl. I’m pulling for ya Tommy!