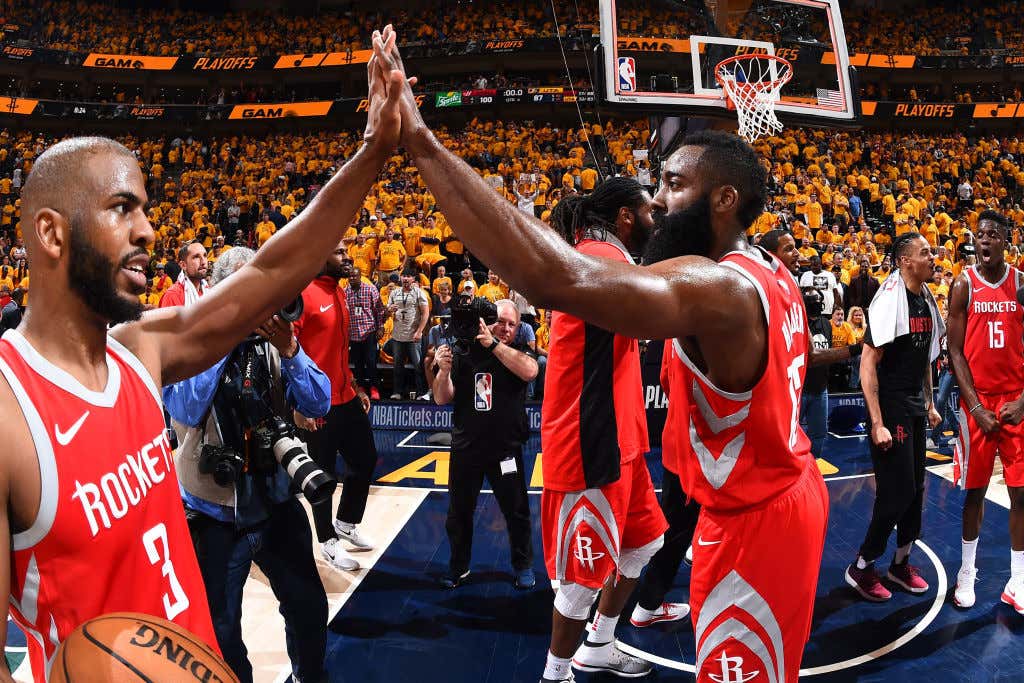 Happy Monday Everybody and welcome to another edition of Last Night In The NBA where we catch you up on everything that went down last night in the NBA. Seeing as how nobody wants to work today, we have two games to talk about, both of which followed the same trend. Last night was all about the better team taking control of the series after a previous hiccup, and both were fairly dominant in doing so. Did you perhaps have a Sunday Funday and miss the action? Don’t judge yourself, just keep reading because here’s what happened

Well, that sliver of hope that many NO fans may have had after the huge Game 3 win is certainly gone this morning. Golden State came back in Game 4 and reminded everyone just how good they are, with an absolute beatdown of the Pelicans Sunday. Even with Curry/Klay going 13-30, they won comfortably, mostly because nobody seemed to have an answer for Kevin Durant

Apparently Draymond send him a gigantic late night text that us normal people have gotten a time or two from a crazy ex, only usually for us it just results in being locked in your bedroom fighting for hours, not going out on a national stage and virtually ending a playoff series. I guess that’s just the difference between us and them. In all honesty Durant was great, he was an efficient 15-27, and for his 36 minutes of action he was the best player on the floor.

He did get some help from Curry who went 8-17

But the story for GS was their recommitment to defense. They were the more aggressive team and it showed, with NO scoring only 38 second half points. That’s the defense that we all remember from GS, and I think the problem with them is they’ve been so good for so long we are kind of bored with them. We as fans look for any potential upset just because we want to see something new. Unfortunately, this team is stupid good. The got another near triple double from Draymond who did everything, and even Quinn Cook came off the bench for 12 points on 5-8 shooting. Now the series returns to Oakland for Game 5, and I would be absolutely shocked if it comes back to NO.

We also saw the return of the Death lineup for GS, which should terrify everyone.

For NO, you probably really wish you had Game 2 right about now. It’s always a little disheartening when you’re at home and you can’t make a shot, which was NO’s primary problem. They finished the night with 36.4/15.4% splits, missed every three they took in the second half, and committed 19 TOs for 21 points. That is going to get your ass kicked by the Warriors 11/10 times. The Pelicans finished with 92 points, which is bad don’t get me wrong, but even worse when you realize GS had 94 through three quarters. Yikes.

and even with 39 points coming from Moore and Holiday on a combined 16-30 shooting, it wasn’t enough

I would say the 1-7 from Mirotic, the 4-14 from Clark, and the 2-10 from Rondo sure didn’t help but even when this team has struggled offensively, they’ve at least been able to rely on their defense. Remember since the All Star Break this had been one of the leagues best defenses. Well you wouldn’t know by watching any second of yesterday’s game.

Even if this series does end in Game 5, this was still a very successful season for the Pelicans. After losing Boogie and not only still making the playoffs, but winning a round and then actually winning a game this series, Pelicans fans should be proud. If anything this probably changes AD’s mind about potentially wanting to leave one day. He now has experienced playoff success as a Pelican, and that may be the most valuable thing of all.

Basically everything I just said about GS/NO also applies to this series. Just when UTA thought maybe they had a chance in this series after winning Game 2 in HOU, the Rockets took a breath, realized they are a historic offensive team, and came into UTA and took em both. You hate to see that as a Jazz fan.

Harden and CP3 basically did what they want, combining for 51 of the 100 points on 20-45 shooting. What’s scary is that the Rockets didn’t even really shoot all that well, just 42/26% and because of that they could never truly pull away. Their defense in the third quarter where they held UTA to just 17 points was huge, as was the play of Clint Capela, who finished with a pretty decent 12/15 and 6 blocks

The Capela/Gobert battle was one I always felt would impact this series the most, really coming down to who would control the defensive end better. CP3 figured out a way to still score around Gobert, and Capela coming out of nowhere to play a team high 37 minutes was pretty crazy. Now just like GS, the Rockets return home for Game 5 and I can’t see this getting back to UTA either. Not with how well the Rockets play at home in addition to the mental edge they now have.

We wanted to see how the Rockets would respond to that early adversity. Some thought maybe they’d crack like they usually do, well something tells me this year will be different

For UTA, just like NO they should be very proud of their season, even if it is about to end. They were WAY better than anyone thought, made the playoffs, had an upset, and also won a game in a series where maybe they shouldn’t have. This was a very successful season for the Jazz, they found a franchise guy in Mitchell and things are looking bright. The bad news is they shot 36/24% and committed 16 TOs. So in that regard it didn’t look too good, but it’s important to consider the bigger picture.

Speaking of Mitchell, he was a little upset postgame as you can imagine

If I heard correctly, something along the lines of “That’s what he needs to win the fucking MVP, fuck him”. Obviously he’s talking about all the calls Harden got, he led both teams with just 8 FTA which doesn’t seem like a lot but Mitchell also isn’t lying. James Harden gets the benefit of the doubt with the officials. That’s nothing new. He’s like Lebron in that regard, you need to figure out a way to accept that and still find a way to win. You have to expect things are going to go his way from non travels to touch fouls. And honestly I have zero problem with what Mitchell said. He’s a fierce competitor and was filled with emotion. I love it. I would just tell him that based on the trajectory he’s on, he will one day get similar treatment. The NBA takes care of it’s stars, and it’s only a matter of time before Mitchell gets that same respect.

And that’s it! You’re now all caught up on everything that went down last night in the NBA. We’re back at it again tonight with two more games that could be potential series clinchers with BOS/PHI and TOR/CLE. As always if you can’t watch just make sure to check back in tomorrow and I’ll fill you in on everything you missed.