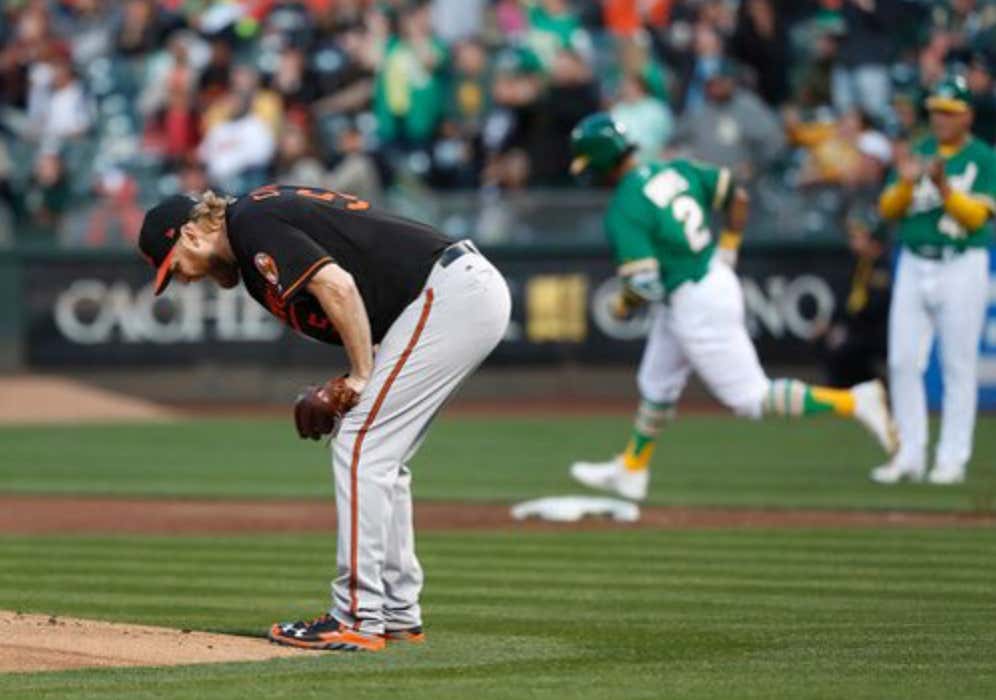 Same losing Orioles, just a different day. After the Orioles went winless on their 6-game west coast road trip vs the Angels and Athletics. On this road trip, the offense managed a measly 17 runs (including 7 in one game) in their 6 games, breaking down to just over 2.8 runs per game. I mean it’s just unreal the level the offense is at now. We’re not even to the middle of May and the team hasn’t sniffed double digit wins, and they’re 17 games back. 17 GAMES BACK! 8-26 on the year and I think it is safe to call this season a wash.  They’ve lost 6 in a row, 20 of 24, and 45 of 57, and in their last 162 games they are 59-103. I said it last week, this isn’t a bad stretch, or a bad half, its just a bad team. They are the worst team in the American League, and only behind Cincinnati (8-27) for worst in all of baseball. The Birds also carry a league worse -72 run differential, the second worst run differential is -58 by the Marlins and Royals. They also haven’t won back-to-back games since early April,  and FanGraphs gives them a 0% chance to make the postseason. I mean I can go on all day with these stats that make me want to throw up…

We’ve talked about it all season long, the offense just stinks. They haven’t gotten into any sort of rhythm, they’re striking out a shit ton, they aren’t even hitting that many homers. At least in the past when they were go big or go home, they were still crushing the ball and losing 9-8. Now they’re just losing 4-1, 6-2 every night. Let’s look at how their team stats match up on the offensive side.

Just terrible with the bat in their hands. Manny (.346/9 HR /27 RBI) is the only one hitting, and that is about it. Chris Davis (.171/2/9) is a train wreck and looks like he’s uninterested at the plate, Mark Trumbo is batting a hair under .300 since he returned to the lineup last week, Chance Sisco (.203/1 /7) and Caleb Joseph (.148/0/2) look overmatched at the plate, Trey Mancini seems to be favoring his knee since sliding into the unpadded part of the fence a few weeks back and is batting .209 since that game, Adam Jones (.245/5/17)  did homer in his 1,500th game as an Oriole which was pretty awesome but he also got hit on the wrist on Saturday and had an X-Ray on it, so we will see how that heals up and if he misses any more games.

Pedro Alvarez quietly has hit 7 homers, but is a slob on the field and on 29 other teams he wouldn’t sniff the field, but because of Tim Beckham being out, he is splitting time at third with Danny Valencia. Valencia was a guy who used to MURDER lefties, and that is what he was brought in to do, only one problem, he isn’t. He’s batting .222 with 2 homers against lefties, not great. Since Jonathan Schoop has been out (he returned tonight after his oblique strain), the Orioles have used a few different bums at second. Jace Peterson, Engelb Vielma, and Luis Sardinas have all had their chance at second and they are basically an automatic out. Peterson has shown that he can play a little, but he’s not moving the needle for me. The Orioles need Schoop back, but I don’t think him being added to the lineup is anywhere close to the spark the team needs. 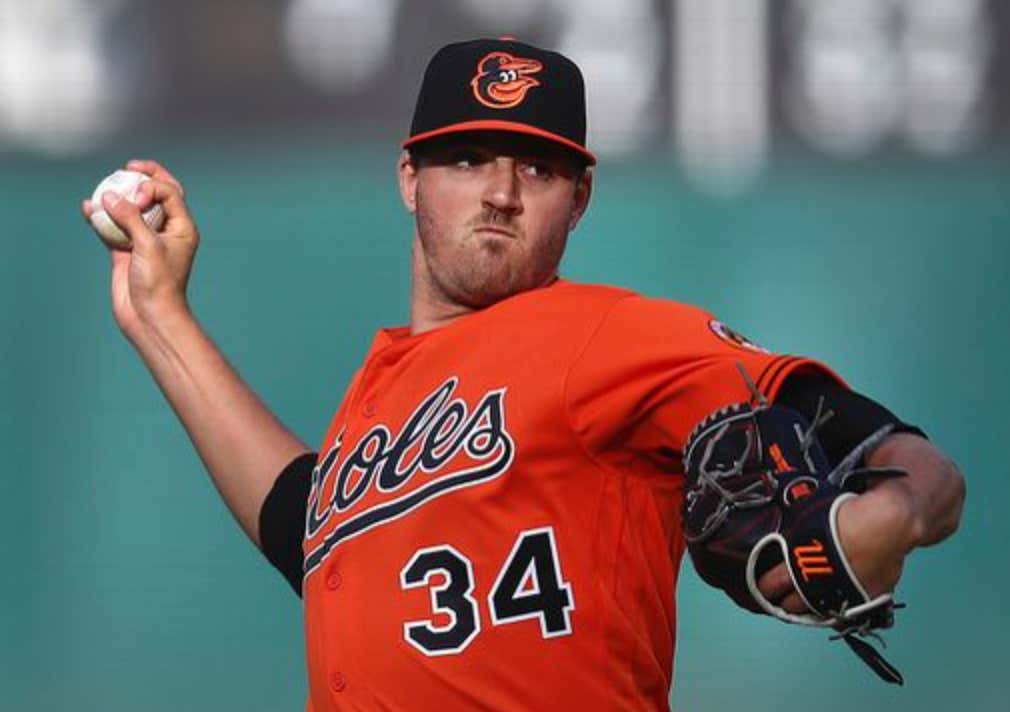 If there was one shining moment this week it was Kevin Gausman’s start on Saturday night against the Athletics. I’ve given Gausman a lot of crap for not being able to piece together a full season, but it looks like he is on his way to a career year. Saturday night was the best start I’ve ever seen Gausman make, 9 shutout innings, 2 hits, 2 walks, and 6 Ks. Because the Orioles couldn’t hit Trevor Cahill, Gausman was left with a no decision to show for it while the Orioles ended up losing 2-0 in 12 innings. #ThatsSoOs. Ever since he gave up 6 ER in his first start of the season he’s been fantastic, only giving up 10 ER in the 6 starts since his opener. He’s sporting an ERA of 3.30 with a 1.15 WHIP and 36 Ks. As I said above, Gausman normally puts together 1 good half and 1 bad half, with Dylan Bundy struggling his last 2 starts (12 ER in those 2 starts), lets hope this is what Gausman is now, and not just another flash of brilliance from him. I know wins and losses is a dumb stat for pitchers to focus on, but it has to be frustrating when you can pitch the best game of your life, give up 2 hits, 0 runs, and your team doesn’t sniff a run. Gausman deserved better from this ugly offense.

With every loss  the question gets brought up, “When do they trade Manny Machado and some other veterans?” ….. I mean Dan Duquette said he is targeting Memorial Day as a barometer on if they will sell or not. But lets be real, DD isn’t doing anything with this team anymore. He’s showing up to get a paycheck and thats it. Brady Anderson and the boys need to make something happen. The team is the worst team that Baltimore has put out in YEARS. They’re getting shitcanned every night while the guys in the Warehouse are sitting on the biggest trade chip and most talented player to ever wear Orange and Black, and instead of trading him back in December like they probably should have, they said they are WAITING ANOTHER 2 WEEKS TO SEE IF THE TEAM WILL TURN IT AROUND. I understand there are things going on in the warehouse that aren’t baseball related so the focus isn’t on the club, which makes sense because they are a disaster, but man, this is getting ugly. As Carrabis and Dallas pointed out, every day Manny is in an O’s uniform is a day too long.

I do believe that DD and Buck Showalter’s jobs are safe because again, there are things happening in the warehouse where the main thought isn’t baseball, and the team is so bad, firing these guys aren’t going to do anything anyways except complicate a situation that is already bad. The Angels’ don’t want to fire a GM or Manager and have to pay whoever they let go while they aren’t on the job. There was talks that if heads were going to roll, yesterday would be the day. Day off after a long, winless road trip but everyone kept their jobs. I heard some coaches were being looked at, but again, letting go of a hitting coach won’t really change anything on a 8-26 team.

I haven’t seen a team who was said to be in contention for a wild card spot at the beginning of the season fall on their face like the Orioles have. They haven’t had any major injuries either, it’s just like all the PECOTA rankings and stat nerds from years past have all caught up to them. The rest of the season is dedicated to me cherishing Manny Machado until he is shipped out, and seeing if they ship out other veterans and try and build up a farm system that needs help.

Royals come into town tonight for the start of a 9 game home stand, while be interesting to see the crowd sizes, how the team plays going forward.