Clem wrote a blog yesterday about Patrick Beverley’s mom making The Price Is Right her bitch, and that got me thinking about my favorite game show, Family Feud.

Every contestant always appears to be having the time of their life… but fuck fun, if I’m on the show, I’m playing to win, and I’m doing it with this Barstool Dream team. 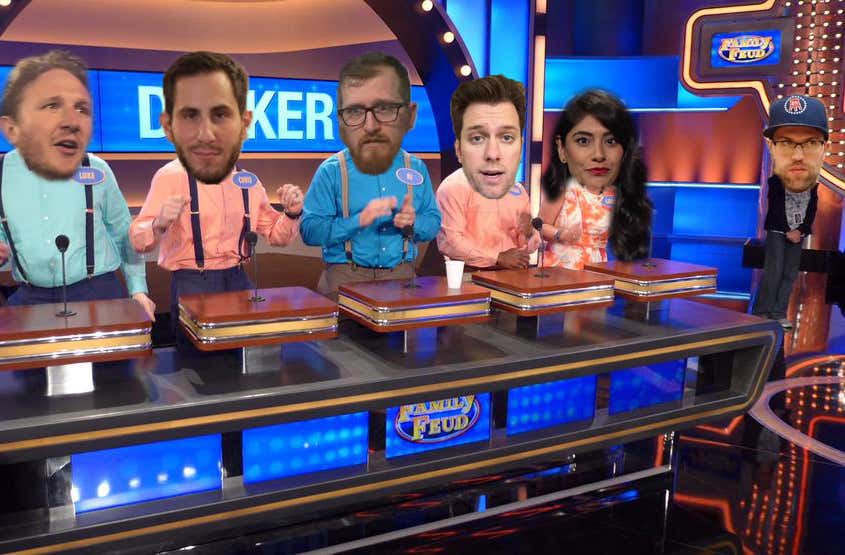 Feitelberg: Feits participated in several mini-game shows on the Emmy-winning show you guys were are OBSESSED with, Spinzone of course, and the man is cool, calm and collected under enormous pressure. He doesn’t really give a shit about ANYTHING, so you’re not going to rattle him or make him nervous.

It’s also with noting, Feits is the daddy of the group. He’s in love with Kmarko…

…and his brother/business partner is Kevin:

KMarko: As mentioned, he’s kind of a package deal if you want Feits, but fortunately, he also brings his own redeeming qualities.

For starters, he’s the smartest of the group, and every successful team has one nerd who spends entirely too much time on the internet, reading/writing every single story under the sun. While Keith hasn’t personally lived a full life, he’s certainly read about OTHER people who have, and you never want to underestimate the guy who knows a ton of stuff.

Chaps: It would be a sin to not put Chaps on the team. Let’s face it, he knows everything about everything, while simultaneously knowing everything about nothing. He was built for Family Feud and would without a doubt charm the fuck out of the audience with his poetic dialect… and his Purple Heart, which he would obviously have to wear.

Everyone loves an American hero, and we need all the help we can get. He tells a war story, we automatically become America’s Sweetheart, and all of a sudden our questions are 100 people polled: what are five toppings you put on your pizza?

KFC: Kevin calls himself white trash on a regular basis and NOBODY is better at Family Feud than a white trash man with NYC grit.  Not only does Kevin easily make this roster, this MOFO is playing fast money.

Me: Duh. I mean, what am I not going to put myself in my own Family Feud Dream Team? I’ll make the argument though. I’m extremely competitive and good at organizing get togethers, and in turn, the group. I’m not the smartest in the group (nor do I come close to having the best hair), but believe you me, if I need to flirt with Steve Harvey and buy a little more time in order to formulate the game-winning, two-strike answer, I will step up to the plate. I will do anything to win. ANYTHING.

He’s smart, clever, quick, but most importantly, he has a warped mind that could come in handy if we’re ever in a Charlie situation:

We gonna be rich.