The Foghorn newspaper, which is created by Del Mar College students, released their latest publication Monday morning with an article mentioning sex advice for students who are taking their finals.

The headline on the article reads,”Finals aren’t the only thing going down.”

Robert Muilenburg, the Associate Professor of Journalism over at Del Mar College says, this article was the student’s attempt at parody or humor.

“I think he’s produced at least four of them over the entire semester, but what made this one different is that he included illustrations to go with them,” Muilenburg said.

But given the feedback, it’s gotten in just the last 24 hours, Muilenburg admits the student, Mark Young who is also the Fog Horn’s Editor in Chief, may have missed the mark.

“I advised Mark, I saw it, I read it. I saw it all before it went out and we talked about the potential repercussions,” Muilenburg continued. “This is not reflective of the person in general perhaps at worst, a misstep.”

Look I don’t really buy into the “you don’t learn anything in college, college isn’t important” crowd.  Sure a lot of the pre-reqs you’re forced to take that in no way apply to your major and your career path are a pain in the ass and seem useless at the time, but being exposed to different ideas out of your comfort zone, learning how to think critically, challenging yourself to understand concepts that you’re not familiar with et cetera et cetera is all pretty beneficial, especially at that time in your life.  Having said that, there’s no question that by far the most important things you learn in college are: living on your own, your drinking limits, and sex.   No matter how good your game is, it’s very, very likely your sex life in the real world is going to be nothing like your sex life in college.  Just 4 straight years of partying surrounded by an infinite amount of girls also looking to have sex.   So I’d argue an article in the school newspaper about sex and sex tips and making sex better is probably the most important article a school newspaper will publish.

Apparently not for the prude snowflakes at Del Mar College!

I guess the problem isn’t the content, but the cartoons? That’s where they draw the line on decency. Sucks for all the visual learners out there. Or, more specifically, sucks for all the girlfriends of visual learners out there – finally got their selfish boyfriends to see something encouraging them to go down on them and now it’s being ripped off all the news racks. 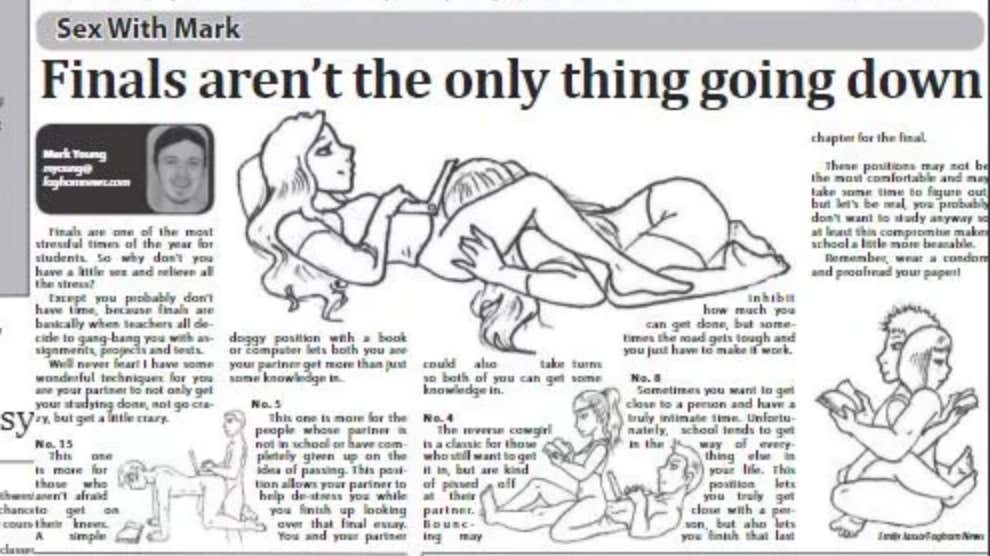 Guess the administration and local media doesn’t want any of the Del Mar kids having good passionate sex with equal giving from both partners.  Sad.  Sexuality is something that should be celebrated not shunned, and that includes cartoon sex.