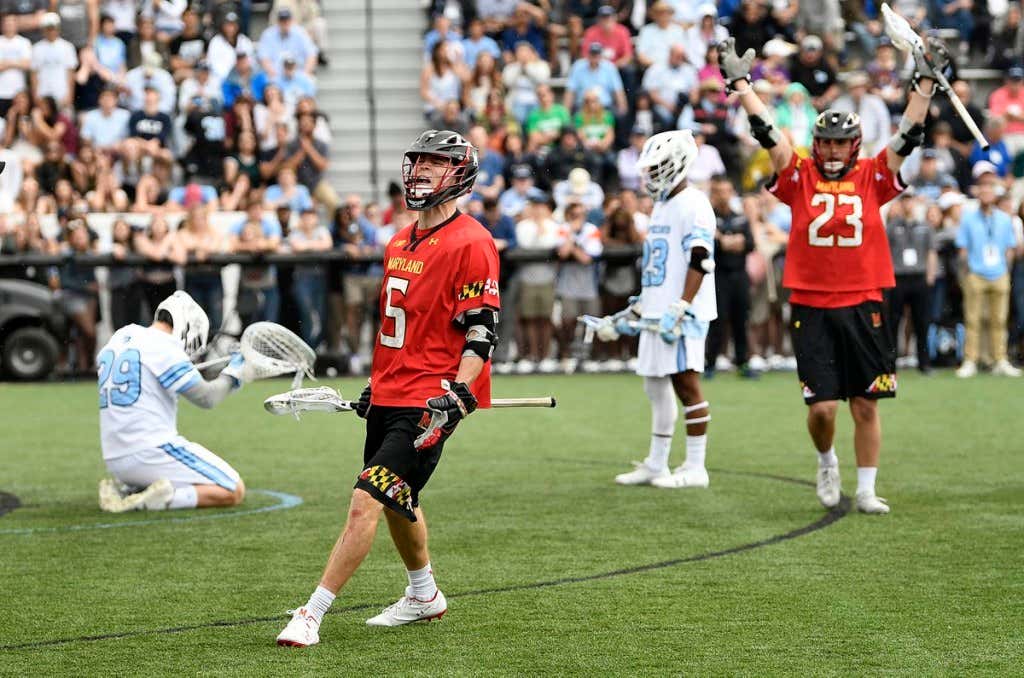 The first time that Maryland and Johns Hopkins played a lacrosse game against each other was in 1895. To put that into perspective, Shack Stanwick was only a freshman that year. Since then, the two teams had played each other 115 times with Hopkins leading the all-time series 71-43-1. On Saturday, they met up for the 116th time on Homewood Field and it did not disappoint. I mean, we should have known we were going to be in for a beauty of a game as soon as Hopkins came out wearing these lids. 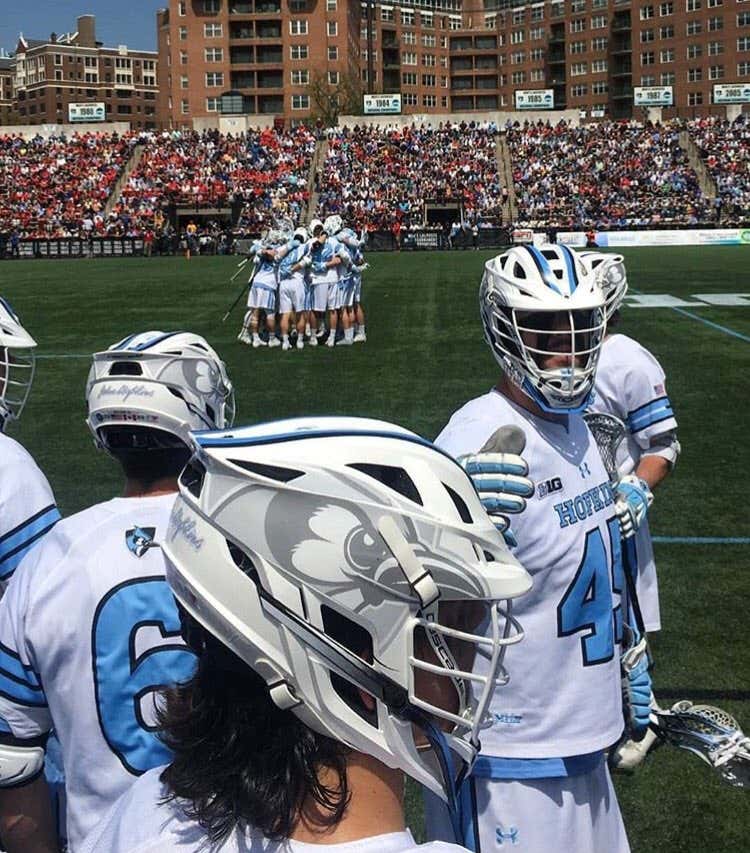 I am very much sexually attracted to these buckets. I know that Hopkins would end up losing the game and we’ll get into that more in a moment, but these are the types of helmets that can propel you to Memorial Day Weekend. These helmets were made for MDW and you know it.

Now the game itself was a little sloppy if we’re being perfectly honest. I feel like both teams must have turned the ball over at least 4 or 5 times just because they didn’t back up shots. You’d figure two teams of this caliber wouldn’t make mental errors like that but I guess in a heated rivalry game like this, sometimes the adrenaline takes over and your brain shuts off. But yeah. Neither team looked particularly dominant at any point during the game but since both teams were both a little sloppy, it all evened itself out and the game would eventually go to triple overtime for the first time in The Rivalry’s history. And in 3OT, it was Will Snider delivering the dagger for the Terps.

Only thing missing here was a “Time. Room. BULLSEYE” goal call. With that win, the Terps are the regular season Big Ten Champs and they’ll have Rutgers in the B1G Tournament semifinals. Meanwhile Hopkins ends up with the 2-seed in the tournament and they’ll play Ohio State who has decided to wake up in these final few weeks winning 3 in a row against Michigan, Maryland and Rutgers.

So the Big Ten Tournament is set after this weekend but a couple of conferences already wrapped up their tournaments. This past weekend we had the ACC and Patriot League tournaments. If you’re a fan of chaos in college lacrosse then you’ll probably want to inject the ACC Tournament directly into your veins.

For starters, we had a couple of upsets in the semifinal round. Notre Dame finally decided to start playing offense again this weekend and were led by Bryan Costabile and Ryder Garnsey in their takedown of Duke on Friday.

We’ll get more into Notre Dame’s offense flipping the switch later. But that was a 14-11 win for the Irish. And in the 2nd game of the night, it was Virginia coming away on top of a 1-goal game against Syracuse after losing to ‘Cuse by 1 in the regular season. Michael Kraus was an absolute monster in that game.

The biggest thing from this game was that the loss for Syracuse most likely means that they’ll be out of the NCAA Tournament. They were 7-5 on the regular season but only had 3 wins out of conference (Binghamton, Army and Hobart). So 3-5 out of conference and then a loss to Virginia in the ACC semis. That’s just not good enough so their season is probably done now after they wrap things up against Colgate next week.

Not great! Notre Dame won the ACC Championship 17-7 and that’ll do it for Virginia’s season. Not a terrible go for the Cavs considering they went winless in the ACC all of 2015, 2016 and 2017. Now in 2018 they played in the conference championship. So things are looking fine for Virginia moving forward. But things are looking even better for Notre Dame right now because this is a team who is finally putting it all together at the best possible time.

In these two ACC Tournament games, they scored a combined 31 goals. Ryder Garnsey had 8 of those goals

First of all–this is a gritty take by Garnsey. If you’ve been following Notre Dame all year you’ll know that for some reason or another, Ryder hasn’t been able to keep himself on the field for full games at a time. Not exactly sure what was going on there during the regular season but you’d think a kid like that should be on the field for a full 60-minutes every game as long as he’s healthy. This take right here is all you need to see. Plenty of kids will see that slide coming at them and they’ll shy away from contact, try to take that shot from GLE, get stuffed and it goes the other way. Garnsey doesn’t give a fuck. He knows he has a step on his man, knows that a slide is coming, still takes that extra step above GLE to get his angle, takes a hit but it’s in the back of the net. That’s a stud move.

And with guys like Garnsey and Costabile and Gleason snapping off this weekend, Notre Dame now looks like one of the more complete teams in the nation. This whole year we’ve known that Notre Dame had a bunch of takeaway assassins on defense. We knew they are a team who is going to be an absolute nightmare for any offense to go up against in college lacrosse. But their own offense has been letting them down at times. They only scored twice against Duke in the regular season. Only had 6 against Syracuse. Only had 7 in a shaky win over Marquette. Those numbers won’t cut it in May. But 31 goals in their last two games? Getting hot at the right time right before the NCAA Tournament? I wouldn’t be shocked to see this team end up at Gillette if they keep playing this way.

So the Patriot League Tournament had Loyola vs BU in the first semifinal matchup. It wasn’t quite the 23-9 beatdown that happened in the regular season but it was still a 13-8 win by the Greyhounds. In the 2nd semifinal matchup we had Navy taking on Lehigh. This game went to overtime and it was Lucas Spence, the pride of Delco, calling game for the Mountain Hawks.

Kind of disrespectful to the Troops but whatever. But yeah. That would be all she wrote for Lehigh because then they had to face Loyola in the Patriot final. And Loyola is complete fucking buzz saw right now. I mean it was close for the first half but then Loyola decided to turn it on and they came away with a 15-8 win. Obviously led by Pat Spencer.

29 goals. 50 assists on the season. I’ve definitely said this before but there are so many elite attackmen in college lacrosse that I feel like Spencer gets overshadowed from time to time. Sowers, Teat, Reeves, Guterding, Kelly. I mean there are 8 attackmen in the nation right now with over 70 points. I don’t think Pat Spencer is underrated at all. I think everybody knows that he is one of the best players in the country. But with how fucking good this Loyola team is and how deep of a run they’re about to go on, I think we’ll be hearing plenty more from Pat Spencer over the next month. That’s now 6 wins in a row for Loyola and their closest one was by 4-goals. Not a big deal.

Stepping away from college lacrosse real quick. Marcus Holman set an MLL record yesterday putting up 11 genos in one game for the Ohio Machine as they waxed the New York Lizards. 11 goals in one game. Eleven. That is absolutely preposterous. First game of the season for the defending MLL Champs and they come out of the gate with that. Do I still think the Machine would have been better off if they had me on the roster? Absolutely. But after seeing Marcus put up 11 yesterday, I guess I can’t fault Coach’s decision for not calling me back after those tryouts.

P.S. – We’ll have the Weekend Recap/Top Ten breakdown episode of The Crease Dive out tomorrow. Make sure you smash that mother frickin’ subscribe button now so you don’t miss it.