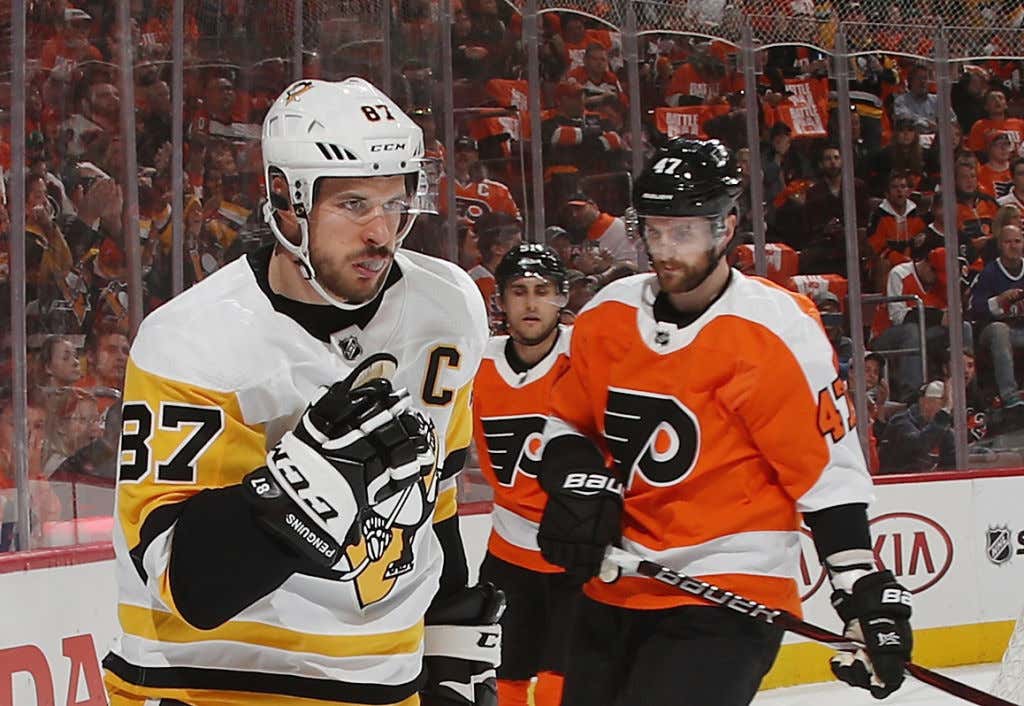 Before we get started real quick I just have to lead off with Sean Couturier. If you don’t know by now, Couturier had been playing the last two games of this series with a torn MCL. That’s an injury that should keep professional athletes out for at least a month, and Sean Couturier only missed one game. Not only did he only miss one game, but he scored the game winning goal in game 5 and then came out to have a hat trick and 5 points in game 6. Five points in an elimination game on a torn MCL.

Sean Couturier deserves a world of praise for his performance as well as guys like Ivan Provorov who were also playing through some very serious injuries. It’s just a shame that those two guys were doing everything they possibly could to win that game yesterday while the coaching staff and management was not. But we’ll get into that later in the blog.

As for right now, the 2017-18 Philadelphia Flyers (men’s professional ice hockey team) season has officially come to an end. It was a year that will probably go down as one of the most bizarre in franchise and possibly league history. This team lost 10 straight games in November and early December. They battled back and climbed they’re way into a playoff position. They started to see that playoff spot start to slip away but finally ended up clinching a berth to the Stanley Cup Playoffs on the last day of the season. And then once they got into the playoffs? Well… I mean…

It wasn’t great. The season was filled with plenty of highs. A lot of lows. And unfortunately, the Stanley Cup Playoffs just so happened to be the lowest point of it all. It was an ending to the season that leaves the fan base with a bit of optimism for the future, but mostly just a bunch of questions. And most of those questions have almost nothing to do with the players on the ice.

Where To Go From Here?

Another thing I just want to clear up before we keep going here. I know I’ve been pretty frustrated with this team for a lot of the season. I know I’ve probably been a little more negative at times than I’ve needed to be. But I’d say 95% of my frustration stems from Dave Hakstol and Ron Hextall. Mostly Dave but I don’t want to let Ron off the hook too easily either. That’s what is tough. I talk shit on this team a lot but I’m a huge fan of the majority of the roster. There are just some very clear and obvious spots that need to be changed, but it’s the coach’s and management’s fault that they’re in that spot to begin with. So yeah. I just want that to be known while we close out the season here that there are definitely some players on this team that I don’t like, but I’d back the roster in it’s entirety before I back the coach moving forward.

To me, I just think this playoff series has to prove that Dave Hakstol is not the guy fit to take this organization from a bubble playoff team to an actual contender. I realize he’s been stuck with shitty goaltending. I realize he’s working with a younger, inexperienced team. But time and time again, he takes a shitty hand that he was dealt and he proceeds to then take a lighter to that shit to make it even worse. Like continuing to run a defensive pairing out there of Brandon Manning and Radko Gudas. Arguably two of the worst defensemen in the league and for some reason they’re untouchables in his eyes. Then you see Radko Gudas go out there and make mistake after mistake leading to that Penguins comeback yesterday. Obviously those are both guys who I hope to never see wearing an Orange uniform ever again. But as much as they suck together as a pairing, it’s equally Dave Hakstol’s fault for putting them in that position. And something that has always bugged me about Dave Hakstol is his fucking attitude. He’s always got this “I’m right, you’re wrong” type of mentality that he’s trying to prove to the fans despite the fact that he’s done nothing in his 3 years here in Philadelphia besides get us embarrassed in the playoffs twice. Any time he gets questioned by the media or the fans, I feel like he doubles down and is constantly sacrificing this team’s success just to try to prove a point. Like acting as if we’re all brain dead idiots for even questioning him keeping Brian Elliott in this series while anybody with eyes in their skull realized that Elliott doesn’t have it in him. He’s just such a smug bastard and he hasn’t earned a single ounce of that smugness. He deserves credit for moving Giroux to the wing and sliding Coots up as the 1C. Other than that, he’s done nothing with this roster that the team couldn’t have done themselves with or without him. He probably won’t get fired this offseason. Ron Hextall is equally as stubborn. But he better have the shortest damn leash in America to start next season.

Ron Hextall is becoming an issue as well. I know that he’s done a great job so far of trying to fix the major flaws he inherited from the Holmgren Era. The Flyers are in a position now where they have some cap space to work with. The Flyers are in a position now where they have a ton of young talent in the organization and (fingers crossed) as soon as Carter Hart arrives, the Flyers 30-year long drought without a legitimate goaltender will finally come to an end. But like I said at the beginning. It makes me sick to my stomach to see guys like Sean Couturier and Ivan Provorov do literally everything they possibly could to help this team win right now. Just watch this post-game interview from Provy.

He’s a fucking warrior and so is Coots. These guys were risking their own health. Risking their own bodies. They shouldn’t have been playing in that game but they care about this team and all they want to do is win and win now. The coach and management doesn’t care enough to help these guys out. I know that help is on the way in a few years. But if Ron Hextall is able to watch those performances by guys like Provorov and Couturier, and not make any immediate changes to this organization in the offseason? Well then he’s gutless and you would have every right to lose faith in him. I’ll give him the offseason before I make any judgment one way or the other. But some changes need to be made to show these guys that management cares at least a quarter as much as 9 and 14.

The type of changes I’d like to see? Well they really fucked up by signing Elliott to a 2-year deal as well as re-signing Neuvirth. One of them HAS to go. You cannot go into another season with a goalie tandem of consistent mediocrity at best, absolute mountain of dog shit at worst. You need to buy out a contract like Jori Lehtera. You have to let Brandon Manning and Valtteri Filppula hit free agency. And then there’s obviously the coach. I think it’s clear at this point what I’d like to see happen with the coach. But at the very least, if you don’t fire him in the offseason then you need it to be well known that Hakstol has like 5-10 games max to start the season without getting shit canned. If the Flyers come out of the gate slow and it’s the same exact thing over and over again, then you have no other choice but to send him back to North Dakota. A mid-season coaching change has already sparked one team in Pennsylvania to back-to-back Stanley Cups. Maybe it can work again this time.

Picking Up The Pieces

As for guys who I think 100% need to be back on the roster next year or else we riot? Well obviously you have Sean Couturier, Claude Giroux, Ivan Provorov, Nolan Patrick, Travis Konecny and Shayne Gostisbehere. I think that is my list of untouchables at the moment. Obviously some key names are left off of that list. It’s not saying that I don’t want to see those guys back on the roster next season. But if an opportunity presents itself to move on from one of those guys to pick up something better? You at least have to consider the option. Those guys who I’m talking about would be Jake Voracek, Wayne Simmonds, Robert Hagg, Travis Sanheim, etc. Again, I would like to see the majority of those guys back in Orange and Black next season. I’m just saying that you’d at least have to listen to some offers. But obviously the biggest issues with this team are in the net and behind the bench, so I’d like to see those addressed first.

Other than that? I think the most important thing would be to give Sean Couturier and Ivan Provorov letters on their sweaters next season. It’s time to start the transitioning process and making it their team. One of those guys is going to be the next captain of the Philadelphia Flyers. I’m sure they’re already leaders in the locker room even without the letter. But those two guys have proved they deserve the letters and earned every single stitch it’ll take to put them on there.

I really wanted to mention how much I hate every single fan who threw something on the ice yesterday but I don’t want to end this blog on a sour note. Just know that if you threw a beer can onto the ice, you should be ashamed of yourself and you are the definition of a coward. Especially if you were intentionally aiming towards a player or a ref. But yeah, I won’t end on that.

So instead, I just want to wrap this up by saying a quick thank you to everybody who has followed along all season long. I got to see a bunch of you guys out at either Xfinity or in the Wells Fargo Center yesterday. Every time you guys come up and say you enjoy my work or something like that, it means the world to me. Like I really can’t even begin to tell you how much I appreciate it. This team may drive us crazy sometimes but at least we all get to go crazy and lose years off of our lives together. But yeah, I can’t thank you guys enough for the support all season long and I actually can’t thank you Pittsburgh fans enough either for always making it an interesting year on Twitter or in the comment section. No, I’ve never seen the Flyers win the Stanley Cup. Yes, 1975 and everything like that. You guys may be idiots and the least creative/most unoriginal fanbase in the world, but at least you’re relentless. And I can respect that.

Love all you guys. Trust The Process.