It was announced today that Technical Sergeant John Chapman will be the first Post 9/11 Airman to receive the Medal of Honor. This distinction will be bestowed upon him posthumously, 16 years after his incredible bravery on a mountaintop in Shah-i-Kot Valley, Afghanistan.

Chapman was with special forces as they fought to gain elevated positions in the mountains but the intel was off. They were met with appx. 800 more enemy combatants & more advanced weapons than anticipated. On March 4, 2002, as their Chinook neared the drop-off point, they began taking RPG fire and Navy SEAL Petty Officer 1st Class Neil Roberts fell out of the back. Due to thin air and damage, the pilot had to land miles away.

It was during the rescue mission for Roberts that Chapman himself was left behind, mistaken for dead under heavy fire.

…Air Force Technical Sgt. John Chapman, was alone in the pitch-black, wounded and slowly regaining his consciousness in the thigh-deep snow of a 10,469-foot peak known as Takur Ghar, as scores of Al Qaeda fighters closed in.

Footage from a predator drone would show he was wounded, but still alive. Taking cover in a bunker, he killed one enemy with his rifle and one hand-to-hand.

As the sun began to rise amid the sound of the cavalry coming — Razor 01 and 02 helicopter chalks carrying a quick reaction force of 35 Army Rangers — Chapman rose from the bunker to provide cover fire, but he was struck twice in the chest by Al Qaeda machine-guns, killing him instantly.

As you start off your weekend consider taking a moment to raise a glass to those like John Chapman, an Airman who used his last moments of strength to fend for his brothers instead of himself. 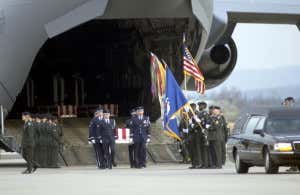 Here’s the complete citation on heroism on full display. The award with rightly be upgraded from the Air Force Cross.

CITATION:
The President of the United States of America, authorized by Title 10, Section 8742, United States Code, takes pride in presenting the Air Force Cross (Posthumously) to Technical Sergeant John A. Chapman, United States Air Force, for extraordinary heroism in military operation against an armed enemy of the United States as a 24th Special Tactics Squadron, Combat Controller in the vicinity of Gardez, in the eastern highlands of Afghanistan, on 4 March 2002. On this date, during his helicopter insertion for a reconnaissance and time sensitive targeting close air support mission, Sergeant Chapman’s aircraft came under heavy machine gun fire and received a direct hit from a rocket-propelled grenade which caused a United States Navy sea-air-land team member to fall from the aircraft. Though heavily damaged, the aircraft egressed the area and made an emergency landing seven kilometers away. Once on the ground Sergeant Chapman established communication with an AC-130 gunship to ensure the area was secure while providing close air support coverage for the entire team. He then directed the gunship to begin the search for the missing team member. He requested, coordinated, and controlled the helicopter that extracted the stranded team and aircrew members. These actions limited the exposure of the aircrew and team to hostile fire. Without regard for his own life Sergeant Chapman volunteered to rescue his missing team member from an enemy stronghold. Shortly after insertion, the team made contact with the enemy. Sergeant Chapman engaged and killed two enemy personnel. He continued to advance reaching the enemy position then engaged a second enemy position, a dug-in machine gun nest. At this time the rescue team came under effective enemy fire from three directions. From close range he exchanged fire with the enemy from minimum personal cover until he succumbed to multiple wounds. His engagement and destruction of the first enemy position and advancement on the second position enabled his team to move to cover and break enemy contact. In his own words, his Navy sea-air-land team leader credits Sergeant Chapman unequivocally with saving the lives of the entire rescue team. Through his extraordinary heroism, superb airmanship, aggressiveness in the face of the enemy, and the dedication to the service of his country, Sergeant Chapman reflects the highest credit upon himself and the United States Air Force.