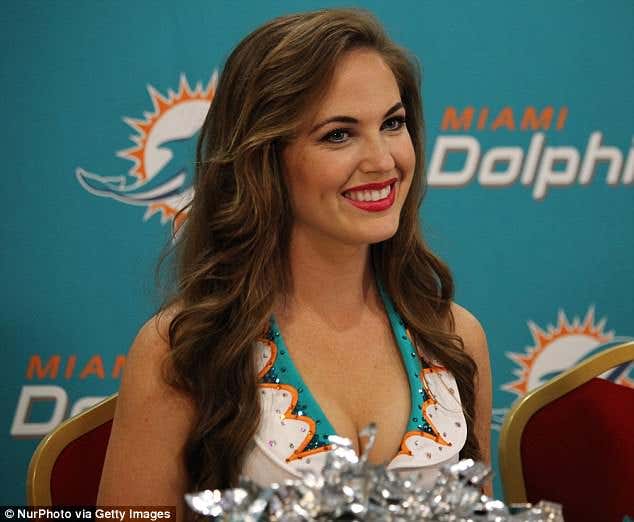 Source – A former Miami Dolphins cheerleader has sued the team and the National Football League for discrimination over claims she was treated unfairly because of her virginity and religious beliefs.

Kristan Ann Ware filed a complaint on Wednesday to the Florida Commission on Human Relations which stated she was ‘discriminated against on behalf of her gender and religion’, the Washington Post reported. …

The events leading up to Ware quitting the team started on a bus ride in London in 2015 where she told her teammates she was a virgin after they were talking about what songs they listened to while having sex.

She explained to her teammates that she had no intention of having sex with anyone until she was married because of her religious beliefs. … In the suit, Ware said she felt like she was discriminated against by the team’s media staff because they would edit down her blog posts and would not share anything from her accounts that mentioned God or religion.

The coaches allegedly told her she needed to stop discussing her virginity around the team … The meeting also included a moment when Ware was allegedly told to change into a bikini and was photographed to make sure she was ‘calendar ready.’

I’m going to choose my words carefully here because I totally respect Kristan Ann Ware’s desire to do what she wants – or doesn’t want – with her body. Even if that prevents every man in the world from enjoying it except her future husband. Or saving herself for her second husband, for all I care. This is still America(ish.) We almost have freedom. And until further notice, grown ups have the right to bang or not bang other grown ups to their hearts content. No matter if other people would say a body like hers is a terrible thing to waste. Personally I made the choice to lose my virginity. Then after 20 years or so of marriage I got it back. But those were my choices and she made hers. So, respect. Of a sort.

But still, does that mean the Dolphins have to keep her on staff? It’s not like she works in HR, their front office, sales and marketing or anything. She’s a cheerleader. Teams are entitled to field the kind of personnel they want. Cheerleaders who fit their scheme, so to speak. In the same way that the coaches might prefer smaller, more agile offensive linemen over fat guys or tall, rangy cornerbacks to shorter, more physical ones, maybe who ever is in charge of their cheer squad prefer the ladies sexed up?

This isn’t some sort of reverse slut-shaming. It’s just recognizing the requirements of the job. To some organizations, the role of the cheerleader goes beyond just leading cheers. Pep is good. But some value, say, community service. Or being goodwill ambassadors. Others like the Dolphins place an emphasis on your “calendar readiness” and your ability to convince creepy middle aged men they could possibly have sex with you. It’s a matter of philosophy. And there’s nothing worse for business than someone bragging about still having her V-Card, talking about God all the time and putting bible verses on her shoes. It messes up the whole game plan for everybody else.

Again, Kristen Ann Ware is free to do what she wants with her personal life. She’s free to go cheer for some outfit that’s not trying to sell sex. The Dolphins just prefer their sidelines to be staffed with attractive, sexually experienced young ladies who aren’t going to kill the paying customers’ buzz with their Christian guilt. That’s not discrimination. It’s just football.