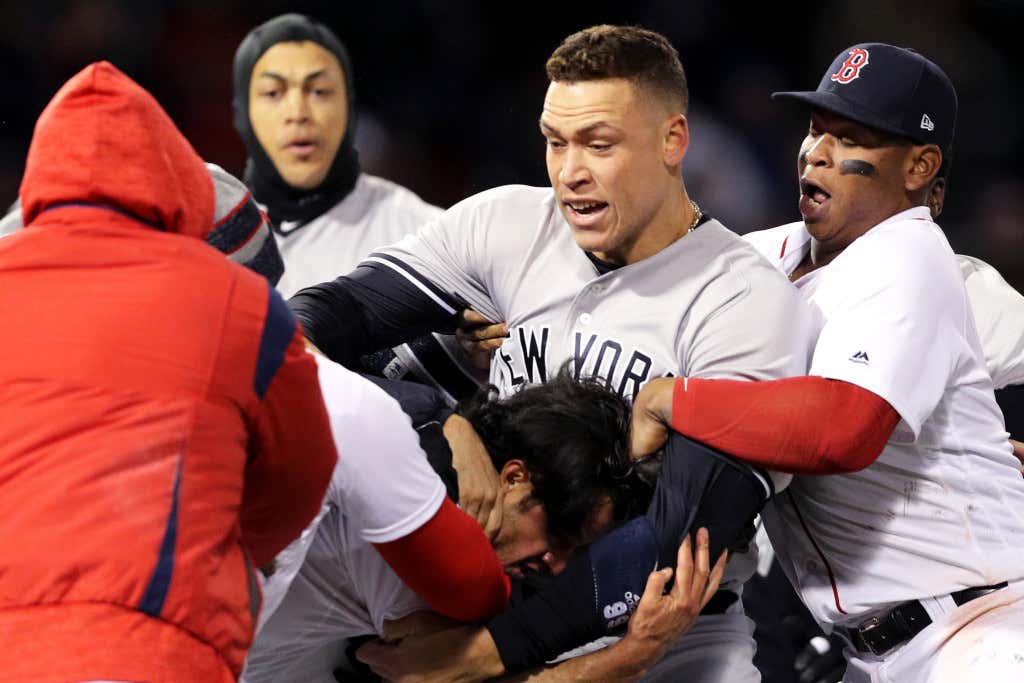 Oh boy what a night. I mean that’s everything you want from a Red Sox Yankees battle, regardless of what month we’re in.

The Yankees had to come out with a pulse after Tuesday’s 14-1 drubbing and they did just that. Brett Gardner worked an immediate full count and then reached on an infield single. Hopefully Aaron Boone never benches the Yankees veteran leadoff hitter after a full day off for Shane Robinson ever again because he was so important in this game. Anyways, Gardner reached and Judge followed with a walk. That brought the man who has faced all the criticism over the last 10 or so days, Giancarlo Stanton. Giancarlo took David Price’s 92 mph fastball and pissed on it, sending the ball to the deepest part of Fenway Park, into the triangle resulting in a two run triple. Three batters, two runs, zero outs. That’s how you answer the bell after getting your shit kicked in the night before.

With one out up came the slumping Gary Sanchez. Now I hate to give myself any sort of credit here, but earlier today on the rundown I was laughed out of the building by Feits and KFC for my prediction that Gary Sanchez was going to continue to terrorize David Price and take him deep tonight.

Gary Sanchez, being my pal, backed me up. J.D. Martinez might still be waiting in left field for this ball to fall back down to Earth.

Anybody have Gary Sanchez’s updated career stats vs. Price? Oh I’ve gottem’ don’t you worry: 6 for 12 with FIVE HOME RUNS. When David Price goes to sleep he has nightmares of El Gary. If there was ever anyone to get our slumping catcher going it had to be Price. What a bum. No matter how good he can look against the Rays and Marlins he’ll never get past the Yankees. After one inning and 35 pitches Price left the ball game with “tingling in his hand.” Yeah okay pal, you had nothing tonight and made something up. Now to anyone that thinks Yankees fans were cheering for Price’s “injury” they are mistaken. If Price stays in the Yanks might have put up a 20 spot. I want that guy pitching every single game against us.

In the top of the 3rd Tyler Austin went sliding into second base with his spikes up. Brock Holt took exception to it, but I don’t think Austin had any ill-intent. A few words were exchanged and the benches cleared momentarily before everyone stopped standing around doing nothing and headed back to their dugouts. You had a feeling during Austin’s next at bat something would happen.

In the 4th inning Gary Sanchez came up again with a man on and one out and unloaded a fucking piss rocket to left center.

Gary Sanchez has awoken from his slumber. The most all around hitter in our lineup has joined the 2018 MLB season.

In the bottom of the 5th the Red Sox began to lay off of Tanaka’s splitter and slider, extending at bats and getting men on bus. J.D. Martinez came up with the bases loaded and unloaded on a ball to dead center, a no doubt grand slam. Why would things ever be easy right? The Sox deficit was trimmed to two, but Tanaka managed to get out of further trouble and held the lead right there. I thought the Yankees needed at least two more insurance runs for me to feel comfortable again and in the 6th they played a bit of small ball to accomplish that task. Gardner led off with a walk, stole second and advanced on a throwing error to get to third. I want to see aggressive Brett Gardner on the base paths this year so more of that would be fantastic. The Sox brought the infield and Giancarlo Stanton ripped a ball no less than 200 mph up the middle for a base hit. If that ball was at any infielder they simply would’ve evaporated. Stanton reached third base after two Matt Barnes wild pitches and was brought in on a Didi Gregorius sac fly. Small ball Yankees! We did it!

Tyler Austin came up in the top of the 7th and you just knew Joe Kelly was going to retaliate for the slide earlier. A fastball came zipping inside, but missed Austin. Would that be it? Just a warning pitch? Nope, another fastball came flying in hitting Austin in the elbow area. He immediately smashed his at on the ground in the most awesome way possible and charged at Joe Kelly. Fireworks!

I said this in February, this rivalry isn’t back until we get these two teams in a benches clearing brawl. Never in my wildest dreams did I think it would happen on April 11th. Austin charges at Joe Kelly and they basically both miss punches as Austin falls to the ground. Sonny Gray and CC Sabathia, with his hip contusion, sprint in and start shoving dudes. Aaron Judge puts Joe Kelly in the quickest of head locks, playing sort of peace maker/ sort of “if you try something stupid I will snap your neck.”

Tyler Austin gets a very clean right handed hook on the Red Sox third base coach. That will most definitely warrant a 5-10 game suspension. Chris Sale runs in likely with a scissor to cut up some jerseys but Gary Sanchez manhandles him and pulls him out of the scrum. The entire pile of bodies swiftly moves towards the Red Sox dugout because that’s what Giancarlo Stanton and Aaron Judge decided they wanted to do. If they wanted to kill anyone they would have. Luckily for Boston, those two decided to play nice tonight. Maybe in July we’ll get some real punches and fatalities.

Overall the three people ejected were Joe Kelly, Tyler Austin, and Yankees third base coach Phil Nevin, who I’m still not sure what he did wrong. I’m expecting probably eight games for Austin considering he landed the only visible punch, and five for Kelly for deliberately throwing at Austin. I think the most impressive part of any of this brawl was Tyler Austin keeping his dip in his mouth throughout the whole fight. No it was not blood Jared.

Anyways, once things settled down the Yankees bullpen danced around a few dicey innings including a shaky 9th, but ended up securing the victory and evening up this series at one a piece. This was a huge gut-check victory for the Yankees and one that certainly will bring them together as a team moving forward. The rivalry is 100% back and we’ve got ourselves a good old fashioned rubber match tomorrow night with Sonny Gray facing Rick Porcello. If you’re a Yanks fan or Sox fans reading this, we can all agree this is going to be a whole lot of fun this summer if this is happening on April 11th. I fucking love baseball.

P.S. The biggest coward in the world is Christian Vazquez, who ran into this brawl with his mask still on. What a pussy.