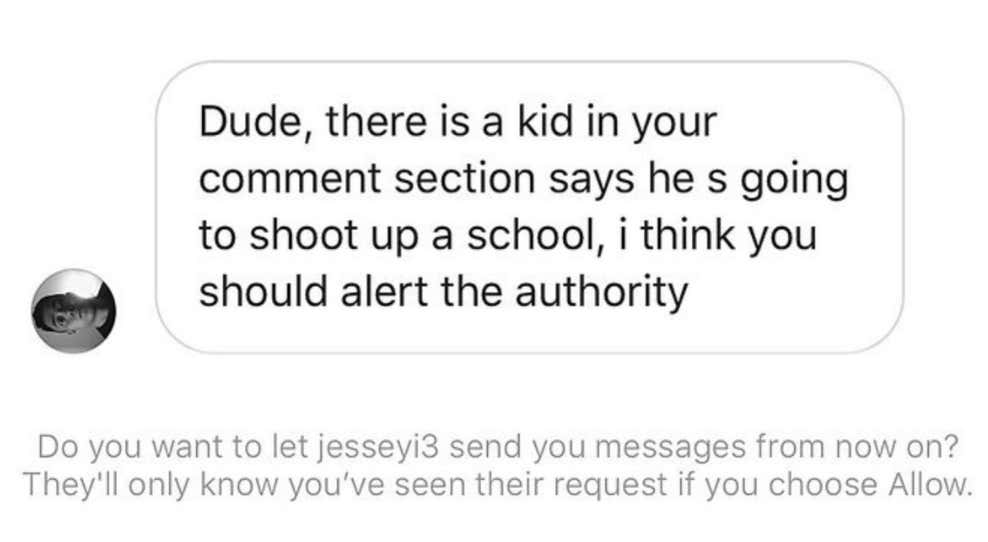 (NYT) – The New England Patriots receiver Julian Edelman was in Texas visiting his former teammate Danny Amendola late last month when he received a direct message on his Instagram account: “Dude, there is a kid in your comment section says he s going to shoot up a school, i think you should alert the authority.”

Edelman instantly thought of the mass shooting about five weeks earlier in Parkland, Fla., in which 17 people were killed. “With the emotions of what happened, and I have a kid now, I said, holy Toledo, what is going on?” Edelman said in an interview this week.

He quickly notified his assistant in Boston, Shannen Moen, who looked through the hundreds of comments that followed Edelman’s most recent post on Instagram. She found the alarming message: “I’m going to shoot my school up watch the news.”

Moen called 911, and a police officer soon arrived. The officer saw the screen shot, then called her chief, who sent two detectives to Moen’s house. The detectives collected some information about the person who posted the threat.

Seriously though, thank goodness this was Edelman because there are so many athletes out there who never would have seen this DM. Hell, I wouldn’t have and I’m a fucking nobody. But a fella like Edelman? A guy who might be taking the occasional glance looking to see if a lovely lady is saying sup? Well then we’re in a position to stop something extraordinarily bad from happening. Slide into David Andrews or Tom Brady’s DMs and you’ll probably be met with silence, slide into Jules’ and that shit is getting checked out.