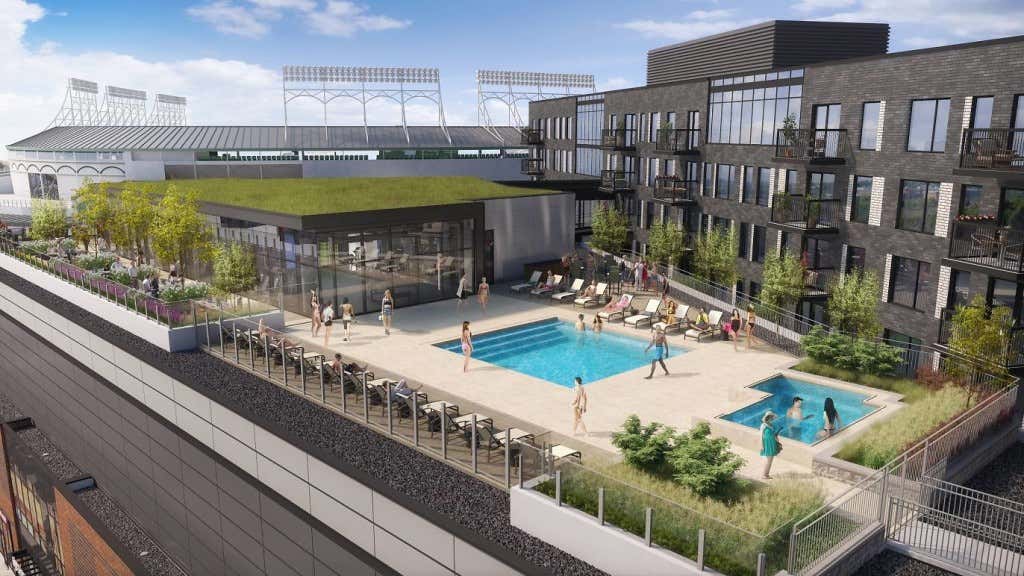 (Time Out Chicago) – Time Here in Chicago, rooftop season isn’t a lengthy affair, but there’s no denying that we make the most of the precious time we get outside. A new mixed-use development at Addison and Clark streets is hoping to capitalize on that with an amenity most Chicagoans wouldn’t turn down: a rooftop pool. Situated directly across the street from Wrigley Field, the Residences at Addison & Clark will encompass 148 luxury apartments that will all have access to the summertime perk. And no, you can’t see into the stadium from the pool, in case you were wondering.

I’m not a big pool guy, and if historical Yabo t-shirt orders are any indication, neither are you. But by virtue of being a big Chicago guy, I’m a big rooftop guy.* So this is a win for me and it should be a win for you too.

Wrigley rooftops have been on trial in the court of public opinion since Tom Ricketts bought the team. No one wants to go anywhere NEAR rooftops right now. Remember 2008? Probably not but it was a big year two things: subprime mortgages in “emerging” suburban communities and Wrigley rooftops. Every Groupon intern and their 4 lakeview roommates were lining the streets with rooftop lanyards and Mark DeRosa shirseys. Miami (OHIO) frat boy heaven. It was a special time for very few.

But that was 10 years ago. And since then no one and I mean no one wants to go to the rooftops. It just sucks. Go to the bar before a game and your friends ask where you’re sitting. Oh I’m actually doing a rooftop. Doing a rooftop. Just listen to this poor fucking guy. But we should meet up after the game. Sure thing buddy. Bring your coworkers.

This is a different. This is hope. This is a chance that maybe there could be some dynamite fucking parties existing 5 stories above the family friendly corporate america atmosphere brewing at ground level. A place where illicit drugs, sex, sunshine and baseball mix. They called that the San Diego Padres clubhouse in the 80’s but now they’re calling it a 148 unit, mixed-use development at Clark and Addison. And I so desperately need a piece of this action.