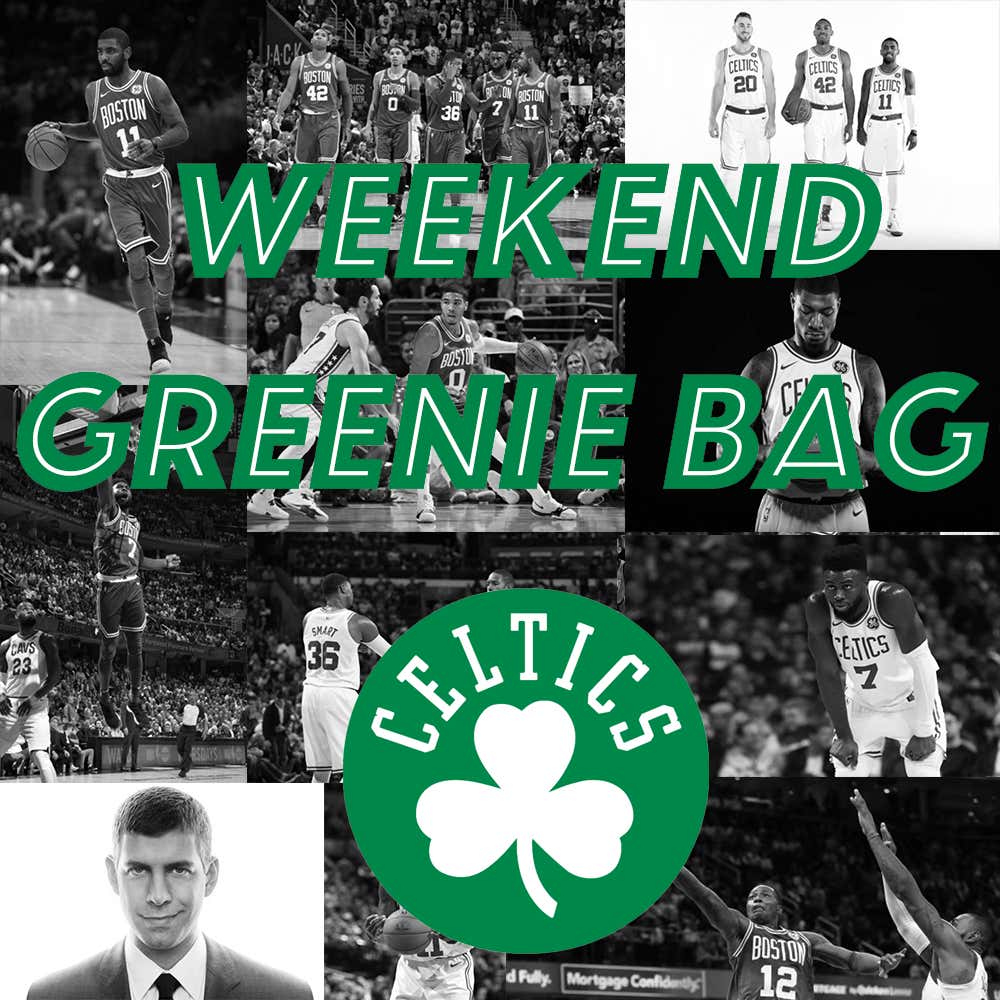 Hello and welcome back to the Weekend Greenie Bag. With it being a lazy Sunday and there still being a few more hours until the Celts tip off, I like to check in and see what’s on the minds of the stoolies as a way to help kill that time. Maybe you’re reading this at the half of the college game and are looking for a way to help deal with your Sunday hangover. Whatever the case may be, know that you too can be a part of this weekly mailbag whenever you want, just tweet me any thought/take you have with #GreenieBag or you can email greenieceltsbag@gmail.com. As you can expect, a certain topic seemed to be on a lot of people’s mind. Let’s see what they had to say….

I have this feeling that after the players tribune video came out, Hayward is going to come out with a players tribune article pretty soon talking about his recovery. At the end there’s gonna be the bombshell. “I’m back”. Just want you to have it in writing when it happens. – Keaton

Keaton I have no issue with what you said other than the fact that if this were to happen, given that a certain blogger’s DMs are open and he has access to a certain sports website, I personally would have chosen a different outlet.

Either way, we all know this is how it’s going to be made public. Forget the boring press release from the team. I’m fully ready for like a 1 minute video that starts with the play he got hurt, then gives us clips of every step of his recovery, and then some dramatic announcement that he’s back*. It’s 2018 let’s get creative. I want to be entertained while I cry tears of joy.

What’s up Greenie I love your stuff and always look forward to the blogs after I miss a Cs game here and there.

With the Kyrie injury, I admit the second opinion is not a great sign but with what Danny and Brad have said everything seems fine, no? Just a little soreness that it seemed like he’s been playing with. Ainge did say he will prob need surgery but not for another couple years possibly.

And with Horford, I’m not one of those idiots that say Cs shouldn’t have given him a max or that they should trade him, I just think his play can be a little underwhelming sometimes. If you take the contract completely out of it, he just doesnt always step up as of late. With Hayward out it seems like he could’ve really cemented his role in the offense and theres too many games where he doesnt do enough offensively it feels like. With that being said, he was huge in the playoffs last year and I expect the same this year, he can just be a little frustrating.

Sorry for the super long email just wanted to vent some Cs problems to someone who understands the game. Id appreciate any response!- Jake

People forget, this email right here is exactly why I started this mailbag in the first place. Being a fan of this team is a wild ride emotionally, and sometimes you just need a place to get it all out. For me that was a blog that then turned into a slightly bigger blog, so never apologize Jake, in fact, I encourage you to do this more often. It’s very cathartic.

Since you wrote this email some things have changed. We know that Kyrie is only out 3-6 weeks, and Horford did play much better against POR than he has of late. I think it’s important to remember that at this point with so many guys out, the Celtics are going to ride whatever hot hand there is on any given night. Would it be sweet if one of those nights of Horford? Sure, but that win against POR was more than enough for me. Make the most of his opportunities and come up in big moments in crunch time. I don’t care if that was 11 points or 25 points, him showing up in the big moment is what I care about. Now I just want to see it keep happening.

First off, great fucking win in OKC. Love it. Now to the real stuff. What is with Brad Stevens apparent love affair with Abdel Nader, the worst player on the roster. Guy is playing like 20+ minutes a game and makes zero positive impact the entire time. Thinks he’s Carmelo Anthony from 2010 on offense and his defense is barely good enough to cover me (former jv highschool 6th man). I’d love an explanation if you can concoct one for me. Keep doing great with the blogs. – Bryan

The easy answer is he has a pulse at a time when the Celtics desperately needed bodies. The real question is what we’ll see from Nader moving forward, now with Jaylen back and Yabu showing to be the best two way talent since Lebron. I think we can all agree that his 20+ minutes a night for the most part have been a complete disaster, but I don’t really blame him. I don’t think Nader ever expected to be relied upon like he has been for the last few weeks.

either way the answer is less Nader and more of everyone else.

I know you’re having a tough day like the rest of us. This news about Kyrie’s was a real kick in the dick. I’m reading the blog you just threw up and you listed Kyrie’s games played and how it doesn’t look all that encouraging. Well I didn’t think so either, BUT for shits and gigs I looked up CP3’s games played through his first 8 seasons and he wasn’t exactly a picture of health himself.

If you look at the lock out season as a wash and don’t include it for either of them, CP really only played another 1/3 of a season (35 games) more than Kyrie had in his first 7 seasons. So while, sure those numbers so far for Kyrie aren’t encouraging, it’s not like we are closing the book on the guy. Paul while banged up with various injuries for a lot of his career was always considered the best PG in the league. If we were in the Pelicans/Hornets shoes in the early CP years we’d still be shelling out to give him the max, so why be skiddish with Kyrie? I not even sure if this argument makes sense or if I’m just grasping at straws here, but that makes me feel a little better. Kind of. Hang in there Greenie. – Ryan

I don’t think we’re at the point of closing the book on Kyrie and his health. Far from it. I just think it’s something that needs to be seriously considered as we move forward. It makes me worried not for the immediate future, but how he looks towards the end of his deal. I think it’s fair to be worried about signing him to an extension, and then living in a world where you don’t get to have him for the playoffs. The Celts have made their decision that he’s their franchise player, and I don’t know how his history doesn’t make you at least a little nervous. If this is happening at 26, what does 28/29 look like?

The good news is it doesn’t sound serious, but that was just this time. I just don’t love that I’ll now be dealing with this feeling for the rest of Kyrie’s Celtic career.

Greenie – Loved your work all year, can’t believe you’re not salaried and full time at BSS yet!

I have a two part question. First, who do we keep long term: Marcus Smart or Scary Terry? I think Marcus is going to be more affordable and if we can bring him back at ~$10MM Danny has to move forward with him instead of Rozier. Terry has been great but Brad has a proven track record with finding scoring guards (Jordan Crawford). Given what will have to be paid to Kyrie, Jaylen and eventually Tatum, what Marcus brings feels so much more difficult to replace on this team than Rozier who presumably will command something greater than or equal to Smarts deal.

Second part: If we resign Smart this offseason, do you trade one of Smart or Rozier next year, or simply acknowledge the likelihood of losing Rozier for nothing in RFA and go for it all? Thanks for everything you do! – Chris

If I have to pick one, I keep Smart as well. For me, the offensive difference isn’t high enough for me to warrant losing Smart. I think Rozier is going to be really good, but given this team’s roster and it’s needs, Smart checks more boxes. But here’s the thing. I’m no cap expert, but my preferred route is that Ainge just extend to keep them both. He has Bird rights so he can go as high as he needs to in order to keep everyone. Ownership has been public about paying the tax as long as you can compete for a title, and I think this team is closer to doing that for years to come with both of these guys as opposed to just one of them. Especially with Kyrie’s injury history.

That’s why I’m crossing my fingers that Smart comes in under something crazy, and Ainge finds a way to work out an early extension with Rozier before he hits RFA. I know Terry will eventually want to start, but I also know him and Ainge have something special. In an ideal world, that all happens.

And that’ll do it. As always thanks to those who wrote in, see you all next week.

Have a great rest of your lazy Sunday!