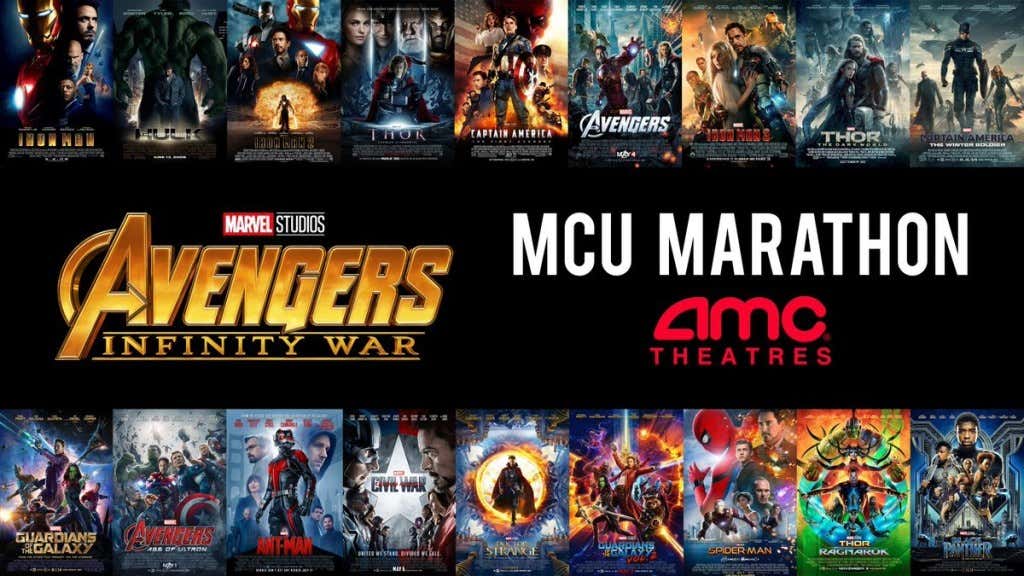 Comicbook.com- Are you ready to watch the next installment of the Marvel Cinematic Universe? In just over a month, Avengers: Infinity War will make its debut, and the long-awaited film is poised to be the year’s biggest cinematic event. But if you are not all caught up with the MCU, don’t fret!

Just head over to AMC Theaters and block out a couple days on your calendar. The company is holding a massive MCU marathon before the third Avengers film arrives. If you check out AMC’s website, you will see a page of its huge Avengers: Infinity War marathon. The dates for the event have not been named, and its price is missing too. What is available is its duration, and AMC says the marathon will run 31 hours. Yes, that nearly 1.5 days of superhero goodness.

Look, I love going to the movie theater. Out of everything I miss the most from my life before I became a parent, going to the movies is easily number 3 on my list behind sleeping 8 hours and having friends. Nothing beats the rush of going to the theater, getting hit in the face with the smell of fresh popcorn, sitting through a few awesome previews before they start to drag, forgetting what movie you are actually there to see, and then being reminded once it actually starts.

But you have to be an absolute savage to sit through a 31-hour movie marathon, no matter how good the Marvel movies have been. Going to the movies is fun, it is definitely one of those things that is good in small increments. Sitting in a movie seat, peeling your feet off of the sticky floor, or breathing the movie theater air is one of those things that should only be done for like 3 hours at a time, max. Once you hit the other side of that 180 minute mark, your body starts to break down like a 15 year NFL vet and breathing in 31 hours worth of stale air can’t be good for your lungs. I would say that sitting the dark for 1.5 days and staring at a screen can’t be good for your health either. But lets be honest. It’s 2018. We are all doing that shit every minute that we aren’t sleeping anyway.

The capper to all this is the food though. If you are in a movie theater, you know you are going to hammer the fuck out of some popcorn. You may dabble in some candy for fake “real” food that the theaters sell like hot dogs and pizza. But that popcorn smell when you walk in the theater is Pavlov’s bell for humans. It doesn’t matter if you haven’t eaten yet that day and know a large tub of corn will give you a massive case of Popcorn Belly. You are going to eat it. Multiply that by roughly 15 for this marathon since that’s the amount of movies you are sitting through, and you will likely be more popcorn than man by the time you leave the theater. Buckets on buckets on buckets. While I love this marathon in theory, in execution it has to be a real nightmare for the audience’s digestive systems as well as the short term and long term smell of whatever theater gets tabbed to host a bunch of people that look like Comic Book Guy for 31 hours. And if you go to the 31 hour marathon before the third Avengers movie, that means you definitely have to go to the 44 hour marathon before the fourth Avengers movie, right? No fucking thanks.

*Thinks about it for a minute*

Ahhh who am I fucking kidding? Someone from Barstool is definitely going to do this and make a video from it. Probably Robbie Fox, since he’s a movie nut and slept overnight on a concrete floor just to watch the same Star Wars trailer on a screen that the rest of us watched on a computer/phone from the comfort of our own homes or cubes. Knowing Robbie, he will likely cry at some point during every single movie and twice during the Captain America ones because those always seem to be a little extra emotional. Have you ever seen a blogger get hospitalized for dehydration because he cried too much during a 31-hour movie marathon? Nope? Well get ready, because I’m pretty sure that Bob Fox video is coming out in April, whether he knows it or not.