Source - Justin Timberlake’s bringing shotskis back to arena concerts — just ask the folks in Toronto who boozed with the pop star to celebrate the first stop of his new tour.

JT played Tuesday night at the Air Canada Centre to kick off his “Man of the Woods” tour, and by the end … he and his crew needed a drink.

Timberlake played bartender and handed out shots to everyone in his band, even gifting some to a few fans down below. He toasted the crowd, a baby on the way (not his) … and Toronto’s very own “motherf***ing Drake.”

I’ve always been on the fence when it comes to JT. Something about him rubs me the wrong way. It’s like he knows he’s talented and is smug about it. Ever since I saw him try not to smile while holding a baby at that golf tournament I’ve hated him. Although if we’re being honest, my hatred of JT dates back to 2013 when I got punched in the face at one of his concerts.  I accidentally spilled beer on a girl twice so she turned around and cracked me in the nose. It happened right after this picture was taken. You can see the beer about to spill. If I had only taken one more sip it never would’ve happened. But it’s fine, I’m totally over it ha-ha. 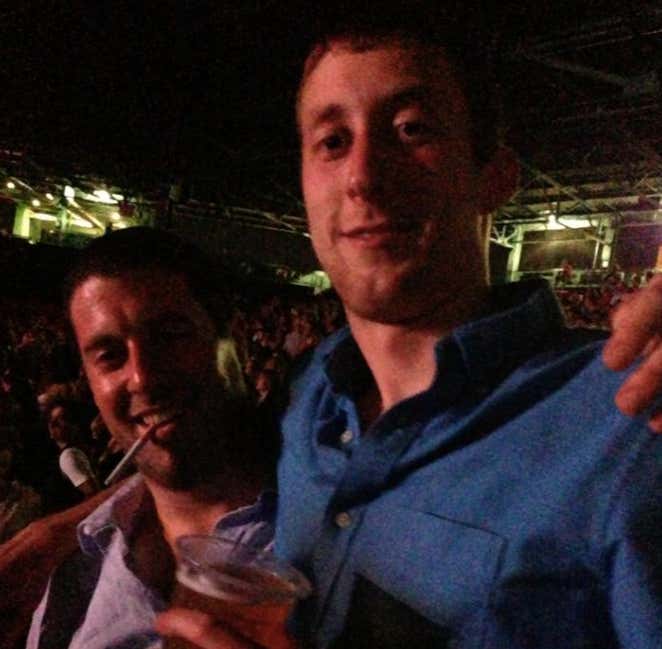 Despite all that, Timberlake won me back with this move. Any time a rock star parties like a rock star I’m on their team. It’s so rare to see someone as famous as him act like an actual human that when they do it’s impossible not to be on their side. I’d love to see this usher in some sort of bad-boy party era for Justin. If I’m him I’m going full bad ass. I’m kicking off every tour with shots for the crowd, maybe some medical marijuana, mix in a few swear words here and there. Really going wild. Besides, he kind of has to considering the precedent has been set.  You can’t hand out shots at one concert and not the others.

I wasn’t really planning on going to another one of his shows but now I may have to. Just as long as they hand out drinks and that girl isn’t there. I’d hate to get beat up to the tune of Sexy Back…again.