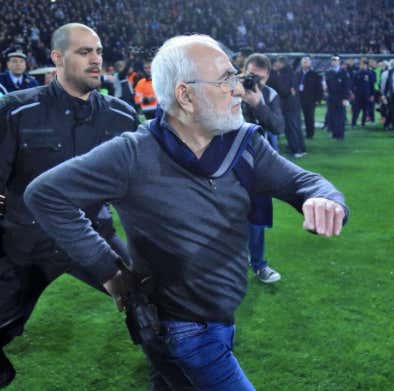 Source –  Ivan Savvidis, the owner of the Greek soccer team PAOK, was not at all happy that his team’s 89th-minute goal was disallowed by an offside call Sunday against AEK Athens. We know this not because he railed to the media or demanded an explanation from league officials, as most unhappy team owners would, but rather because he decided to twice storm the field while armed with a holstered handgun and surrounded by bodyguards.

AEK Coach Manolo Jimenez told Spanish radio that Savvidis approached referee Giorgos Kominis, showed him his gun and said “your career as a referee has ended,” Marca reports. AEK’s players left the field over concerns for their safety and the match was abandoned hours later.

Adding to the confusion, the Associated Press reports that Kominis may have actually allowed the goal.

On Monday, Ekathimerini.com reported that Greek prosecutors have issued an arrest warrant for Savvidis over his pitch invasion alone, not the fact that he was armed during it. However, firearms reportedly are prohibited in Greek soccer stadiums, even in the case of on-duty police officers.

FIFA released a statement Monday saying any disciplinary action will be taken by the Greek football association. That country’s sports minister announced Monday that it has suspended play for the entire Greek league as it investigates the incident.

We’re getting there. Slowly but surely soccer is becoming more exciting. A few weeks ago Will Ferrell suggested releasing a pack of wild coyotes onto the field during the second half to spice things up, but unfortunately that never happened. I wish it had- a man vs beast, gladiator-style soccer match would’ve been much easier to watch than a regular game. Players running for their lives out of fear of being eaten alive. Ratings city. Oh well.  Lucky for us, Greek soccer coach and resident psychopath Ivan Savvidis added a little excitement to the game when he pulled a GUN on an official after his team’s goal was called back. Which is apparently a big no-no but not as big a no-no as storming onto the field.

Say what you want about soccer fans but don’t say they aren’t passionate. It almost makes me want to watch a game. Almost.   It would have to take an actual murder for me to watch a game and even then, I’d probably DVR it and fast forward to the kill shots. The video of him storming on the field is fantastic. Such an angry little man.

I wonder if anyone told him the reason people were uneasy was because of the Neanderthal with the neck tattoo standing directly behind him. 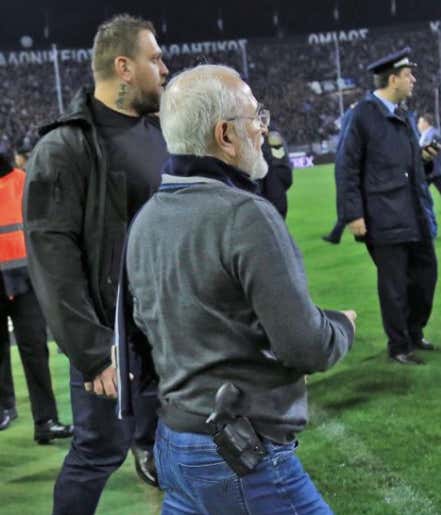 Can you imagine if something like this happened in the United States? Udonis Haslem gets called for goaltending so Erik Spoelstra pulls a gun on the ref? Van Gundy runs on the court with a revolver after a questionable Blake foul? It would be national news. This happens in a soccer game and it’s nothing more than a blip on my twitter moments. Incredible. Thank God no one got hurt.