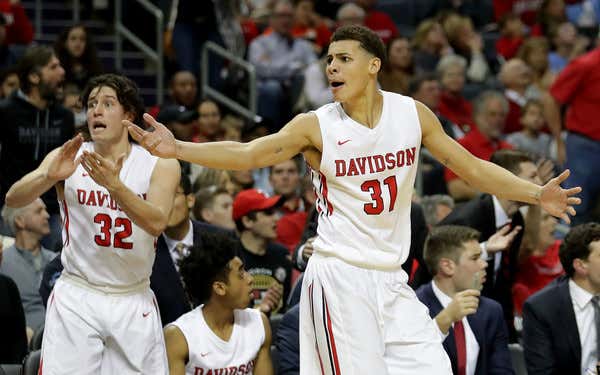 Man, I tried telling you guys about this Davidson team today. They’ve been playing so damn well and have a legit 3-headed monster in Jon Axel Gudmuddson, Peyton Aldridge and Kellan Grady. They all showed out as they were able to hold on to a win over URI in the A-10 title game. Davidson just continues to run that motion offense that is predicated on cuts and reading the defense before deciding what screen to set. It’s my second favorite offense to watch in the country behind Beilein’s 2-guard offense.

But, what this really means is one more team who thought they might have been in the NCAA Tournament is out. Davidson wasn’t going to get an at-large bid and winning this game pushes someone off the bubble. This is now the second time this happened this weekend with San Diego State beating Nevada earlier in the week. This likely isn’t ideal for a team like Louisville, Texas, Oklahoma, Oklahoma State or Arizona State.

Also, URI fans should be a bit worried. Now, don’t get me wrong, URI will be in the NCAA Tournament, but a team that had thoughts of being a top-4 seed is likely going to end up on the 8 seed line. This is a team that was dominating A-10 play before losing by 30 to St. Joe’s at home and followed it up with 2 losses to Davidson in two weeks.

Kentucky is starting to get two go-to guys in Kevin Knox and Shai Gilgeous-Alexander. Going with that is Calipari’s move to the small ball style of play. He rides who is hot, but often times he’s using a rotation of SGA/Green/Knox/Diallo/Washington/Gabriel/Vanderbilt. That lets them switch everything defensively, spread out and attack offensively. I talked about what they are doing offensively, putting Knox in flex screens, baseline screens and the hi-lo set with the box to box screen.