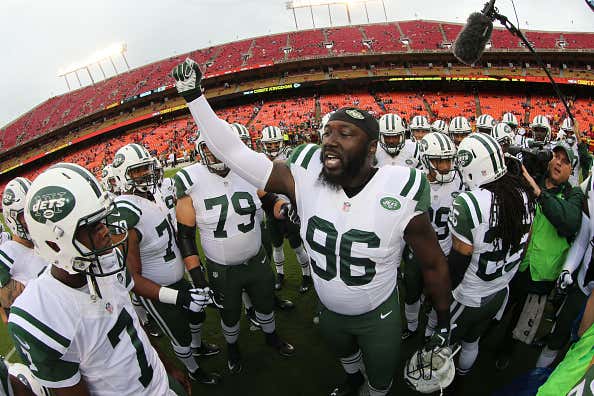 Its altogether completely stunning yet completely obvious how poorly this all played out for the Jets and Mo Wilkerson. It seems like just yesterday Mo Wilk was anchoring that Sons Of Anarchy D-Line and the future looked so bright on the defensive side of things. Now Sheldon Richardson is in Seattle, Snacks is wearing blue in the Meadowlands, and Mo Wilk is gone. What looked like it had such promise to be a marauding unit never panned out even a little bit. Obviously with salary cap issues and the Jets just being a general shitshow, there was really no chance to pay all those guys and keep everyone in place and happy. After Snacks walked for big money the Jets were then forced to decide between Sheldon and Mo, and they went with Mo. Which at the time seemed smart. Boss Hogg was becoming more and more of a problem with his arrests and his off the field comments and issues, and Wilkerson seemed like the stud who was just gonna be quiet and do his job. Out of those three, he seemed like the safest bet and worth all the money.

And then he got his big contract and his guaranteed money and he just mailed it the fuck in. Showed up to camp a bagillion pounds overweight and blatantly just stopped trying. I mean it was astounding how lazy that guy was once he got his money. He’s not the first guy to give up after getting paid and he wont be the last…but he was one of the more shocking cases. Not the type of player you expected it from.  Calling him lazy was an insult to the word lazy. He just didnt give a FUCK. You can watch game film of this dude acting like he was at involuntary OTAs while in the middle of a divisional game. The laziness and the level of indifference was staggering.

Which is how you end up being cut. Its crazy that when it was all said and done he wasnt even tradeable. Just totally worthless to this franchise. When youre fat, injured, lazy, a malcontent and you have a big contract its basically Jets Bingo. Thats the winning combo! And by winning I absolutely mean losing!

Again there was no way you could ever have all three of those guys pan out, keep all of them, and pay al of them. But, to be here just a few years later with none of them and nothing to show for it? Well thats just about the Jetsiest thing ever.

PS – When he inevitably fills the Patriots need for a pass rush and returns to his old form in New England I’ll have no choice but to kill myself. Cant watch that happen again.