This guy Floyd Mayweather. He’s so hatable, but at the same time, so endearing. He will bet mid 6 figs on a game and post it all over Instagram, but he can’t even read. He’ll buy himself a new plane:

But then will be listening to an iPod from 2009 while on it. 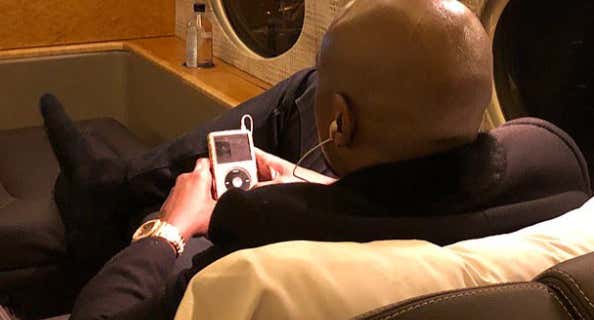 He doesn’t even have wireless earbuds?!?!? Crying face emojis everywhere. Next thing you know he’ll be eating bologna and mayonnaise sandwiches for lunch.

What this means is Floyd is officially an old person. Like, he thinks he’s taking this baller picture on his jet, and now all anyone cares about is how he is using an iPod and wearing $29.99 ear buds from Walmart.  It’s the classic case of an old person who just doesn’t understand new technology. He can buy all the planes, all the Rolls Royces he wants, but he’s still stuck in time 10 years ago. I guarantee it, Floyd still buys DVDs. He has no idea how to hook it up the player, but he still watches DVDs. Old people, just the cutest.

PS: Still one of the best videos ever made.