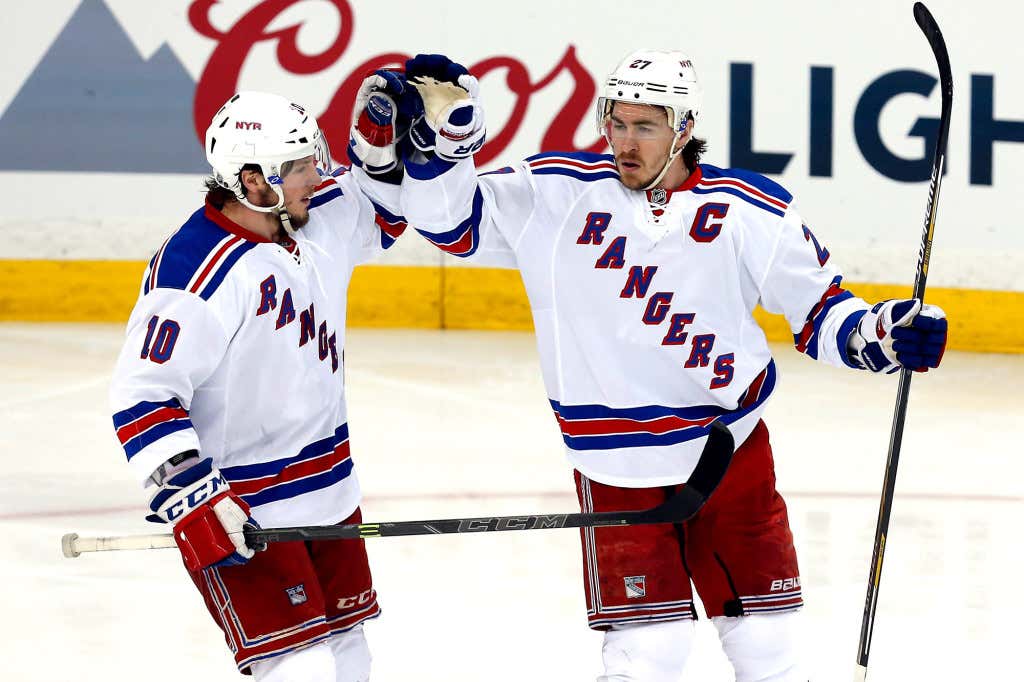 So I’ve taken some time to do a little homework on the trade that sent captain Ryan McDonagh & JT Miller to the Rangers South for Vladislav Namestnikov, prospects Libor Hajek & Brett Howden, a 2018 first-rounder and a conditional 2019 second-rounder (turns to a first if the Bolts win one of the next two Cups). I’m simply never going to be convinced Gorton didn’t have the leverage to force Yzerman to pony up one of his prized possessions – whether it be Sergachev, Point or even Callen Foote if he understandably wanted to keep the big club as intact as possible. Mac was unquestionably the biggest deadline catch. Neither were expiring assets. The Rangers could’ve waited for the market to open up more this summer and recouped a very similar haul trading them each separately if they weren’t going to get an elite kid now. The only reason this trigger should’ve been pulled is if it was an offer that blew them away. This doesn’t make the grade.

Don’t get me wrong – big picture, everything the Blueshirts collected over the past couple days is worth getting excited about. They’ve now got 7 picks in the first 3 rounds & potentially 5 in the first 50 overall (ballpark: 7, 27, 30, 38, 50). If you want to project the talent level available around those picks, look no further than the kids NY traded for. Howden was picked 27th, Hajek 37th & Lindgren 49th in the 2016 draft. Their own first rounder is a slam-dunk top-10 pick and with a little bit of lottery luck could end up hitting the jackpot in Rasmus Dahlin. More realistically, it could still end up landing them some good old American sandpaper in Brady Tkachuk. Plus if we watch our former Rangers hoist the greatest trophy in sports, we’ll have 2 more first-rounders for 2019. This is exactly how you rebuild.

The kids coming over from Tampa Bay are no slouches. Defenseman Libor Hajek is yet another big-bodied, strong, mobile, high IQ, defensive-minded prospect in essentially the same mold as Ryan Lindgren & Igor Rykov who were recently added to the Rangers’ stable. None of them have top-notch offensive skills but all have a pretty high overall floor. Hajek did pile up 8 points in 8 WJC-20 games skating with fellow Ranger Filip Chytil for the Czech team & is the best bet of the bunch to grow into a top-pair pro. My only problem with him is he’s not Sergachev or Foote. How the Lightning held onto their top 2 defenders of the future is beyond me.

Perhaps the biggest impact of this return will come from the young C currently lighting it up in his final year of juniors. Howden has racked up 58 points in just 38 tilts after finishing last season with 81 in 58. He was also one of Canada’s best forwards at the WJC. Scouting reports tout him as a big, smart two-way center with definite top-6 potential. Howden could follow the same path as former Moose Jaw teammate Brayden Point did with the Bolts a couple years ago & skip the AHL altogether. There will be plenty of openings on the Rangers roster next year. The Blueshirts didn’t snag Point but maybe they got a bigger, younger version. Time will tell.

I’m most concerned about Namestnikov. The 25 year-old is under team control and his upcoming deal will certainly cost less than Miller – but what are we expecting here? His first two years produced an average of 31 points. This year he’s bumped to a 60-point pace thanks to skating alongside a pair of the league’s top-10 scorers (Kucherov & Stamkos). He won’t have anywhere near that luxury here. As part of a rebuild trying to establish chemistry among a lot of new young faces, will Namestnikov be the type of guy to make players around him better? He hasn’t proven he’s got that type of ability yet. I don’t know much about his two-way play but he wasn’t a part of Tampa’s PK which tells me it’s adequate at best. If he’s not a defensive asset then he’s gonna have to figure out a way to kick in significantly on the stat sheet without elite linemates. Vladi’s track record is brief but hasn’t shown me much reason for optimism.

So the Rangers now have all these picks, all these new prospects with an estimated $27M in cap space (before contracts for Hayes, Spooner, Namestnikov, Vesey & Skjei) and a potential lineup that, as of now, could look something like this:

That back end is a little scary but what else is new? Question marks virtually everywhere. Will these couple of pro months have Pionk & Gilmour ready for a full slate next year? Can Brendan Smith bounce back to an NHL-caliber defender? How much did Shattenkirk’s injury truly contribute to an awful debut on Broadway? And most importantly, is Brady Skjei ready to fill the shutdown skates left behind by his former captain? I think so. If I’m the Rangers I throw a contract at him similar to what McDonagh signed when he was 24. Lock Skjei up for $4M+ until he’s 30 before his price tag rises with big, big minutes on the horizon.

That’s right I said Kovalchuk. You know the Rangers still have to be the Rangers and I wouldn’t hate them adding Kovy for a smart price. This is the same guy who literally left the country just THREE YEARS into a 15-year contract so I don’t think he’s got much leverage for security. Offer up an incentive-laden 1 or 2-year deal & if he really wants to play in New York like he’s said, the veteran will earn his money while skating with a couple of young fellow Russians. Add a little star power for the fans and hope the rest of the team gels enough to compete for a wild card.

Will AV still be here to call the shots? I doubt it – but I don’t want the Rangers to hand him a pink slip simply for the hell of it. They need to find the right guy. He’s not it but neither is another crusty old coach that’s been in NHL rotation for years. I want the Rangers to find the next AHL/NCAA phenom. A younger new-school coach that might be able to get the best out of such a young roster immediately. Someone like a Sheldon Keefe who’s mentored all the kids now thriving in Toronto. Or maybe just get Sheldon Keefe. Just remember that a majority of fans who wanted Torts out were pretty damn happy when Vigneault was first brought on board. The next Rangers head coach might be the most crucial move this organization has to make, and there’s absolutely no reason to force it until they land a perfect match.