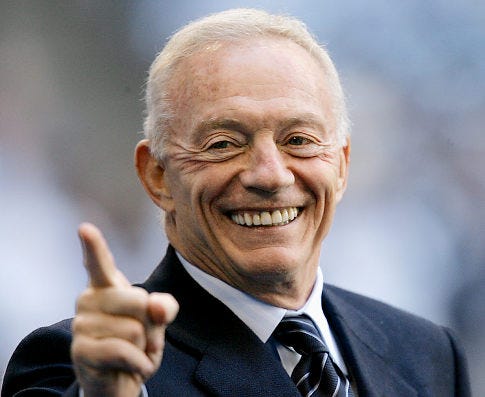 Source – With the support of many N.F.L. owners, Commissioner Roger Goodell is prepared to escalate his public feud with Jerry Jones, the owner of the Dallas Cowboys and long one of the most influential people in the league, by fining him millions of dollars for his efforts to derail negotiations to renew Goodell’s contract and for his outspoken defense of a star player who was suspended, according to five league officials with direct knowledge of the situation.

The punishment will be issued in the coming weeks by Goodell, who will declare that Jones’s actions were detrimental to the league, which rarely shows such acute signs of acrimony among owners and the commissioner’s office. Goodell has been reluctant to be seen as exacting retribution for the way Jones tried to sabotage his contract talks, but he was urged to bring the penalties by several owners who believed that Jones had crossed an unspoken boundary by threatening his colleagues. …

Jones was aware as early as August that only about 12 percent of Goodell’s compensation was guaranteed, and the rest would be based on whether he and the league met a variety of financial targets. Jones, however, continued to argue that Goodell was being overpaid. Though some owners were sympathetic to his stance, many of them backed away from supporting him when he threatened to sue the members of the compensation committee.

It’s hard to get too worked up about a fight that has no good guys in it and no side to root for. And to me, Roger Goodell vs. Jerry Jones is pretty much the Iran-Iraq War, where I’m just pinning my hopes on massive casualties on both sides.

But nevertheless, this is still a war that has moral lessons to teach us. Lessons about right and wrong. About hubris. About the dangers of absolute power. And, like so many great stories, about what happens to those who create a monster: Ultimately, they are destroyed by it.

That is absolutely what happened to Jones in this case. Jerruh had the authority to stop Goodell. When his own creation was terrorizing the villagers in places like New England, New Orleans and New England again, Jones could have put an end to it. But instead he encouraged the beast. And Goodell’s power only grew until he could no longer be controlled. By the time Jones tried to reign him in to save his own neck, it was too late. Goodell is King Joffrey and Jerry put the tyrant on the throne only to find his own head on the chopping block.

Believe me, I don’t celebrate this the way Jerruh would if it was someone else from some other franchise. Because I recognize the absolute power is still in the hands of a ferret-faced, sniveling little in-over-his-head manchild who can destroy anyone he wants with a single word. I just don’t feel sorry for the man who kept bringing pie when he could have poisoned his wine.

That decision already cost him his star running back, his season and now millions in treasure. Just because the punishment is unfair doesn’t mean he doesn’t deserve it.