So a quick breakdown of what Fortnite is for the old folks that don’t know. It’s pretty much the video game version of Hunger Games. 100 players are parachuted down to an island for a battle royale and the last man standing is the winner. You get one life and once you are dead, you either can watch the rest of the game or go back to the lobby and try again.

I don’t think I need to explain how the game has become a phenomenon. The reaction videos that have been on social media the last few months rival reactions after a classic sports moment and someone on Game of Thrones getting got. The groups of people celebrating like they won the championship game or screaming at each other like they are a Barstool employee during a grudge week is Must Watch shit. If you aren’t following Gametime on Twitter and Instagram, you are missing some primo content.

Which brings us to the #FortniteChallenge. The most twisted shit I have seen from the internet in years, which is saying something. Four years ago we had the #IceBucketChallenge, which was created to help others. Now we have challenges of people purposely trying to ruin other peoples’ lives with the #FortniteChallenge. Poot said it best in The Wire when talking about global warming.

I have never won a game of Fortnite where I wasn’t utterly carried by my teammates, but I’ll be damned if I didn’t say it wasn’t one of the highlights of my year. Seeing that glorious Victory Royale screen is about 1 mg less of dopamine than you get the first time you hold your kid.

For the record, this game was the only time I’ve accumulated a kill in my 30+ times playing Fortnite and it was only because my teammate let me execute an opponent that was bleeding out.

Which brings us to the reaction to this latest video. That poor son of a bitch saw the light at the end of the tunnel only to have his friend rip his still beating heart from his chest. Ruthless shit. I don’t know what I would do in a situation like that, but I imagine screaming like a banshee is one of the most likely outcomes. And how about the dude that pulled this move being named Bernie? Bernies don’t do shit like that. Mayyyybe a sneaky Bernard. Definitely a Kenard *wink wink Wire fans. But Bernies should be fun and mellow guys. This Bernie better watch his back, because his buddy will have his revenge, in this life or the next. Which is why I am calling for the #FortniteChallenge to end. We can’t have it anymore. There is too much of a chance of violence breaking out and friendships ending. Nope. Nosiree. #EndTheFortniteChallenge ASAP.

Now lets send it to my fellow Gametime compatriot Devlin for a few words. 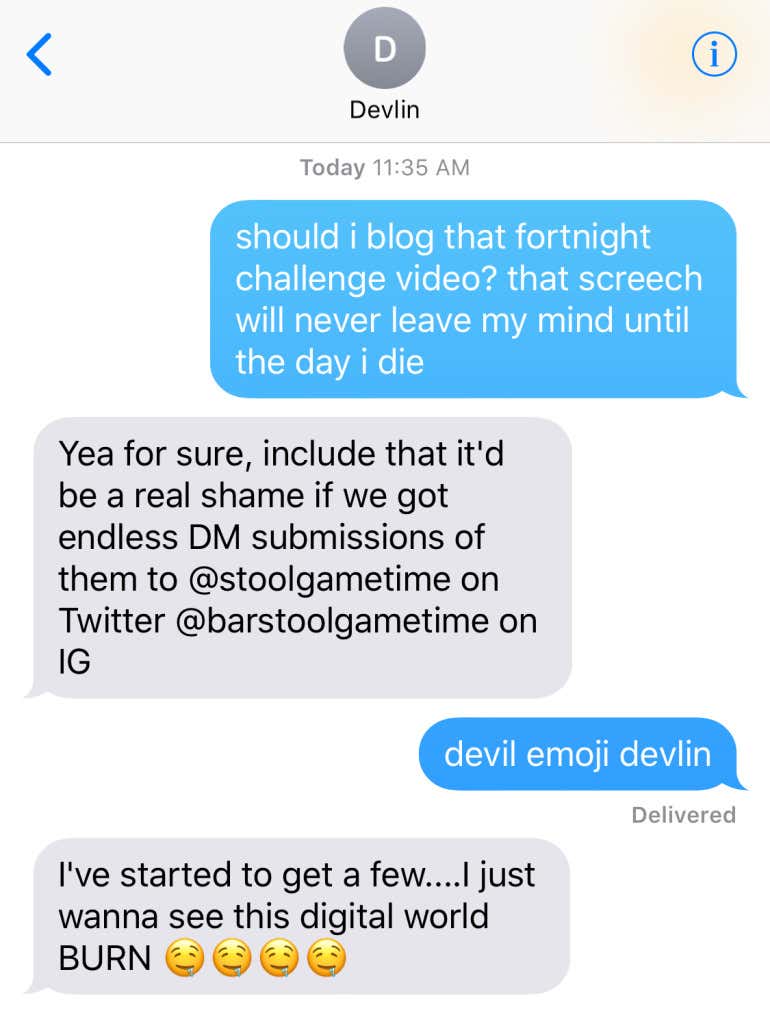 So I guess if you are going to do the #FortniteChallenge, make sure you record it all, from the time you turn off the system until the time your body is being loaded into the ambulance, and then send then send it to us.

Also, KFC announced it yesterday, but I figured I’d mention it again here.

Obviously this show won’t be replacing any Gametime coverage or Fortnite gameplay. No matter how bad I am at Fortnite, I still love it and we know that’s what the Stoolies and the world wants. We know KFC has a history of hating things that are almost universally beloved. I’m still upset at him for trashing The Godfather to be honest.

But for the old heads that want to go back and relive some of the classics from back in the day, we will have a new show running on our Twitch channel once I am able to crawl out of the piles of dirty diapers after Baby Clem 2 is born in a month or so.