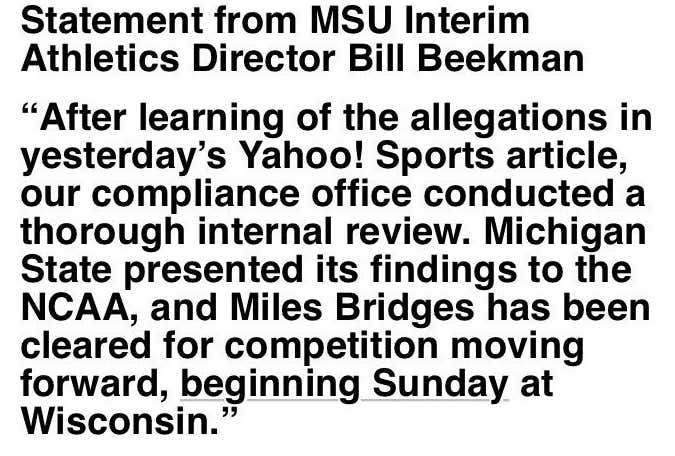 This was really the last one we were waiting to hear on. Miles Bridges – the biggest name that is currently still in the NCAA – was cleared today by the NCAA. Bridges of course had his name on the Yahoo report involving Christian Dawkins and his expense report.

This is really the growing trend with that report. Players are being cleared for a variety of reasons, but really the main reason is the NCAA doesn’t have anything to prove that these players or families are guilty of anything. I keep saying that, but it’s worth reiterating because of the entire situation. There simply aren’t any receipts. Again, I could put a similar expense report on my computer.

The other thing here is these schools should be playing these guys. Dare the NCAA to come after them. Dare them to go get hard evidence that some thing happened here. We saw the difference in UNC and Louisville. While those situations aren’t exactly the same, we saw Louisville work with the NCAA while UNC fought them from the get go, daring them to do all the work. Look at how the two results turned out. Throw in the fact that there are so many schools and names involved here, I’d be playing every single person named. Again, so far the only two players sitting out (we’re still waiting for Ayton news) is Eric Davis Jr., (Texas) and Malik Pope (San Diego State).