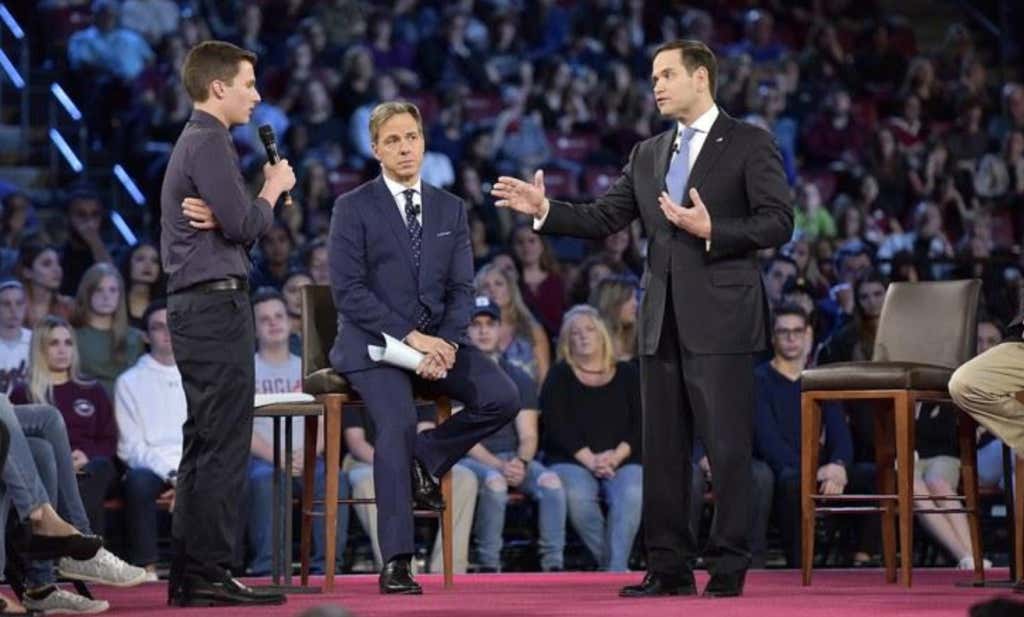 This past Wednesday night, Jake Tapper finally kicked his hangover from spending the evening of Super Bowl Sunday drunk on Broad Street throwing batteries at children in Pats jerseys, and hosted a CNN Town Hall concerning the tragic events in Parkland, Florida. Marco Rubio participated in the televised event, going well above and beyond his duties as a Senator by meeting with constituents and fielding questions on issues important to them.

The story of the night was students from Marjory Stoneman Douglas High School and the parents of victims questioning Senator Rubio about his positions on gun control issues and the support he has received from the NRA. Florida parents must be too busy wrestling alligators and running underground jenkem rings to teach their children any manners, because clearly the children there have never learned anything about respect. If they had, they would have respected the fact that Rubio graciously volunteered to take a break from begging Orlando area Toyota dealers for $5,400 checks to be a part of the town hall.

Instead, those in attendance were actually really mean to Rubio, calling him things like “pathetically weak,” — sentiments similarly echoed by the Tarkio College 1990 football team during Oklahoma drills — and asking totally irrelevant questions to the gun control debate like whether he would stop taking money from the NRA. Anyone who follows politics at all knows the real NRA we must be worried about is the National Restaurant Association and their unwillingness to prevent the rapid spread of KFC-Taco Bell hybrid restaurants.

If young people are to participate in politics, they should probably take a cue from those that have come before them and be a lot nicer to those who sacrifice everything for a $200,000 a year salary and a requirement to work almost a full 120 days of the year. The Civil Rights movement did not succeed because a legion of Jake Paul fanatics “dunked” on Strom Thurmond, it succeeded because protestors both young and old appealed to Lyndon Johnson’s ego by telling him what a giant hog he had and that if anyone could fix this issue, he could.

It is terribly ironic that these same young people who claim to hate President Donald J. Trump and everything he stands for, have adopted a move straight out of the President’s playbook. As he took a grilling from these students with all the resolve of a groom who got caught inside one of the bridesmaids the night before his wedding, Rubio looked eerily similar to his performances during the Republican debates as Donald Trump told him that he had a tiny little penis and sweated way too much. If our country is so divided that the only bipartisan issue we can get behind is making Marco Rubio feel really bad about himself, perhaps our country is just too far gone to be saved.