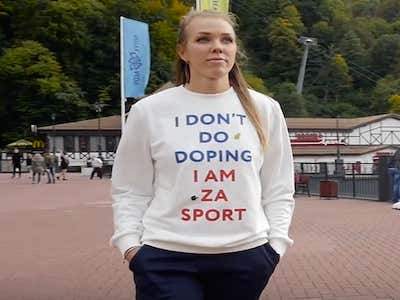 Washington Post- In an interview with the Associated Press earlier this month, Russian bobsled pilot Nadezhda Sergeeva said other Olympic athletes had warmed to her once she had been allowed to compete in this year’s PyeongChang Games by the International Olympic Committee. During the interview, she was wearing a shirt that read, “I don’t do doping.” On Friday, Russian bobsled officials confirmed to the AP that Sergeeva had failed a doping test.

According to the AP, Sergeeva tested positive Sunday for trimetazidine, a medication used for angina that has been banned because of its effects on metabolism. The president of the Russian Bobsled Federation said Sergeeva denies taking the substance and that her initial drug test at the Games came back clean. “She confirms she took no such medication, and the team confirms she was not issued any medication,” Alexander Zubkov told the AP. “Federation representatives at the Olympics” are starting to prepare a defense, he said.

“I can tell you that on the 13th it was clean, but on the 18th it gave a positive result for the heart medication,” he said.

Absolutely shocking news coming out of South Korea today. I don’t know who the Woj of the Olympics is, but he/she just dropped a nuke that would make the Rocket Man in the next country over jealous. If you can’t trust a Russian Olympian wearing a “I Don’t Do Doping” shirt, who can you really trust? Those Russians love cheating so much, they slandered the good name of the band O.A.R. Sad!

This story is also Exhibit A of why I could never be a drug tester or a jury member. No matter how ludicrous it would be for someone wearing that shirt to lie, I would always give them the benefit of the doubt just because it would be such a ballsy move to wear that shirt and then dope your dick or vagina off. There are two things I know about that woman based on that shirt: She doesn’t do doping and she is za sport. I imagine that doping test results have a bunch of weird numbers in it that makes the NBA Lottery rules easy to understand and they don’t give you an easy Pass/Fail like the fake Lie Detector on The Wire.

Because of that, I would give the athlete the benefit of the doubt every time. If she gets busted for steroids or changing the weight of the bobsled like John Candy did in Cool Runnings? GUILTY. But if a doping test came back positive, she would be innocent until proven guilty in my book. Unless she was Russian. And unless her name actually sounds like it is an illegal drug. Better luck next time, you Rooskies. See you in Beijing as O.A.R. again in 4 years.