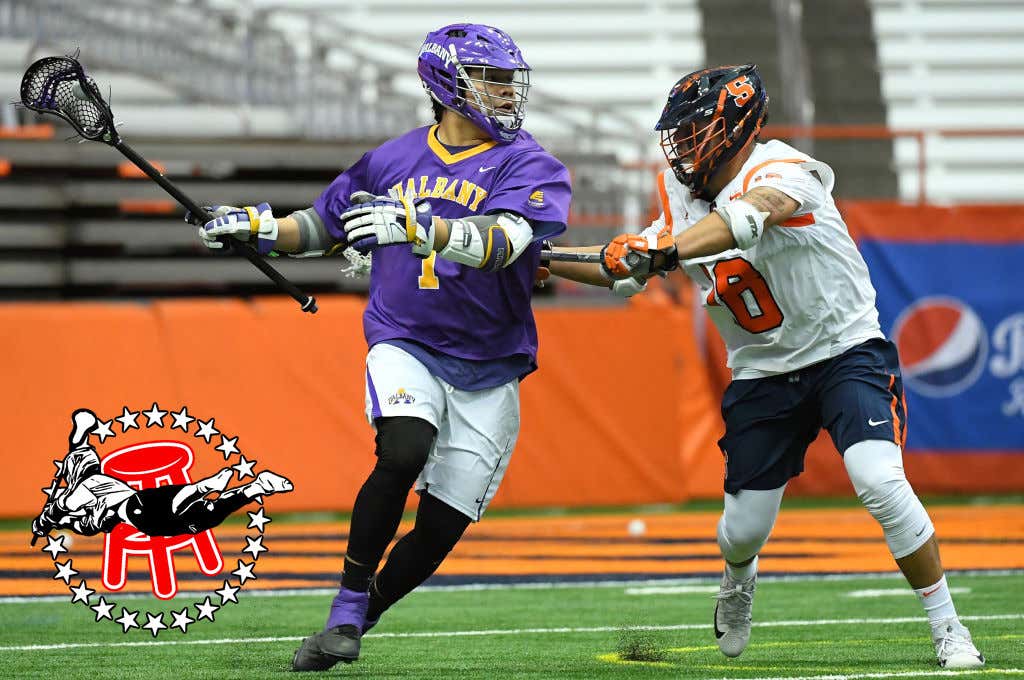 ***SUBSCRIBE/DOWNLOAD/LISTEN TO THE CREASE DIVE HERE***

We here in the lacrosse world have been talking about Tehoka Nanticoke for a few years now. We’ve seen him do ridiculous things on the field for the Iroquois Nationals at the U19 world games. He was the #1 recruit in the nation coming out of IMG Academy. And he even managed to break the internet early this year as a freshman playing fall ball. You might remember this goal.

Tehoka made his college debut last week in the Carrier Dome against Syracuse and holy hell did the kid live up to the hype and then some.

He had 5 goals on the day and the Dane Train rolled over Syracuse 15-3. Not a big deal or anything. Tehoka talked to us about his journey to becoming a Dane, what it’s like to be able to ball out as a freshman, we get a little inside scoop on why he’s no longer allowed to rock his box helmet and we get a surprise appearance from a member of the First Family of Albany.

So the Friday night ESPNU game tonight will be the UNC Tar Heels taking a trip to Homewood to play against Johns Hopkins. UNC is still undefeated on the season but they haven’t exactly been rolling over teams. They needed overtime to take down Furman two weeks ago and then last week they went to overtime against Lehigh. They’re still winning these games so you can’t knock them too hard. But they’re a suspect 3-0. Meanwhile, Hopkins started off the year beating the shit out of Towson but then got their own asses kicked against Loyola last weekend. This is just what we’ve come to know from the Johns Hopkins BlueJays over the last couple of seasons. They’re extremely inconsistent. They can look like the best team in the country one week and then look like they’ve never picked up a lacrosse stick the next.

With all of that being said, I think the fact that this is a premier game that will be broadcasted on ESPNU plus that fact that it’s Friday night under the lights at Homewood means we’ll see a ton of swagger out of Hopkins tonight. They may follow up big wins with big losses but it also goes the other way around.

Every time Syracuse and Army play against each other it turns into a bloodbath. The programs are so opposite from one another. You’ve got Army who basically wrote the book on fundamentals and then you’ve got Syracuse who love to add a little flair to their game. They’re two separate halves of the same whole, though. And every time they play it’s usually a 1-goal game. Last year Syracuse played in about a hundred 1-goal games and they seemed to win about 99 of them. But one that they didn’t come out from on top was against the Black Knights.

I think Army could very easily end up being one of the best teams in the nation this year. They’re 3-0 to start the season and I don’t see many losses on their schedule this year. If you want to beat Army then you have to get physical and you have to stay physical for all 4 quarters. What we saw out of that Syracuse defense last week is that they might not have it in them. However, they’ll obviously want to bounce back after getting embarrassed at home last weekend. So at the very least, we should expect this one to be tight because it always is.

Princeton didn’t exactly come out of the gates firing last weekend in their first game against Monmouth. They ended up getting the win but it took two overtimes to get it in. Now here’s the thing with the Ivy. They get a later start to the season than the majority of teams so those first games aren’t usually too indicative of how the rest of the season is going to go. So while Virginia looks great so far to start off the season at 3-0, I’d like to make sure everybody’s eyes are watching out for number 22 in black and orange on Saturday, Michael Sowers. I’ve said it before on the blog and I’ll say it at least 50 times again.

There is not a better dodger from X in the country than Sowers. There are very few players in the nation who are better feeders than him either. And I’m not talking about just college lacrosse. I’m talking in general. The way this kid is able to see the field is ridiculous and his brain is always 5 steps ahead of everybody else. Virginia has a ton of athletes on their team. Guys who can play both ways and that’ll definitely help them as we get deeper into the season and May rolls around. I just don’t know how much it’ll help them this weekend when they have to deal with 22 doing his thing.

So myself and Robby O will be at Franklin Field tomorrow afternoon to catch this game live. Obviously if recurring guest Justin Guterding is going to be playing in Philly, we’re going  to be there in person. So if anybody else is around the area and you’re looking for something to do tomorrow, we’ll see you at the game. We’ll also probably get to the Blarney Stone a couple of hours before the game to get a few pre-game cold ones in us.

As for the game itself? Well Duke didn’t just accidentally become the #1 team in the nation. They dominated Air Force, bullied High Point, smoked Jacksonville, and then last week had their first big test of the season against Denver and came out of that one on top 15-12. The game was back and forth all night but that offense is just so damn lethal that even Ethan Walker’s 5 goals and Baptiste at the faceoff X weren’t enough. Duke is an elite team. Penn just played another elite team earlier this week against Maryland and they took a tough 13-6 L. Having to follow that up against Duke is gonna be tough. But the good news for Penn is that the weather isn’t supposed to be great tomorrow so maybe that’ll help them keep things close. I still think Duke comes out on top but we’ve seen Penn take down Duke in February before. Granted it was 2013 but still.

Here’s the full slate of games for Saturday. Hobart vs Cornell obviously a huge rivalry game but neither of those teams are really moving the needle this year. 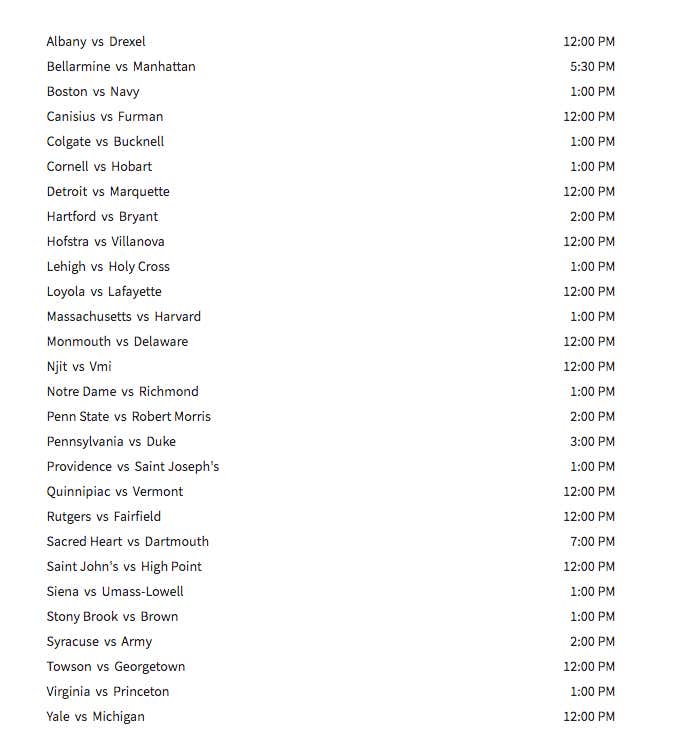 As always, shoutout to @LaxVegasLines on Twitter for getting these odds out every week. Make sure to throw them a follow. Their lines are always spot on.

I really hope some of you were able to find yourself a bookie who takes lax lines last week and went off of my picks because you were probably able to have yourself a nice Saturday night out at the bar after going 4-1. My picks last week were:

For this week’s picks, I’m riding with…

With my Mortal Lock of the Week being Denver -7 vs Cleveland State. Listen, I don’t want to do this to Cleveland St. But it’s just business. I have respect for those guys and what they’re doing with that program. But it’s a home game for Denver and it’s going to get out of hand by the end of the 1st half. Again, it’s just a business decision.