It’s Wednesday. Weekend is miles away. It’s cloudy, it’s rainy, it’s just plain nasty out there, and it’s glooooooooooooooooorious because:

Bless you soccer gods! All glory to Champions League!

Results from first six and schedule for the final couple first legs in the Round of 16: 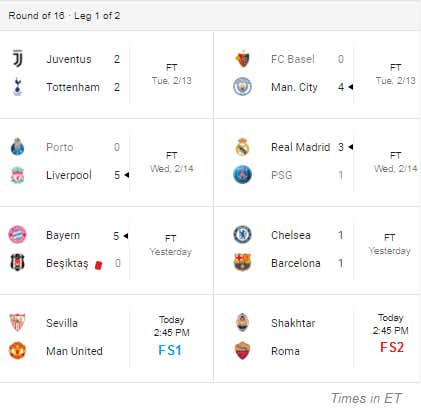 Two more left to be decided. Let’s take a peek under the hood…

Big storyline heading into this week’s game is the ongoing “dispute” involving Jozay Mourinho and Paul Pogba. The waters have been muddied by some sort of “illness” the French midfielder has rather conveniently come down with (causing him to miss the FA Cup game last weekend), but the key question – assuming Dear Leader has not lost every single last one of his marbles – is where Pogba will be positioned. Jozay has lately insisted on playing him in more of a defensive midfielder role, and predictably the offensive-minded Pogba has struggled mightily.

“So why is this such a big deal?” you might be wondering, and the answer boils down to the fact that United has not looked all that impressive since… well… August. They’ve got tons of talent: Pogba, Lexi, Lukaku, Rashford, Martial and even Lingard here and there – I mean, that’s a pretty damn deep talent pool. And yet compared to the likes of City or Liverpool (their two biggest rivals, it must be noted) they are about as fun to watch as a hemorrhoid removal. If the offense was clicking then the Jozay/Pogba thing would not be getting nearly as much attention. Alas, it isn’t, so it is (respectively).

An almost-as-interesting question though is whether Sevilla are any good and the answer is… well, unclear. They stuck with Liverpool in the UCL group stage and have impressive home-and-away wins over Atletico in the Copa del Rey recently. And yet they also lost to Alaves and gotten WHUPPED 1-5 by Eibar – who, admittedly, is decent this year – but still 1-5 is a big red flag (especially coming a few weeks after losing 0-5 to bunk ass Real Madrid). So the jury is out on Sevilla, but they are clearly capable of laying a massive egg here and there.

This is a game that Jozay would traditionally be content keeping the score low and close, so hard to imagine him going to with an overly offensive-minded XI (though absolutely no reason not to play Ander Herrera in the DM slot and let Pogba roam free and make some plays) and I wouldn’t expect a lot of fireworks. Sevilla will want to head back to Old Trafford with a lead and thus will try to put the pressure on, but the combination of United’s surprisingly solid defense and omnipresent threat of getting caught on a counter by some combination of Lexi/Martial/Rashford will prevent them from throwing the kitchen sink forward. Gimme a 1-1 draw.

When the haters accuse you of liking fun

Roma has been a manic-depressive lately, one month vacuuming and dusting and mopping every nook and cranny of the house after polishing the good silverware (just in case) for a third time… then spending the next few weeks refusing to get out of bed. The club ripped off an “impressive” seven-game winless streak that it finally snapped with a win against Verona earlier this month, then reeled off two more wins in a row, which has somehow kept them in third place in Serie A (a mile behind Napoli/Juve). As for what to expect, this not the wheeler-dealer team of years past with Mo Salah flying up the wings. They are defense first, defense second and defense third, and offense fourth – maybe. If we’re being honest, Roma may have finished out the season with 25 straight scoreless draws if the rumored sale of Edin Dzeko to Chelsea in January had come to fruition. But they didn’t, so they still have a striker on the roster, which is nice.

One wild card to keep in mind about Shakhtar is the Ukrainian league’s funky schedule means they have played just one competitive game since early December. Will rest >>>>> rust, or rust >>>>> rest? Who knows, but to the club’s credit it’s only game was a 5-0 spanking of something called Chornomorets Odesa… alas, that was Chornomorets Odesa and this is not. Roma to win 1-0. 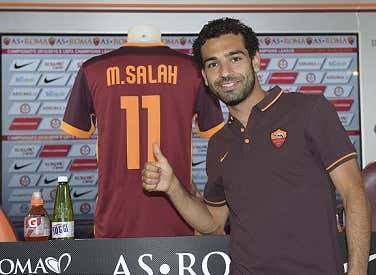 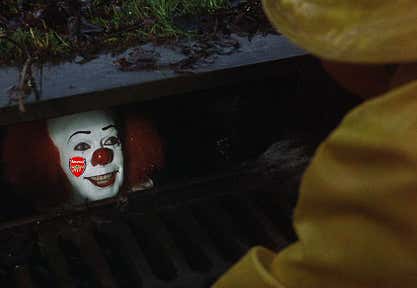 “We all float down here”

Look out for another blog on Friday ahead of a big, bigggggggggggg weekend of EPL 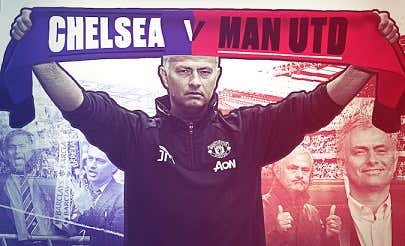 and the first trinket of the season will be handed out! Oh boy!!!!