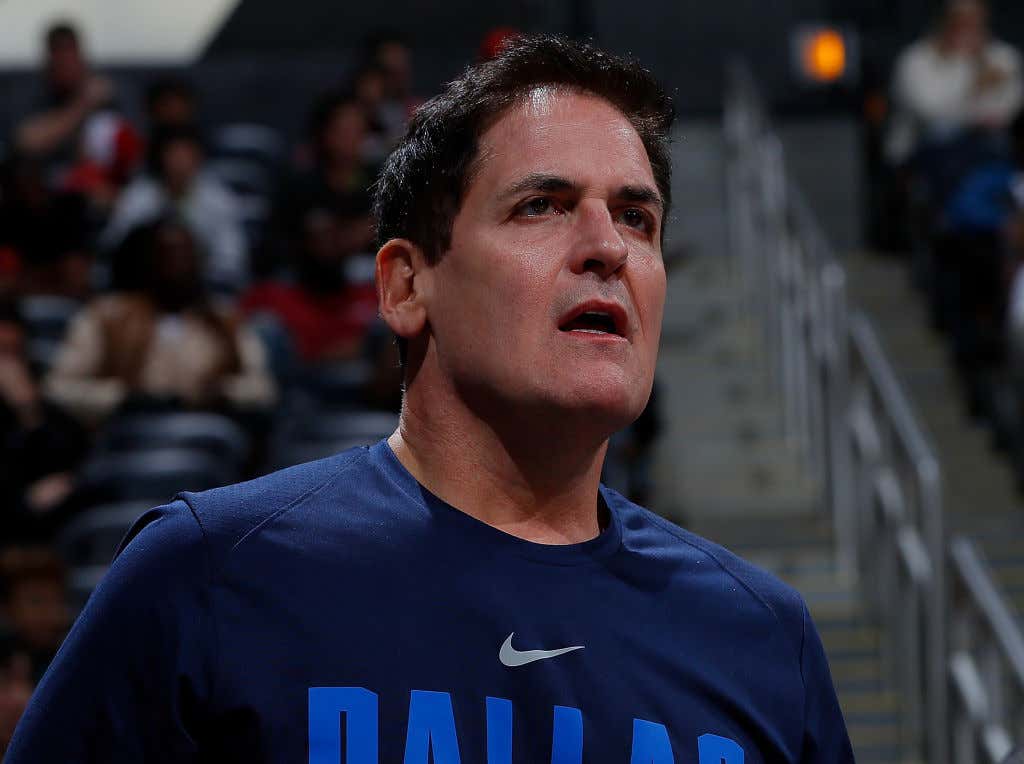 (ESPN) – Former Dallas Mavericks president and CEO Terdema Ussery has been accused of multiple incidents of inappropriate behavior toward female employees during his 18 years with the team, according to a Sports Illustrated report.

The report detailed allegations of sexually suggestive comments and inappropriate touching by Ussery, who was allowed to continue to work with the team — despite numerous complaints to the club’s human resources department — before his departure in 2015.

Shortly before the SI report was published Tuesday night, the Mavericks issued a statement that said they had launched an investigation into allegations of “various acts of inappropriate conduct toward women over a period of years” by a former officer of the organization. The team said the former employee in question left the club almost three years ago and that the organization was only made aware of the allegations in the past few days. It did not name the employee.

“The Mavericks organization takes these allegations extremely seriously,” the team said in the statement. “Yesterday we notified the league office and immediately hired outside counsel to conduct a thorough and independent investigation.”

So this is a big deal in the NBA world coming from a Sports Illustrated story that dropped yesterday. You can read the whole thing here, and I suggest you do because it’s pretty fucked up. Not only does it go on to describe how former CEO Terdema Ussery is a big time scumbag, but how he wasn’t the only issue within the Mavs organization. You probably don’t know who Ussery is, and basically he was a super smart guy that entered the NBA in the late 90s and rose the ranks incredibly quickly. There were talks he was even being considered to replace David Stern as commissioner. You could say he was a big deal within NBA circles. Well, he was also a big deal in being a complete piece of shit. He had a reputation of of doing shady stuff to woman in elevators, in that story it went to go on to talk about how he told a staffer she was going to get gang banged and all this stuff that is really really creepy and in no way acceptable for any professional workplace let alone an NBA franchise. Once he left the Mavs for Under Armor, it was more of the same behavior and he was forced out. The guy is trash. Once Cuban bought the team in 2000, Ussery was kept and extended.

Then the story went on to to talk about another Mavs staffer, this being a guy named Earl K. Sneed who wrote for Mavs.com. His issue wasn’t sexual harassment, he was instead the kind of lowlife scum that puts his hands on women. After his first domestic abuse issue with his girlfriend that led to him being arrested at the Mavs facility in 2012 nothing really changed. He didn’t lose his job. He then began dating another Mavs employee and guess what, he ended up punching her in the face too. This was all known to this new head of HR guy named Buddy Pittman, who turns out to be quite the scumbag himself. He knew this stuff was going on and he didn’t do anything. Sneed wasn’t suspended or fired or anything like that. If anything he was given a bigger platform on the Mavs TV show. I mean look at what their solution was

What the fuck is that? To me, it sounds like those in charge for the Mavs just wanted things to go away instead of addressing them like they should have. Isn’t it the job of the HR department to ensure a safe working environment for the employees? If anything, considering this Pittman guy was brought in to deal with the Ussery shit, and then knew about Sneed’s past, what the hell was this guy doing? What an asshole.

So how does this all relate to Cuban? Well it’s weird because you hear everything Cuban says now and it sounds right. Once he “became aware” of everything he cleaned house and gave the quotes you would expect from someone in his position, how he had no idea, how it’s unacceptable etc. But for me, I’m not so sure that passes the smell test. Mark Cuban is not an absent owner. The guy is involved in EVERYTHING that involves the Mavericks, but these are two situations he had no idea about? This part of the story makes me think that’s bullshit

In the forthcoming book, The Soul of Basketball, author Ian Thomsen asks Cuban how he is different from other owners. Cuban’s response: “The big difference is, being that I’m so close to everything that’s going around, you can’t bullshit me.”

What’s more possible, that Cuban really had no idea or that he had an idea and just told the people in place to handle it, while not knowing that those people in place were part of the problem. To me that sounds more logical. That he knew what was going on, but it wasn’t a story so nothing really happened. Why else redo the handbook and go through training and bring in Pittman if you had no idea these things were going on? Then SI got involved, uncovered some pretty awful stuff, and we’re seeing the damage control.

It wouldn’t surprise me if there are some out there that want Cuban to have to sell his team for allowing this type of behavior to go on for so long under his watch. I’m not sure how this all compares to Donald Sterling’s situation, but in my opinion it’s just as bad. You can’t convince me he didn’t know this abuse was going on, and that makes him just as responsible in my opinion. If you remember Cuban had this stance when that whole Sterling situation went down 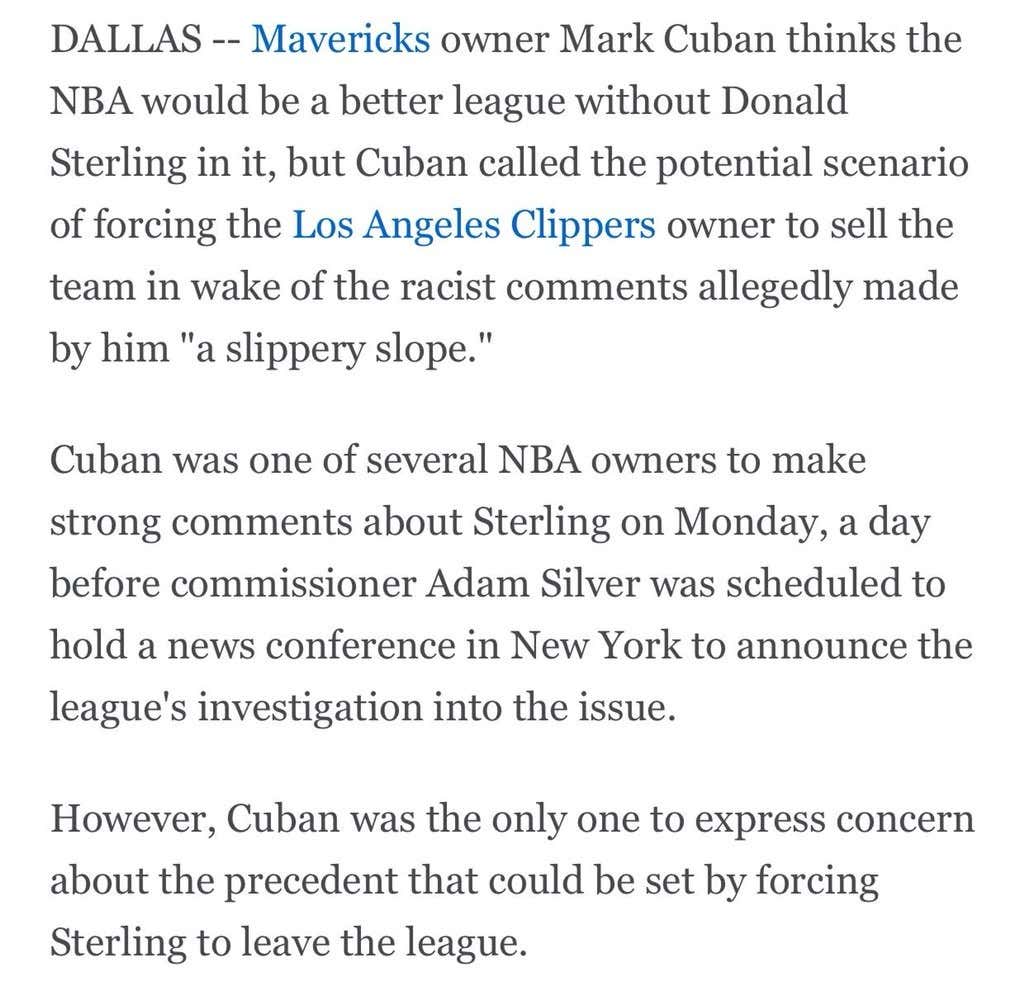 Maybe now we have an idea why he was so against it? Was he fearful that his own skeletons could become public and he would be forced to sell just like Sterling was? I could believe it.

Either way this whole situation is fucked up. If you look at the timeline there’s no way all parties didn’t know what was going on, and they chose to enable it by keeping those guys around. That’s inexcusable and pretty sickening because you have to wonder if all the money the Mavs were making during this time period was the main reason Ussery stayed in power. Fuck that.

Who knows what happens form here, but something tells me this is only going to get bigger.