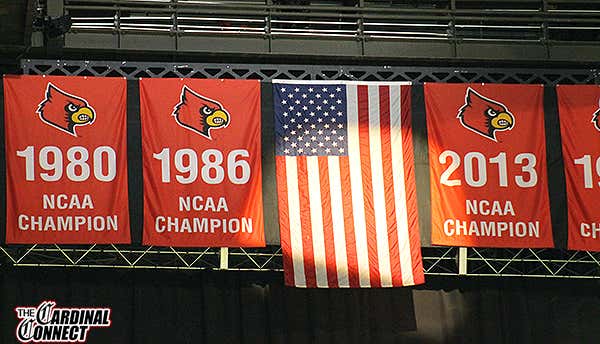 After waiting for news to drop about Louisville and the appeal process, we finally got something today. “Louisville must vacate men’s basketball records in which student-athletes competed while ineligible during the 2011-12 through 2014-15 academic years,” the NCAA’s statement read.

It’s significant in the fact that Louisville is now the first team since the Final Four became a thing to have to vacate its national championship. We’ve seen Final Four banners and runner-up banners be taken down before, but this is the first time the record book will show no national title, and I have a general thought on that.

I hate the punishment of ‘vacating wins’ or taking down banners. Those games happened and those teams won. I’ll always remember the Fab Five. I’ll remember Derrick Rose. I’ll remember Reggie Bush and I’ll remember Luke Hancock, Peyton Siva and the rest of the group winning that national title. Whether you think hiring strippers/hookers won them that title is another discussion, but the fact is they still went out and won the games. The banner is essentially just a memento of that and really what does it matter? This isn’t going to stop a team in the future from cheating, just because of vacated wins and a banner going down. It hasn’t stopped anyone before.

Now, remember this is just regarding the stripper/hooker situation and not anything that happened with the payment of players or FBI documentation. That punishment and what’s going on there will still happen at a later date once the NCAA can investigate after the FBI. It’s also worth noting that they FBI investigation and release of documents came with Louisville being on probation, something that was upheld here by the infractions committee.  Here’s what Louisville’s interim president Greg Postel had to say: 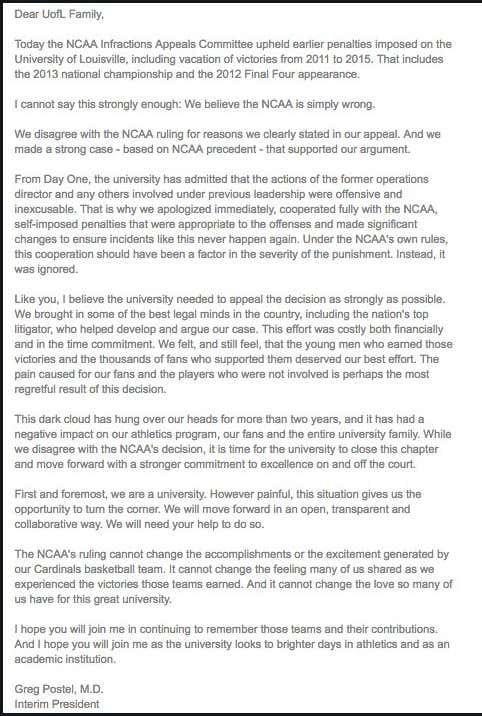 I’ll update this story as any new information comes up.