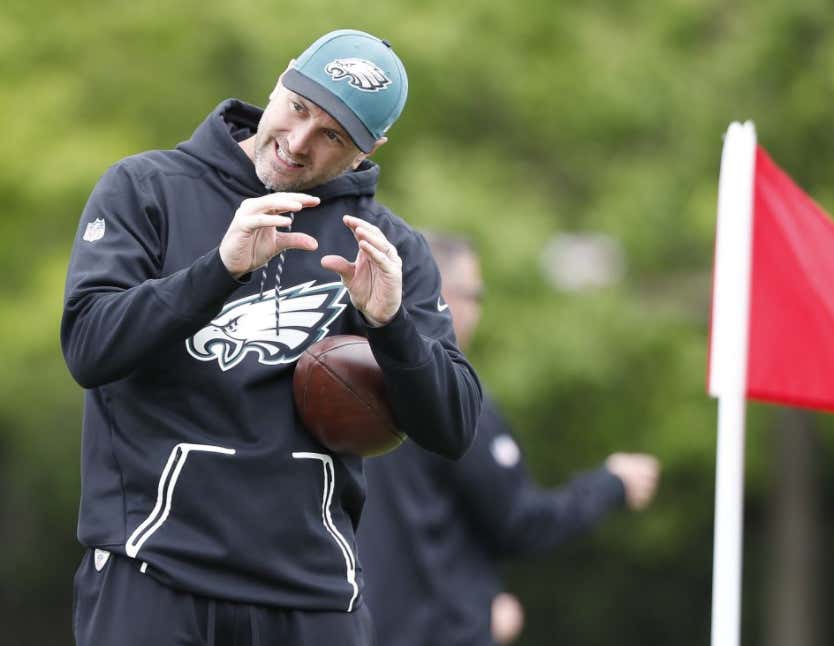 BGN – The Philadelphia Eagles reportedly have a new offensive coordinator. According to Tim McManus, the Eagles are promoting wide receivers coach Mike Groh to Frank Reich’s old position. Groh was one of two finalists for the position, along with Eagles running backs coach Duce Staley. Head coach Doug Pederson reportedly interviewed both Groh and Staley on Monday. It was previously reported that the Eagles might not hire a formal offensive coordinator and instead split the responsibilities between Groh and Staley. But that won’t be the case. Philadelphia hired Groh as their wide receivers coach last offseason after firing Greg Lewis. Groh seemingly did a good job in his first year with the Eagles; look no further than Nelson Agholor’s remarkable turnaround. As indicated in a deep dive by Peter King, Groh already had an involved role with the Eagles’ third down offense last season. Including playoffs, the Eagles finished with a 44.69% conversion rate on third down, which ranked second best in the league. It’s interesting that the Eagles passed on Staley, who first joined Philadelphia’s coaching staff in 2011. Staley has survived multiple head coaching changes and even interviewed for the Eagles’ head coaching vacancy himself in 2016. McManus reports Staley will remain at his current position.

Ahhhhhh, damn you Josh McDaniels and the Patriots! Again! If Frank Reich didn’t have to Blitzkrieg his way to Indy, this possible awkward situation wouldn’t have occurred. Well, at least not yet. Not Doug Pederson was force to promote one of two deserving coaches to the role of offensive coordinator while seemingly leaving the other one in the dust filled full of possible resentment. Obviously these guys are professionals and the Eagles team chemistry is off the charts, but still. You don’t like to see these situations happen. Both coaches are worthy of being the offensive coordinator.

You gotta trust Dougy P’s judgement of going with Groh. I mean, he’s a freaking Super Bowl winning head coach. You don’t dismiss a Super Bowl winning head coach’s judgment a month after they won the Super Bowl. I just feel bad for Duce. Smart money would be to brew up some pickle juice and let the Duce loose, but we’ll see how long before he heads towards other pastures. Staley was already in the running for the Giants OC spot before Mike Shula filled the role. Duce probably deserves a promotion somewhere after he masterfully oversaw the Eagles RB by committee this season. Hell, Legauratte Blount saying Duce Staley is the best coach he’s ever had. But for now, it’s a good thing Duce can certainly coach better than he can spell. Chrysanthemum.