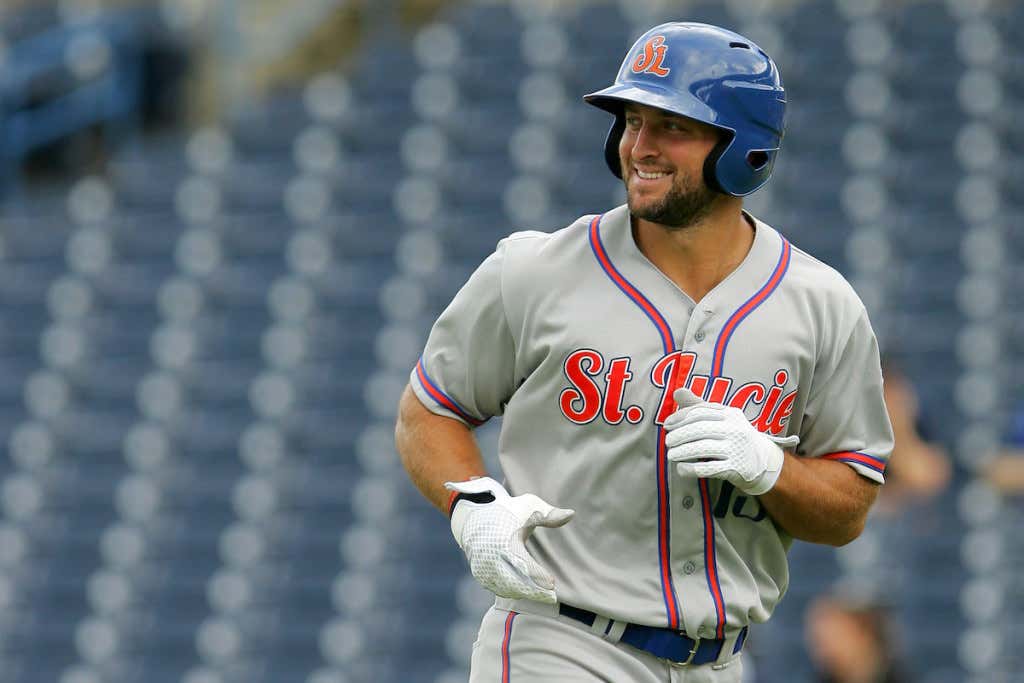 Tim Tebow has a lot of haters. I never understood why, and I’m certainly not one of them. Overly religious people freak me out, but I don’t hate the guy for it. I’m sure that his attempt to go from failed NFL quarterback to picking up baseball for the first time since high school with intentions of making it to the big leagues rubbed a lot of professional ballplayers the wrong way. That, I can level with. But why anyone outside of the game would root against this guy for trying to make it happen is beyond me.

When the Tim Tebow baseball experiment first got underway, I was honest in saying that I didn’t think there was any chance that he’d make it to the big leagues. If you watched his first workouts prior to signing with the Mets, then you’d know that he looked like one of those fitness models that had never played baseball in their lives but had to pretend to be a baseball player for a commercial, or some shitty actor trying to play the role of a baseball player in a movie versus an actual baseball player playing baseball.

For those who didn’t follow Tebow’s first season of professional baseball all that closely, he was actually promoted over the summer. Now, whether or not that promotion was to sell tickets in Port St. Lucie where Tebow’s core fan base is much closer than they would have been had he stayed in South Carolina with the Single-A Columbia Fireflies is neither here nor there. That being said, we can definitively say that Tebow was not the worst baseball player between Single-A and High-A where he played 64 and 62 games, respectively. Out of the 632 players who played at least 60 games at the Single-A and High-A levels, Tebow’s .656 OPS ranked 443rd!

I mean, a .656 OPS is complete trash but there were still 185 players who were worse than Tebow (three were tied with him). Moral victories here. But then we have this. Mets GM Sandy Alderson is out here making BOLD predictions.

Tim Tebow was respectable enough in his transition to baseball last season that the Mets are now increasing their expectations for the former Hesiman Trophy winner.

Noting the Tebow experiment has “evolved” into something greater, general manger Sandy Alderson on Sunday said, “I think he will play in the major leagues.”

“He is great for the team, he is great for baseball, he was phenomenal for minor league baseball last year,” Alderson said. “The notion that he should have been excluded from the game because he is not coming through the traditional sources, I think is crazy. This is entertainment, too. And he quietly entertains us.

Tebow will receive an extensive look in the Grapefruit League, according to manager Mickey Callaway, without stealing playing time from others. The Mets have just four healthy outfielders on their 40-man roster with Michael Conforto rehabbing from left shoulder surgery.

“We are going to evaluate Tim Tebow just as we would anybody else,” Callaway said. “Tim Tebow is here because he can potentially help us at the major league level at some point. He wouldn’t be here otherwise.”

Well then. I mean, I agree with SOME of what is said here. At the end of the day, this game is entertainment and the Tebow minor league tour has been wildly entertaining for the fans who have come out to watch him play. It’s been fun to keep up with the cell phone videos of Tebow hitting homers, walk-off hits, and saving the lives of fans in the stands. But they can’t seriously believe that he’s still going to come up and make an impact at the major league level, can they?

Even with an 18-year-old prospect, I wouldn’t take their numbers from their first season of pro ball at any level as an indicator of things to come, so I’m not really using Tebow’s underwhelming numbers in 2017 as an indicator of future performance. I just think it’s obvious in saying that time is not on his side. He could stick with this and improve every single year, but he’s going to be 31 this summer. He might get to the big leagues as some sort of publicity stunt, but in no world will Tebow ever get called up to a contending team that’s in need of a serviceable outfielder.

But then again, he has Jesus on his side so who the fuck knows. He’s probably going to get called up as soon as this year and break all the home run records that Rhys Hoskins set last year.