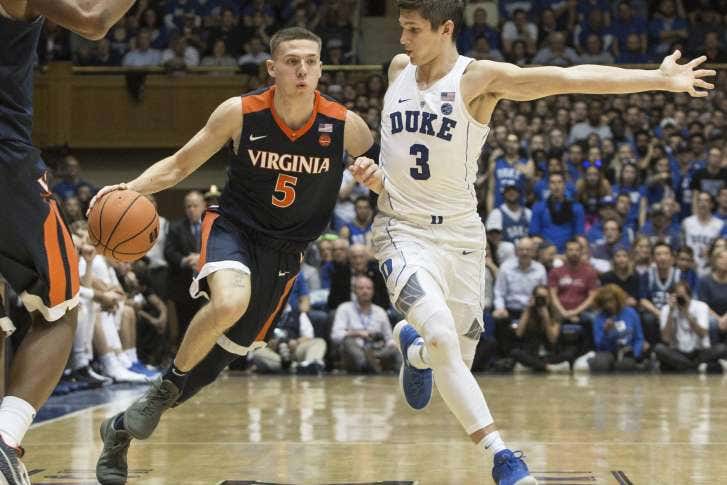 I know I typically do a contender series blog every Monday, but I decided to switch it up this week. There was way too much that happened across the country over the weekend to not talk about it and sort of recap where we are in college basketball. This is about the time that most people start truly getting into the sport and this year it’s even a bit different with the Big 10 title getting moved up a week (more on that later). Consider this a cheat sheet of sorts as we have just a few weeks left before you start filling out brackets.

ACC – The ACC is all but won by Virginia. The Cavaliers are 13-1 in conference play and hold a 3-game lead over Duke. The real race will be for the 3rd and 4th spot as the top-4 seeds get the double bye in the ACC Tournament. Right now UNC is 10-5 in 3rd and Clemson is 9-5 in 4th. Virginia Tech, Louisville and NC State all have just 6 losses.

Big 12 – Ah, the old can Kansas continue its streak of winning the Big 12 regular season title. Well, we’ll pretty much just find out on Saturday when they go to Lubbock to play Texas Tech. Right now both teams are tied at 10-4 with Texas Tech already having the road win at Kansas on the resume. Keep an eye out for Keenan Evans health as he left the Baylor game with a toe injury.

Big East – Another streak that’s trying to survive is Nova winning the Big East title again. It did its part by sweeping Xavier over the weekend tying them with the Musketeers. However, Nova still has to play at Seton Hall and Creighton while Xavier has just three games left compared to Nova’s four.

Big 10- Right after it seemed like Ohio State was set to win this thing it dropped two in a row while Michigan State continued to win. The Spartans are now a game up on Ohio State and Purdue with just two left. Michigan State has to drop one to Illinois (home) or Wisconsin (road) to lose out on the title. Hard to see that happening.

SEC – Despite the injury to Anfernee McElmore and the loss to South Carolina, Auburn continues to keep a 2-game lead over Tennessee in the SEC. However, this conference race could be a little more open as we see weird losses happen all the time. Auburn closes with Alabama, Florida, Arkansas and South Carolina. It’s easy to see two losses there, the question is can Tennessee win out?

Pac-12 – Another conference with a two-game lead. This time it’s Arizona with the lead over UCLA and USC. Arizona should win this as they close with Oregon State, Oregon, Stanford and Cal. Not exactly a murderers row and two wins all but clinches for Arizona, especially since UCLA and USC play each other to end the season.

AAC – This race now got interesting after Cincinnati dropped two in a row. They are a game up on Wichita State with a trip to Wichita coming to end the season. If both teams win out, Wichita has a chance to sweep Cincinnati on the last day of the regular season. Houston also looms at 11-3, just one game behind Cincinnati and tied with Wichita State.

Teams in contention for a 1 seed:

Right now there are three teams that are comfortably on the one seed line – Virginia, Villanova and Xavier. Virginia is all but a lock considering they are winning the ACC regular season. As long as they don’t implode down the stretch they are a one seed. Nova and Xavier just have to win out or perhaps drop one more at most. If they share the Big East regular season, it’s hard to see them dropping out of the one seed line, especially with the carnage going on behind them. Then the other teams in contention include Michigan State, Duke, Kansas and Texas Tech. Saturday’s game is essentially an elimination game between Tech and Kansas. Whoever wins the Big 12 should likely be the fourth No. 1 seed. Michigan State is going to lack the resume compared to the others due to the Big 10 being so bad, but they are easily one of the four best teams in the country. If they win both the regular season and Big 10 conference tournament and get help elsewhere they’ll be in. Then there’s Duke. I don’t think they’ll be a one seed, but the resume has some nice wins. Finishing second in the ACC regular season and winning the ACC Tournament with perhaps a win over Virginia in the title game could vault them there. But, that’s the list.

Nay, regressed is actually the wrong word here. He’s become exhausted. Trae Young is and was the story of college basketball all year. A consensus top-25 recruit, but not one that was expected to be a full on star this year blew everyone away by putting up numbers we’ve just never seen before. He propelled Oklahoma to wins at Wichita State and USC in the nonconference. He was energetic, must-see TV. Now, he just looked exhausted. When you watch him play you can see the exhaustion and the one-time player who could break anyone down off the dribble has hit a wall. That’s not surprising when he had such a high usage rate and took a bit of a beating in the way he attacked the paint. He’s still real good, which I know people will be shocked to hear because you have to have an erratic hot take one way or another.

Last week it was announced that Andy Kennedy would be stepping away from the Ole Miss job at the end of the year, starting the coaching carousel. However, that changed over the weekend with Kennedy stepping down immediately, leaving assistant Tony Madlock in charge. However, what this does is now let Ole Miss come up with a plan on who to target once they are allowed to start the interviewing process hire someone. Names to keep an eye on here: Steve Forbes (ETSU), Kermit Davis (MTSU), Eric Musselman (Nevada) and the longest shot of all being Mike White returning home from Florida.

There are great teams, just no scary teams

This has been the narrative all year – that there are no great teams. That’s not true. There are some great teams, there just aren’t the scary teams that we’ve seen in year’s past. There isn’t that 2015 Kentucky team, the 2015 Duke team, the 2012 Kentucky team, the 2014 Arizona team, etc. That’s why we’re seeing so many upsets this year and the parity that everyone is talking about. Another reason is the fact that upperclassmen are declaring for the NBA Draft now since they can test the waters and get true feedback. Combine all that with an okay freshman class and this is what you get. It’s why the NCAA Tournament is going to be absolutely awesome, because it’s so much up in the air.

Speaking of that, it doesn’t mean there are 100 title contenders. There are a bunch of teams that can make a Final Four but in terms of true national title contenders, there aren’t many. My list would be Villanova, Xavier, Michigan State, Duke, Virginia, Arizona, Texas Tech, Kansas and maybe Purdue. That’s really it. As Mark Titus said to me the way he likes to determine who is a title contender is say ‘if team X is the national champion’ does it sound right. Then throw in having a true NBA player – every title team has that and that’s where you get the list.