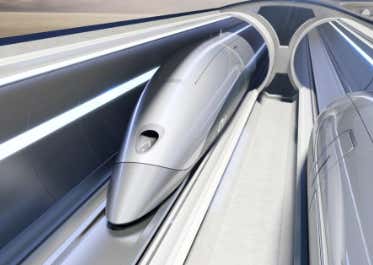 Source - One of the two major dedicated companies pursuing the creation of functional Hyperloops (high-speed tunnel transportation that can zoom pods around in low pressure) has signed its first agreements that could lead to an interstate Hyperloop system.

The deal with Hyperloop Transportation Technologies includes agreements with both the North Ohio Areawide Coordinating Agency and the Illinois’ Department of Transportation to start work on a feasibility study, the first step of determining whether it’s even possible to build a route before beginning work in earnest. The study will focus on determining the viability of a number of different corridors, all the with the goal of connecting Cleveland and Chicago.

HTT notes that Ohio’s legislature passed a resolution supporting the initiative in January of this year, and that it’s also worked with congressional representatives from multiple states to jointly send a formal letter to the Trump administration asking for federal funding support for building out a Hyperloop network.

Most of the work is still in the planning phase, however, so watch this space for news of breaking ground and commencing construction, which is hopefully the next step for at least some of these initiatives.

In the words of Kenny Powers, “finally mother fucker.” This took WAY too long to come to fruition. Granted, it’s only a contract, but still. It’s a huge step towards making the Hyperloop a reality.

For those of you who don’t know, the hyperloop is essentially a super-fast subway. It’s a closed tube system that travels at an average speed of 600mph and can reach speeds of up to 720mph. In other words, you can get where you need to go fast. Really, really, fast. Boston to Providence in nine minutes. New York to DC in twenty-four minutes. Chicago to Pittsburg in about forty-seven minutes. You can check out the full list here. The initial plan is to create a route in Northern Ohio. Which I can only assume is because if something were to happen no one would care, but I could be wrong.

I’m sure it’ll be years until the first Hyperloop is completed but it’s exciting nonetheless. They just need to keep the prices high so it doesn’t turn into the subway. That’d ruin it for everyone. Imagine sitting in your hyper-chair and some guy walks by and asks for change or starts the “excuse passengers’ monologue. No thanks. There’s far too much time between stops. At least on the subway you know that every thirty seconds you have a chance to escape the misery.

As cool as this is, I’d love to see them use the technology in a more practical way. Make some mini-loops or something. Like one from 12th ave to 5th ave or my door to the Rite Aid. That would be amazing. Regardless, it’ll be great when the whole thing is done. I’m all in on the hyperloop.