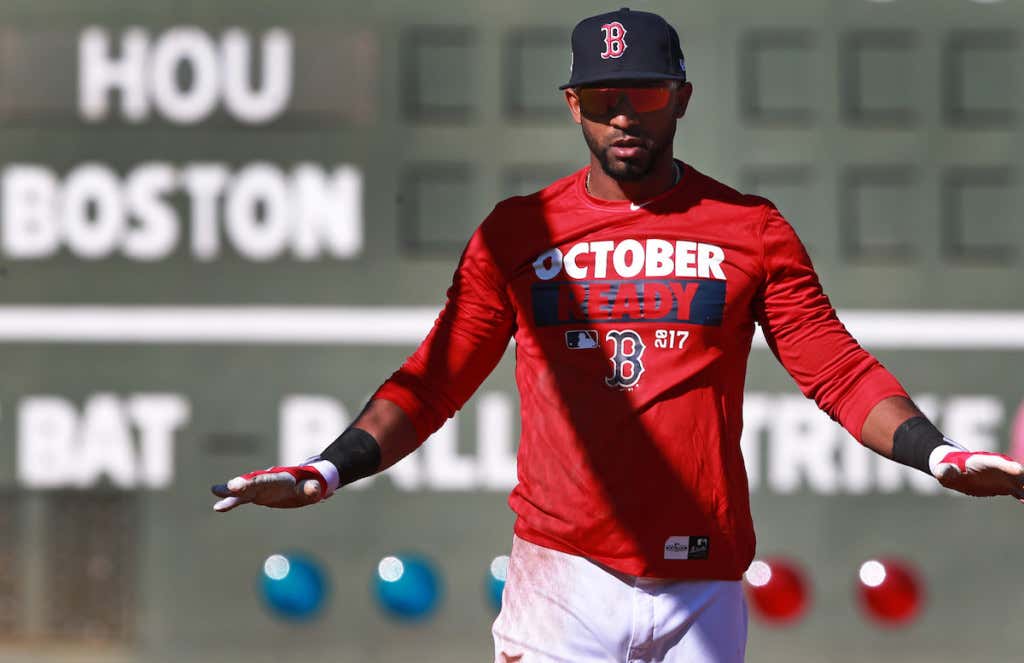 The eagle has landed. The Red Sox have re-signed infielder/kind of outfielder Eduardo Nunez to a one-year deal with an option for a second year. There has been a growing impatience amongst not just Red Sox fans, but baseball fans in general, about the slow pace of this offseason. And this also happened when the Red Sox re-signed Mitch Moreland to a two-year deal — a sarcastic reaction because neither player really moves the needle in terms of fan interest or ticket sales, and certainly neither of them serves as a “response” to the Yankees acquiring Giancarlo Stanton this past winter. However, both Moreland and Nunez are much needed signs that you have to commend Dave Dombrowski for.

Had JD Martinez signed elsewhere by this point, then yeah, go right ahead and make your snarky remarks about how the Red Sox haven’t gotten any better. You can talk about how they’re virtually the same team as they were last year by retaining the exact same roster and re-signing the guys who were already here a year ago. That being said, it’s baffling to me when I see fans who look at that as a bad thing. It’s not a great thing by any means, but it’s not something worth getting bent out of shape over, either.

Have the Red Sox done enough to make themselves a World Series contender? No, they have not. But in retaining the same team from a year ago, they’re putting the same team on the field that won 93 games and a division title. The counter to that is obviously, since when is a division title good enough? You’re right. It’s not. But it’s a damn good start if you’re going into the postseason as American League East champs. The Red Sox ran into a buzzsaw last October and got worked by the eventual World Series champions. That happens. That exact same thing happened to the 2005 Red Sox one year after winning the most important championship in Boston sports history.

The difference here is that the 2017 Red Sox were not coming off a championship. They are now coming off back-to-back division titles with back-to-back first-round exits. Dombrowski knows that’s not acceptable in this market, hence why the Red Sox are still pursuing free agent outfielder JD Martinez to give Boston’s lineup a vital boost in the power department.

But since this is about Nunez, I think once you strip away the frustration of Martinez still sitting out there as an unsigned free agent, a logical fan can acknowledge that Nunez was both very productive once acquired by the Red Sox last year, and will also play a crucial role to Boston’s success in 2018. Dustin Pedroia is coming off knee surgery, and although he’s targeting Opening Day for his return, we can’t be so sure. And not only can we not be sure of his target return date, we also can’t be sure that he stays on the field for the entire season because of his lengthy injury history throughout his career.

Nunez provides you with a more than capable option at second base if Pedroia is unable to go at any point this season, and he can give a guy like Xander Bogaerts a day of rest during the dog days of the summer, something that the 25-year-old shortstop has complained about publicly in the past. You also have to consider that this will serve as Rafael Devers’ first full major league season, so he’s going to need a breather from time to time at third base, a position that Nunez also played for the Red Sox last season.

Prior to signing Nunez, the Red Sox were throwing around the idea of using Blake Swihart at second base, who, as you might remember, was once the top catching prospect in baseball. He injured himself in left field, and that’s pretty much the last we’ve seen of him. Deven Marrero is also an option at second base, as he’s an excellent fielder, but while Nunez has had his struggles at times defensively, you can’t dismiss the fact that he came in and hit .321 with an .892 OPS in 173 plate appearances with Boston last year.

I get that you’re frustrated. I get that your interest in the Red Sox might not be what it once was, whether that’s from winning three championships or whether that’s because they have maintained versus improving, or a combination of both. But I can tell you one thing — this 2018 Red Sox team, with or without Martinez, is not getting enough credit for how good they’re going to be. No one seems to be factoring in that, barring injury, you’re getting full seasons of David Price back in the rotation, and both Carson Smith and Tyler Thornburg joining that Red Sox bullpen that was really good without them a year ago.

Let’s hope that the next time we hear about the Red Sox adding a player, we can change the narrative from Dombrowski fielding the same team as last year to Dombrowski fielding a team that fans can buy into as a legit contender for a World Series title.